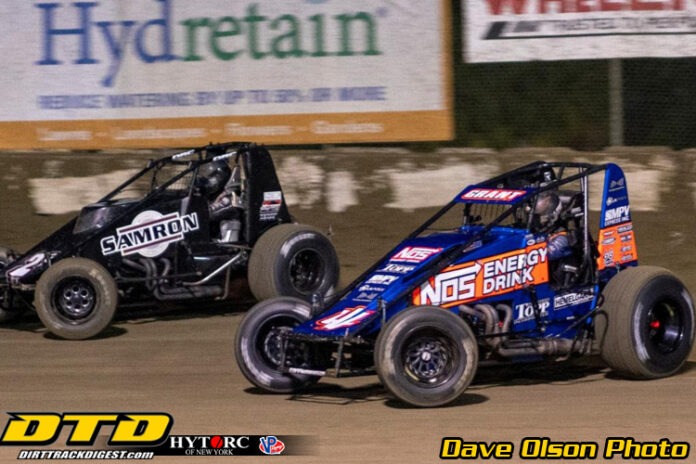 OCALA, FL – If there was to be a proposition to rename the second month on the 2022 calendar, it would most likely have to be changed to “Justin Grant.”

In a feature that started at 1am local time due to a nearly three-hour rain delay, Grant swept around the outside of Carson Short on lap three, then staved off a handful of late race cautions to earn his first series victory of the year in his TOPP Motorsports/NOS Energy Drink – MPV Express – TOPP Industries – LA Poly/Maxim/Kistler Chevy.

The win was the 29th of Grant’s USAC National Sprint Car career, moving him into sole possession of 18th all-time ahead of Don Branson, A.J. Foyt, Levi Jones and J.J. Yeley on the list.

For a winning performance to transpire on this evening, the recipe was there, and the ingredients were such that even if he had absorbed a lethal challenge to his stranglehold on the race lead, it would only occur because of his own undoing. However, Grant wasn’t about to let any of that happen.

“I was really confident in our car,” Grant explained. “I felt like I could make enough time getting off four and going back to the bottom of one, that even if someone was really better, I didn’t know what they were really going to be able to do with me. I felt pretty good there and I just needed to not make any mistakes and bring the thing home.’

Grant started his race from the pole position and, for the first two laps, dueled with one-lap track record holder Carson Short for the top spot. Short held the upper hand for the first two circuits, leading at the line by a single car length at the conclusion of lap one and a full two lengths at the completion of lap two as Grant continued to present a challenge to the inside of Short.

On the third lap, Grant’s persistence paid off as he carved to the inside of Short and burst off turn two with the lead in his grasp. Short, nonetheless, continued to scrap and bolted around the outside of Grant on the back straightaway while completing the fourth lap. As Short exited turn four, however, a slight step-out slashed his momentum as Grant powered by at the exit to reassume the lead.

Short’s tenure near the front of the field came to a close when he slowed on the front straightaway with 16 laps completed. He’d return to finish a decent eighth. When racing resumed, Fatheadz Eyewear Fast Qualifier Buddy Kofoid plotted his charge up the running order, sliding to the inside of Thursday night winner Axsom in turn one for the second position on lap 16, promptly gapping Axsom, but still had a mountainous one second interval to erase between he and leader Grant.

On the 24th lap, contact between Thomas Meseraull’s right front and Jason McDougal’s left rear in between turns one and two sent the eighth running Meseraull spinning to a stop and the seventh-place car of McDougal slowing dramatically with a flat left rear tire. As Meseraull’s car rest near the outside wall, a brief moment later, Ballou nosed right into Meseraull’s right rear, sending Ballou’s machine snapping around and catching the wall.

Ballou, who earlier in the night had endured five flips during a semi-feature incident, was undeterred as he sprinted all the way across the track following the accident in order to prepare the backup car for a provisional feature starting position and had charged from 23rd to 11th prior to the crash amid a monumental milestone in which he became the seventh driver ever to make 400 career USAC National Sprint Car feature starts. Ballou finished 19th, Meseraull 20th, and McDougal in 12th after restarting.

Grant escaped Kofoid’s pursuit on the ensuing lap 24 restart and reconstructed a 1.2 second lead with three laps to go when, suddenly, eighth running C.J. Leary lost power in turn four. Ninth place Brady Bacon had nowhere to go and ran into the back of Leary, resulting in both drivers stopping. Leary finished with an 18th place result while Bacon took 15th.

Diverting from his racelong path, Grant went topside down the stretch with Kofoid hanging in the wings about five car lengths back of Grant and not in position to make a last ditch effort to put it in victory lane for the first time in his USAC National Sprint Car career.

Grant closed it up, locked it away and chalked up the 0.636 margin of victory for the night over Buddy Kofoid, Emerson Axsom, Chase Stockon (11) and Tanner Thorson.

It was a podium featuring the veteran Grant as the undeniable force up front all while a pair of series Rookies and midget racing standouts gave Grant a chase throughout much of the 30-lap, $5,000-to-win feature event.

“These guys are tough, Buddy and Emerson, they race so hard coming out of midgets,” Grant said. “I’m having a ton of fun racing with those guys and am looking forward to racing with them as the year goes on in the sprint cars.”

“This was by far the best I’ve ever felt in a non-wing sprint car,” Kofoid praised. “I think we were a little on the tight side this time and a little low air pressure hurt us at times. Once I got going, I felt like I was just as fast as Justin. He’s been really good here and hopefully tomorrow we can beat him.”

Axsom (Franklin, Ind.) is both the USAC National Sprint Car point leader and is the high point man in the Winter Dirt Games XIII Sprint Car standings going into Saturday night where he’ll be among the favorites after backing up his win another fine performance in his Clauson Marshall Newman Racing/Driven2SaveLives – ZMax Race Products/Spike/Kistler Chevy.

“I’m just glad we had a good run tonight so we can’t say last night was a fluke,” Axsom stated. “That was on me to have a good run and I feel like we did. We were really solid; it’s just that these guys are really good up here in front of me. It’s tough to beat them and we must be on our A-game.”

On Friday, Shane Cottle (Kansas, Ill.) became the 19th driver to start 300 career USAC National Sprint Car features, and he made it a pretty stout one. He blitzed from 21st to 10th to earn a $100 bonus from Irvin King as the night’s feature hard charger in his Hogue Enterprises/Boulevard Truck Repair – Bout The Hops Brewing – VP Racing Fuels/DRC/Rider Chevy.

“It was definitely hard to make a pass but down in turns three and four, we could stick it on the bottom, and if they missed it, they’d slide up in the slick and we could shoot underneath them,” Cottle explained. “It was a real technical, tricky track, but it was fun.”

In the grand schemed of Winter Dirt Games, Grant, Kofoid and Axsom are the five drivers locked into Saturday night’s $10,000-to-win feature, along with Kyle Cummins and Chase Stockon.

One-and-a-third Fatheadz Eyewear Qualifying sessions were technically held on Friday night. The initial attempt at qualifying lasted only through 16 of the 43 cars being qualified when the rain hit. With the substantial downpour and subsequent complete track rework, by rule, time trials completely started over. This is so all drivers will have the opportunity to compete uninterrupted on the same track surface.