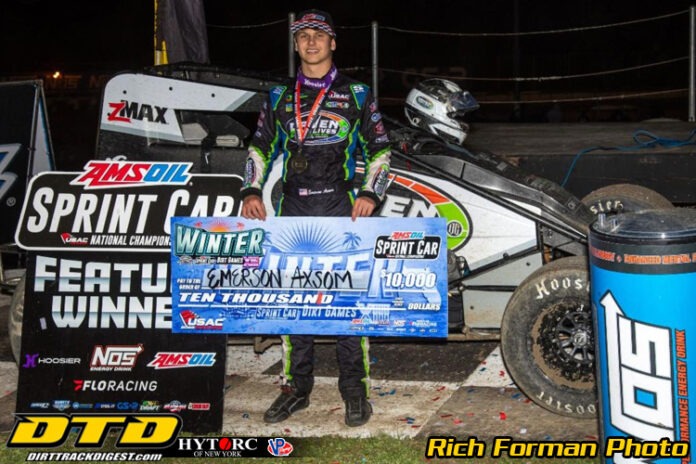 OCALA, FL – Following Friday night’s Winter Dirt Games XIII USAC AMSOIL Sprint Car National Champion feature, Emerson Axsom expressed the sentiment that he was pleased with his third-place result because, by doing so, it proved that his victory in Thursday’s season opener was no fluke.

The collective sentiment of the racing world following his second series victory in a span of three nights at Ocala, Florida’s Bubba Raceway Park is that Emerson Axsom, unequivocally and without a doubt, is no fluke.

The 17-year-old series Rookie is $10,000 richer after Saturday night’s victory, which he began from the fourth position but chased down race-long leader Chase Stockon for the lead with 11 laps remaining in only the second ever 35-lap feature held in series history. The only other event of that distance – a rain-shortened race in May of 2006 at Anderson (Ind.) Speedway – was won by Darren Hagen.

From there, Axsom closed the lid on a breakout weekend by becoming the first driver since Kevin Swindell in 2008 to capture his first two career USAC National Sprint Car wins within a 48-hour span. Axsom did his work at the controls of the Clauson Marshall Newman Racing/Driven2SaveLives – ZMax Race Products/Spike/Kistler Chevy.

“This is way better than two nights ago; we had to race for this one,” Axsom exclaimed. “Like I said after that one, I just had to get after it non-wing sprint car style. This thing was on rails. It wasn’t me; it kind of drove itself out there to be honest. This team is one whole big family and I love these guys to death. I wouldn’t want to drive a racecar for any other team.”

With a unique format in place for Saturday’s event, Emerson Axsom had already locked himself into the feature lineup by virtue of his points accumulation throughout the previous two nights of racing. A six-lap dash featured the top-five in Winter Dirt Games sprint car points, plus three more qualifying race winners from Saturday night. There, Axsom finished fourth and lined up outside the second row for the main event.

A front row with a delectable southern Indiana flavor led the field to the green flag, with Stockon emerging as the early leader following several side-by-side laps around the 3/8-mile dirt track versus pole sitter Kyle Cummins. Meanwhile, it took 11 laps for Axsom to muscle his way past Cummins into the runner-up spot on the bottom of turn two.

Stockon hit his stride using the top side, but gradually began to lose ground when Axsom got ahold of the bottom right around the midway point. On lap 20, however, Stockon finally got wind of Axsom’s nose, front bumper and front wheels, which entered the peripheral vision of Stockon. Stockon responded by protecting the bottom between turns three and four to keep on hangin’ on, just as the yellow flag was displayed.

In this incident with 16 laps remaining, eighth running Robert Ballou and ninth-place Jake Swanson collided on the front straightaway, sending Swanson into the outside wall before crawling to a stall on the bottom of turn one. Swanson took umbrage due to the incident and, after climbing from his car, pump faked a steering wheel throw at the passing car of Ballou under yellow. Swanson was knocked out of the race while Ballou continued onward to finish eighth, but the fireworks that started on the track between the two continued into the pits following the checkered.

Back up front, the sly Axsom knew Stockon had spotted his attacker on the radar prior to the caution. However, a brief move to the top shelf by Axsom with 13 laps remaining on the ticker forced a counter-reaction from Stockon, who inched off the bottom, and parted the seas for Axsom to take advantage, although both Justin Grant and, ultimately, Tanner Thorson soon posed a potent threat.

“(Chase) saw me on the bottom there and moved down but he didn’t fully see what I was doing,” Axsom revealed. “So, I was still able to get a run on him and kind of trick him there in three and four and just pull up to the side of him. He moved up and left me a lane.”

It took a couple shots, and a caution period to ponder, but Axsom now had course of direction and a course of action to take, which he attacked.

“I was trying the slider line into one and two and just rolling the bottom in three and four,” Axsom explained. “Chase was definitely the best car when he was on the top all the way around, but I just went for it on the bottom of three and four and tried it and it just so happened that it was good. I kind of saw the top getting so far up that it was above the flat. Usually when it does that, it slows down a lot. I just went down there and tried it and I gained about a straightaway on him in two laps. I didn’t know if anybody behind was just as good, but I knew we were really good and that’s when I knew I had to stick with what I was doing.”

With eight laps to go, Thorson fired by Stockon to take over second and began his pursuit of Axsom for the race lead. A caution for the slowing Shane Cottle on lap 30 impeded the proceedings momentarily just as Thorson was cutting his way into Axsom’s lead. With the frontrunners bunched up for the final restart, Axsom inserted the dagger as he burst away from Thorson and the remainder of the field to exponentially extend his commanding lead down the final stretch.

Axsom left all challengers in the rearview as he crossed the stripe 2.536 seconds ahead of second place finisher Thorson with Stockon third, Friday night winner Justin Grant fourth and Brady Bacon fifth.

Thorson (Minden, Nev.) carved his way through the field to challenge for the lead late, finishing 2nd after starting 14th in his Reinbold-Underwood Motorsports/AME Electrical – Mesilla Valley Transportation/Spike/Stanton Chevy, a performance which netted him a $100 bonus as the night’s Irvin King Hard Charger, recovering from a tumultuous couple of nights in which he finished 19th and 5th.

“It makes it better,” Thorson said of his runner-up finish compared to the past couple of evenings. “It goes to show how good my guys are without giving up on me and letting me do what I do; my guys didn’t give up in me. I just came up a little bit short. I wish we would’ve started a little further up and we might’ve had a shot at the 47, but we’ll try again next time.”

Stockon (Fort Branch, Ind.) led a race-high 24 laps and concluded a successful Winter Dirt Games with a 3rd place result in his KO Motorsports/Hutson John Deere – Superior Tank & Trailer – AMSOIL/Flea RC/J & D Chevy. With a 7th, 4th and a 3rd this weekend, it’s the first time Stockon has finished three-straight USAC National Sprint Car features inside the top-7 since the end of 2020.

“The first part of that race, we were really good, almost too good,” Stockon lamented. “I kind of knew we’d be a sitting duck running out front and the track started taking rubber in a few places. I saw Emerson coming and I knew I needed to move. We just fell two spots short, and we have nothing to hang our head about. That’s for sure.”

“The crew worked their butts off,” Rogers praised. “We changed everything possible on that racecar and ended up coming around full circle, getting back to where we started, and we ended up being pretty fast.”