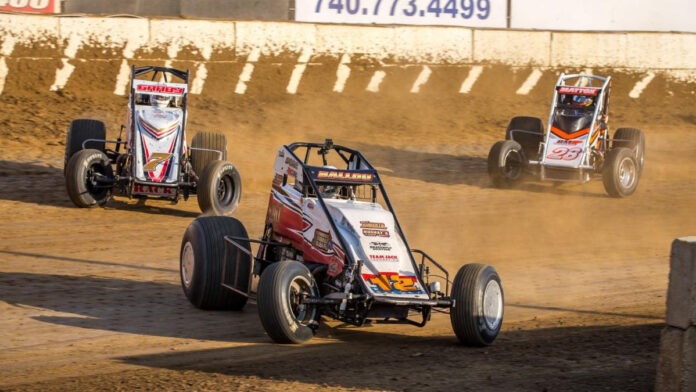 OSBORN, MO – Over the decades, a total of twelve Friday the 13th movies have been produced. In USAC racing’s history, 19 such events have taken place on the 13th day of the month on a Friday.

Number 20 arrives this Friday night, May 13, when the USAC AMSOIL Sprint Car National Championship returns to Osborn, Missouri’s U.S. 36 Raceway after a decade away from the speedy 3/8-mile dirt oval for the $6,000-to-win and $600-to-start 30-lap main event.

The race is co-sanctioned by the Wholesale Batteries Midwest Wingless Racing Association that’ll compete in conjunction with the national series. The USAC national portion will pay full points toward the championship while the MWRA event is considered a non-points special event toward its season championship.

Robert Ballou and Justin Grant are among the array of drivers who’ve won on Friday the 13th in their USAC National Sprint Car careers. Ballou did so in 2015 at Perris (Calif.) Auto Speedway while Grant got it done in 2019 at the Terre Haute (Ind.) Action Track.

Those two also just so happen to be among the proud and the few in this Friday’s driver lineup who competed with the USAC National Sprint Cars at U.S. 36 in the one and only appearance back in 2012. Ballou (Rocklin, Calif.) won his heat and finished 11th in the feature that night while Grant (Ione, Calif.) finished 10th and Chase Stockon (Fort Branch, Ind.) corralled a 4th place result.

Dynamics, Inc. and the Baldwin-Fox teams were in the field a decade ago as well, with Darren Hagen driving the Dynamics car to a 13th place finish and Thomas Meseraull piloting the Baldwin machine to 14th. Those two stalwart teams continue strong to this day with Dynamics and Brady Bacon (Broken Arrow, Okla.) leading the charge after scoring a victory in the series’ last outing at Ohio’s Atomic Speedway in April, while Baldwin-Fox brings Logan Seavey (Sutter, Calif.) and Alex Banales (Lafayette, Ind.) to the show for their U.S. 36 USAC debuts.

The high, high majority of U.S. 36 sprint car experience in Friday’s field comes from the USAC MWRA contingent. Wyatt Burks (Topeka, Kan.), the 2020 MWRA champ, has captured victory in all three of MWRA’s visits to the track between 2020 and 2021.

In those same three events, Wesley Smith (Billings, Mo.) notched three successive top-five results with 3rd place finishes in both 2020 features along with a 5th in 2021.

Chris Parkinson (Gladstone, Mo.), the 2014 WAR Sprint Car champion, scored a third with WAR in 2017 at U.S. 36. The third generation of the legendary Parkinson family, grandson of Ralph and son of Junior, also finished as the runner-up behind Burks in the 2020 MWRA contest at U.S. 36.

On Friday, the USAC AMSOIL National Sprint Cars will be accompanied by E-Modifieds and Pure Stocks.

Pits open at 5pm Central with the grandstands opening at 6pm, the drivers meeting at 6:30 and cars on track at 7pm with qualifying and racing immediately following.

Friday’s action from U.S. 36 Raceway can be watched live and on-demand on FloRacing at https://bit.ly/3dgONXz.

It’s all part of a mega three-race weekend for the USAC AMSOIL Sprint Car National Championship in Kansas and Missouri. Thursday starts the weekend on May 12 at Lakeside Speedway in Kansas City, Kan. for the first time in five years; followed by the return of the series to Osborn, Missouri’s U.S. 36 Raceway after a decade absence on Friday night, May 13; and the first run at Odessa, Missouri’s I-70 Motorsports Park’s dirt track in 40 years on Saturday night, May 14. 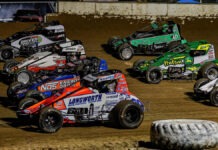