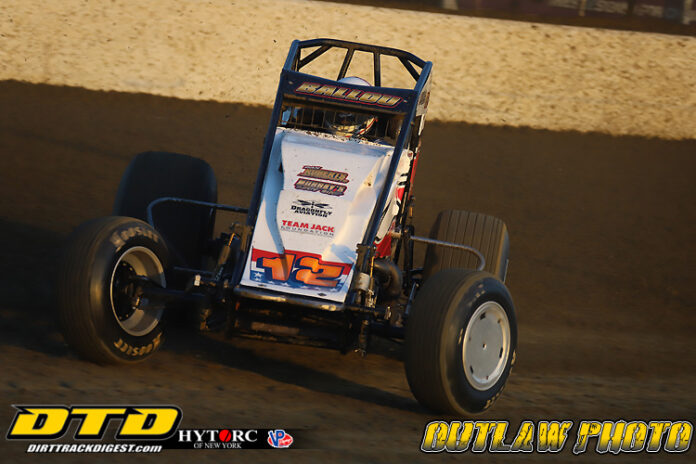 After running second to Bacon in each of the past two series events in April at Ohio’s Atomic Speedway and on Thursday at Kansas’ Lakeside Speedway, Ballou turned the tables to reach victory lane for the first time in 11 months and for the 32nd time in his USAC National Sprint Car career, moving past Tyler Courtney and into a tie for 14th on the all-time list alongside 1973 series champion, Rollie Beale.

As fate would have it, Ballou (Rocklin, Calif.) had to withstand a late-race bout with Bacon to earn Saturday’s victory, dominating for the majority of the first two-thirds of the 30-lapper before being overtaken by Bacon with a mere nine laps remaining. However, the never-say-quit Ballou immediately clawed his way back to the lead a half-lap later and put the clamps on Bacon’s bid for a third-straight triumph, securing the lead all for himself for the final eight laps to earn his first victory celebration of 2022.

While Ballou will undoubtedly one day be enshrined in the HoF, just the same as Gary Bettenhausen, Sheldon Kinser, Jeff Swindell, Steve Butler, Tony Stewart and Eric Gordon, he now shares a common trait that each of those aforementioned racers possess on their resume – a USAC National Sprint Car victory at I-70 Motorsports Park.

“I’ve said since the beginning of the year that this is going to be the Bacon/Ballou show,” Ballou exclaimed. “Bacon’s got the best racecar, but I just wanted it a little worse tonight. It’s been a tough season and we’ve had a lot of problems, but I’ve got a lot of good guys behind me.”

In a myriad of ways, Ballou’s early season form is the type he hasn’t experienced since his USAC National Sprint Car title campaign of 2015. From his engine program on down to the shocks, Ballou has found the competitive fire and edge to regularly compete for victories in his Ballou Motorsports/Suburban Subaru – Dragonfly Aviation – Berks Western Telecom/Triple X/Ott Chevy.

“We got ahead of the game in 2015, and I kind of snuck up on everyone with the best engines in the country,” Ballou explained. “Then we laid in the weeds for a little while and got caught with our pants down. Now we’ve got some bullets under the hood, and I think we can keep up with the rest of these guys. We’ve got a brand new one coming for Eastern Storm, so I think it’ll be even better.

Ballou started his race from the outside of the front row but watched as pole sitter Mario Clouser kept Ballou at bay for the opening lap to lead by a half-car length at the line in the event co-sanctioned by the USAC Wholesale Batteries Midwest Wingless Racing Association. Ballou quickly put an end to the brief duel with a slide job on Clouser entering turn one moments later to take a firm grip of the race lead.

Promptly making mincemeat of the field, Ballou carved his way through traffic throughout the first 20 laps to build a commanding 2.5 second advantage with 12 laps in the book as Bacon surged through the field to slot himself into second past Clouser after starting back in the fifth spot.

From there on, the foible for Ballou was traffic as he cut in, around and between the tail end of the field while Bacon, the four-time series champ, snipped at the interval, dwindling it to within a couple of car lengths while Ballou became stymied behind the lapped car of series Rookie Alex Banales. Bacon pounced at the opportunity and slid past Ballou at the entrance to turn three. Bacon completed the pass as he swept from the bottom of turn three up to the top of four, jammed between Banales, who was positioned just ahead of his front bumper and Ballou on his rear bumper.

“He kind of got into it a little bit when he slid up and was backing up the racetrack,” Ballou recalled when he lost the lead to Bacon. “I could’ve spun him out but that’s just not the way we race.

Using Banales as a pseudo pick, Ballou dove below both Bacon and Banales entering turn one while Bacon remained pinned behind Banales. That allowed Ballou to seemingly say “sayonara” as he bolted off into the distance never to be headed again as he completed his parting shot with a 3.632 second margin of victory over Ballou, Justin Grant and C.J. Leary with first-time series Fatheadz Fast Qualifier Emerson Axsom rounding out the top-five.

“He was definitely slowed down in traffic and the line I was running was clear,” Bacon explained of his late-race challenge of Ballou. “So, I was able to catch him really fast and, as I caught him and got him, the grip on the line I was running just went away. I probably used up what I had when I tried to get by him, and he was able to get by me. After that, I was having more trouble with lapped cars, then he pulled away, so we just had to settle in. We gave it a shot and got in front of him once, but it wasn’t quite good enough. He set a pretty fast pace when he was up there by himself.”

Justin Grant (Ione, Calif.) recovered from his worst result of the USAC National Sprint Car season (10th) on Thursday night at Lakeside by finishing 3rd on Saturday at I-70. Grant and the team made wholesale changes in the time between the two events, and even had trouble with their semi-trailer en route to I-70. But all’s well ends well as Grant got back on track as the feature’s hardest charger, advancing from the 8th starting spot to take 3rd in his TOPP Motorsports/NOS Energy Drink – MPV Express – TOPP Industries – LA Poly/Maxim/Kistler Chevy.