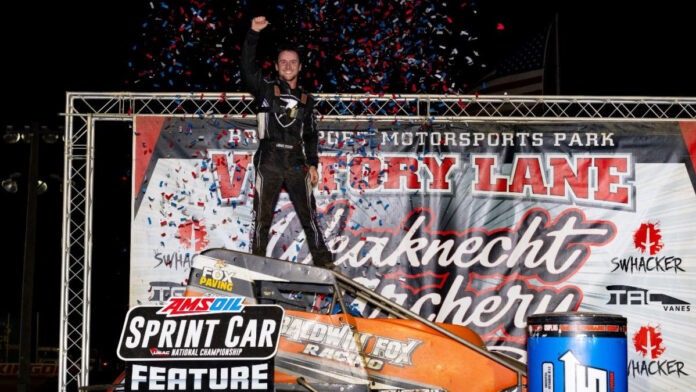 SWEDESBORO, NJ – In his five career USAC Eastern Storm feature starts coming into Wednesday night’s event at New Jersey’s Bridgeport Motorsports Park, Logan Seavey had yet to experience a finishing position in the top-half of the field.

The laundry list of Seavey’s results included a pair of 13th place finishes, a 14th and a 20th in 2021, followed by another 13th during Tuesday night’s Eastern Storm opener at Grandview Speedway, which was not indicative of his performance that saw him running as high as fourth late in the going before suffering a flat tire.

Seavey’s results were also certainly not representative of the type of run he could muster when everything aligns, from himself, the team, the setup and yes, even the aspect of luck.

All those attributes came together in simultaneous fashion on Wednesday night during round two of USAC Eastern Storm 2022 at Bridgeport, for this evening ultimately belonged to the driver of the Baldwin-Fox Racing/Fox Paving – AMSOIL/DRC/Claxton Chevy.

While Seavey remained in the hunt throughout, he quite nearly saved his best for last when he surged to the front late in the going, taking over the lead with a turn one slide job on Briggs Danner just three laps from the finish to score his first USAC AMSOIL Sprint Car National Championship feature win of the season.

Among the aforementioned results, Seavey’s Bridgeport resume was just as much of a puzzling puzzle with a 13th in both his USAC National Sprint Car and USAC National Midget appearances during the 2021 campaign. But on this night, he made it imperative to turn the beat around.

“I’ve kind of struggled here in the past in the sprint car and the midget,” Seavey acknowledged. “I’m just so proud of (crew chief) Ronnie Gardner. We’ve just been so fast every race. To come out to Pennsylvania where I’ve struggled, and to now get a win here is really cool.”

Seavey started fourth on the grid and witnessed trouble up ahead right from the get-go on the initial lap when outside front row starter, and early leader, Emerson Axsom slipped high in turn three and slapped the outside wall. Axsom instantly slowed to a crawl and, subsequently, after pulling into the work area, his crew found a brake line issue on the car that sidelined him for the rest of the 30-lap feature, resulting in a 22nd place result.

While Seavey was running solidly in second behind early leader Thomas Meseraull, his Baldwin-Fox Racing teammate Alex Banales found the outside wall to be just as solid, unfortunately, as he tagged the concrete perimeter between turns three and four and flipped over. The Lafayette, Ind. native was uninjured in the incident and finished 21st.

On the ensuing lap six restart, Danner cracked the whip and slid past Seavey on the entry into turn one for the second position as the USAC East Coast Sprint Car point leader put himself in prime position to challenge Meseraull in his drive for a first career series win.

Following Korbyn Hayslett (15th) and Charles Davis Jr.’s (16th) spin and stop in turn two on the 16th circuit, Danner utilized the resumption to make his bid to get out ahead of Meseraull for the lead in turn one, but Meseraull countered and drove past Danner in turn two, then slyly stole his line as he cut across Danner’s nose at the entry to turn three before, ultimately, ducking back in line as a swarm consisting of C.J. Leary, Seavey and more closed in.

“I fell back to third,” Seavey recalled. “I was a little bit better than T-Mez early but after a couple yellows, I don’t know what changed, but I didn’t really love how I was feeling when the track got slick. That restart about halfway through, I really just committed to pounding the fence in one and two because I couldn’t really cut the middle very good. My left rear tire grabbed some grip and it just cleaned up. I found a really good lane in one and two to gain some speed.”

The unforeseen became the standard down the stretch as heartbreak hit race leader Meseraull’s machine when he shockingly ran out of fuel at the start/finish line 11 laps from the finish. He’d return to the lineup at the tail of the running order and salvage an 8th place finish for the night.

Danner assumed his newfound position as the leader and, on the lap 20 restart, he stretched his advantage to nearly a full second over Leary as Leary contended with a challenge from both Seavey and Ballou who were on the move. Shortly thereafter, Seavey came to life as he slid by Leary for 2nd in turn three on lap 25 and clamped down to within a car length of Danner.

“The top didn’t really have a cushion, so you couldn’t really make a lot of speed early; that’s where I was giving up spots,” Seavey explained. “I was trying to get some momentum going early and I just kept getting slid on restarts. I felt like I was getting decent restarts, but it’s just so easy to slide people here. Luckily, it’s also easy to cross them over. I didn’t give up too much, and then we came on at the end when it mattered.”

With three to go, Seavey got right to the back bumper of Danner on the front straightaway, then slid by in turn one on lap 28 to take over at the front, completing the lap just before Jake Swanson (8th) performed a 360 degree spin in turn four to bring out the yellow.

Danner was out of line on the lap 29 restart attempt, which was called back. As a result, Danner was docked one spot from second to third, which moved him to 3rd behind Seavey and Stockon for the green flag and was promptly passed by Leary for the final spot on the podium as soon as action resumed.

A little bit further ahead, Seavey was up front and in control as he successfully completed the task over the next three laps and earned his accolades as a Bridgeport USAC Eastern Storm winner by 0.599 of a second over Stockon, Leary, Danner and Ballou.

Stockon (Fort Branch, Ind.) became the lone driver to finish on the podium in each of the first two nights of Eastern Storm. After taking 3rd the night before at Grandview Speedway, Stockon took a season-best 2nd place finish at Bridgeport in his KO Motorsports/Hutson John Deere – Superior Tank & Trailer – AMSOIL/Flea RC/Fisher Chevy. It’s his best result in a USAC National Sprint Car feature since winning at Indiana’s Tri-State Speedway in September of 2020.

**Alex Banales flipped on lap 5 of the feature.