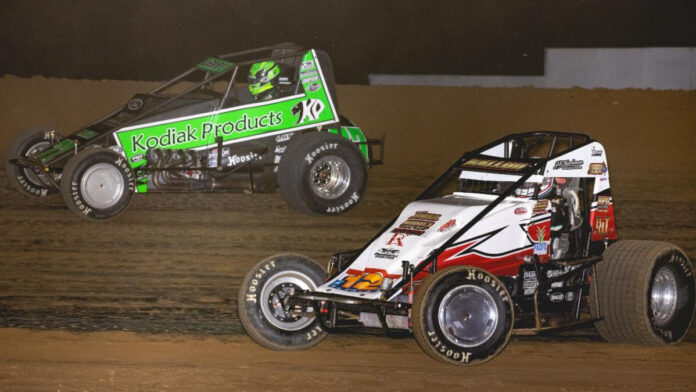 PUTNAMVILLE, IN – In order to become a winner, one cannot simply settle on merely being a follower. One must discover their own path, their own journey, to reach their desired destination.

Following a mid-race caution, the Greenfield, Ind. native made an in-car adjustment and a race-changing under the helmet adjustment, ultimately deciding on a new plan of attack which took him from the bottom of the 5/16-mile dirt oval to the top in the USAC AMSOIL Sprint Car National Championship and Midwest Sprint Car Series co-sanctioned event.

In quick succession on the lap 15 restart, Leary darted straight to the high line, first gliding around bottom feeding Kevin Thomas Jr. for second, then by race leader Robert Ballou on the 16th lap by mere inches at the line.

That made all the difference and set Leary forth to his second consecutive “Sprintacular” opener victory, repeating his triumphant performance from one year ago in his Michael Motorsports/Kodiak Products – Gray Auto – Highsmith Guns – DMI/DRC/Cressman Ford.

The midstream change and refusal to stand pat, paid off for Leary as he gained his second USAC National Sprint Car feature win of the season, which was also the 18th of his career, moving him past Jerry Coons Jr., Jim Hurtubise and Bud Kaeding for 33rd on the all-time list.

“I just went to the top there and started pounding the curb,” Leary recalled. “I never heard anyone up there when I was running second and third, but I felt like since there were no points for us tonight, I just needed to move around and try to win the race. I went up there and our car was really good and stable. It’s a lot of fun to come out and bang the curb; there’s only a handful of guys that can do it. It’s super technical.”

To clarify, there weren’t exactly “no points” available on this evening with 50 points being issued to all licensed USAC National Sprint Car drivers and entrants who signed in on this night regardless of finishing position. But the occasion afforded Leary the opportunity to throw caution to the wind, so to speak, in order to do what needed to be done for him to be standing in victory lane once more.

Leary began his journey from the third position in the 23-car field, and briefly fell back to fourth while pole sitter Kevin Thomas Jr. shot out to the early lead in what was his first USAC start of the season. Thomas looked like he hadn’t missed a beat until he snagged the turn four cushion on the first lap, which knocked his car askew and dropped him from first all the way back to fourth in no time flat.

That opened the door on the bottom for Leary who cruised the bottom past Chase Stockon, Robert Ballou and Thomas Jr. for the lead at the stripe. Leary’s grip of the top spot was short-lived as Ballou nosed underneath moments later in turn one, then edged away at the exit of turn two.

The running order remained unchanged with Ballou ringing the bottom while Leary ran a distant three seconds behind with Thomas reemerging to challenge Leary. On lap 12, Thomas played the limbo line to perfection, overtaking Leary in turns three and four to take over second.

By the time the yellow flag flew for 17th running Mitchel Moles’ spin and stop between turns three and four on lap 14, Ballou had ballooned his advantage to a full-straightaway, 4.071 second margin over Thomas while Leary rested a distant third. But now, Ballou’s lead was erased heading into the fateful restart which would ultimately tell the tale.

First, Leary disposed of Thomas on the initial lap of his high line excursion on lap 15. Now running second, Leary repeated the same verse and flew around Ballou to lead lap 16 at the line by the miniscule margin of 0.018 sec.

“Robert was really good on the bottom,” Leary acknowledged. “I don’t know if anybody had much for him around the bottom. I made some shock adjustments under that first yellow. I was a little bit better but still wasn’t good enough to beat him on the bottom. Then, I kind of went the other direction on the shocks.”

With the laps waning down to six to go, Leary continued to stretch his way out from Ballou to the tune of 1.3 seconds. With Ballou seeing his winning chances fade into oblivion, he briefly altered his line to the top. After the surging Brady Bacon nearly ripped away second from him, and seeing Leary up his lead to 2.25 sec., Ballou decided enough was enough and traveled back to the bottom to resecure the line.

Leary had everything well under his control up front down the stretch as he crossed the line for his second overall Bill Gardner Sprintacular feature victory by a 3.267 margin all while chaos was breaking loose behind him. One corner from the finish line, second running Ballou clipped the turn four infield tire with his left front, causing him to spin sideways. Caught up in the melee as an innocent bystander was third-place Thomas who plowed in and came to a halt as well.

With two-thirds of the podium knocked out in the blink of an eye, that elevated Bacon second and Kyle Cummins to third while Chase Stockon scored a fourth and Shane Cottle rounded out the top-five.

“Running on a big curb like that, that’s not really our bread and butter, but it’s encouraging that our car is capable of doing that,” Bacon stated. “I just didn’t get a very good start to the race, and I put myself in some bad spots. There were a couple of yellows that fell right after I passed cars, so we had to pass them again. No one was really sure if the top was going to come or not; C.J. was the first one to get up there and do it. We were kind of forced up there; we did okay but I definitely wasn’t as good as him.”

“I really feel like we had an unbelievable racecar,” Cummins praised. “My dad built this motor yesterday and we put it in today. This thing is a rocket ship. We put on new shocks, put new torsion bars in and Hank and Michelle Byram gave me a great car. Tim Spindler sets it up and my wife takes care of the baby the whole time and she’s a handful.”

The 58 cars on hand were the most for a USAC National Sprint Car event since the Western World Championships of 2008 at the defunct Manzanita Speedway in Phoenix, Ariz.