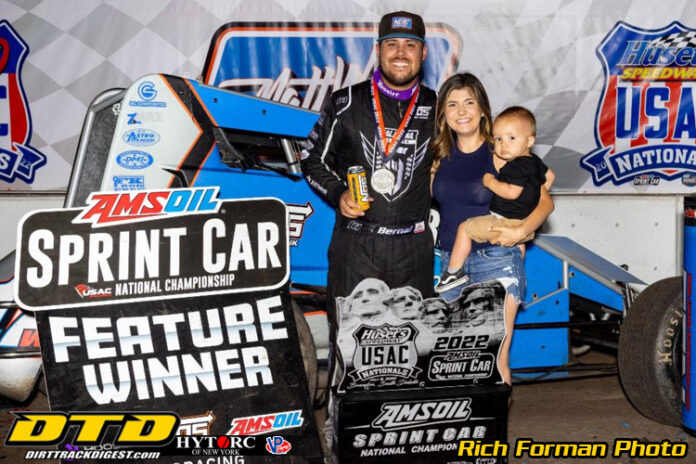 BRANDON, SD – Ryan Bernal had been waiting for this moment to come for more than a decade.

Following a disastrous late-race incident which eliminated the top-two drivers in the field from competition with 10 laps remaining, Bernal was thrust into the limelight and decided that, after 11 years, he wasn’t going to wait around any longer.

His 61 total USAC feature wins rank inside the top-25 all time, but without a USAC national win, his personal portfolio wasn’t quite as complete as he’d have liked to be. That special night finally arrived for Bernal as he took his Matt Wood Racing/Elk Grove Ford – NOS Energy Drink – FK Rod Ends/Spike/Stanton Chevy to the biggest racing moment of his career, a night he won’t soon forget.

“This is, by far, the greatest thing that’s happened to me in racing,” Bernal exclaimed. “It’s been such a long time coming. I’m just glad it finally happened. I hope you enjoyed that because that was the most special win of my career.”

The victory was sort of a surprise to Bernal, although his pedigree says otherwise, as he became the second first-time USAC National Sprint Car winner of the season, joining Emerson Axsom in that company while also providing the event’s promoter, Matt Wood, his first career USAC National Sprint Car victory as well. It was Wood’s first USAC national win as an entrant since Shane Golobic captured the 2016 National Midget opener at the Southern Illinois Center in Du Quoin.

“I’ve been trying for so damn long. You guys really don’t realize what this win means to me,” Bernal stated as he channeled Al Unser Jr. following his Indianapolis 500 victory in 1992. “We have no business being here; we really don’t. I’m a part-time racer who’s racing with a couple of wing guys, but Matt Wood gave us a great opportunity to come out here with great equipment.”

Bernal started fifth on the grid and hovered around the fifth and sixth spot for the first two-thirds of the event while outside front row starter Mitchel Moles had the field covered throughout the 30-lap feature. However, pole sitter Xavier Doney initially assumed control of the race, leading the first lap of his USAC National Sprint Car career on the opening circuit before Moles ripped around the outside to take over the top spot at the exit of turn four at the end of lap two.

Moles tore into the field as he opened up a convincing four-second advantage after slicing into the heart of lapped traffic. Fourth-starting Jadon Rogers attempted to keep pace with Moles as he cut through the narrow gap left open between the lapped car of Chad Frewaldt and Doney midway down the back straightaway to slot into the second position on lap 12.

Six laps later, 14th running Braydon Cromwell shredded a right rear tire right in front of race leader Moles on the back straight, forcing Moles to check up and dive to the inside to narrowly avoid catastrophe. It was the only sign of slowing up the USAC National Sprint Car Rookie displayed all race long while constructing a whopping 5.663 second lead before the lap 18 yellow.

At the time, three of the first four positions were held by drivers seeking their first career USAC National Sprint Car feature wins with Moles first, Rogers second and Doney fourth with only the previous night’s winner, Robert Ballou, intermingling himself with the young crop in the third spot. Notably absent from the list at the moment was Bernal who sat back in sixth.

Once the green flag redropped, Moles resumed his thorough waxing of the field and, with 10 to go, was already up 1.5 seconds over second-running Rogers and, as the class of the field, appeared well on his way to notching victory number one. Not so fast my friend.

On lap 21, the entire face of the event turned on a dime as Moles got into turn three over the edge of the cushion, then climbed the outside wall, sending him into a series of flips. As Moles bounced down the racetrack, second-running Rogers shot to the bottom, but became the innocent victim instead when his right rear tire just barely clipped Moles’ front bumper, sending Rogers into a dueling tumble alongside Moles.

Heavy damage to both cars prevented any sort of return for either driver, but both individuals walked away unscathed but heartbroken with the realization that a first USAC victory was not in the cards on this evening. However, for Bernal, it signaled new life.

“When the red came out, it was super unfortunate to see that happen,” Bernal observed. “But when that red came out and seeing that those guys were out, I looked at my guys in the infield and said, ‘this is ours.’”

Now running fourth on the restart, Bernal shot through the middle on the lap 21 restart to steal third from the bottom-running Grant, then cleared Bacon for second around the outside, beating him to the stripe by a foot before setting course for Ballou and the race lead.

Ballou jumped the turn four cushion with seven to go, allowing Bernal to zip by underneath. Ballou came right back at Bernal and slid back past him entering turn one moments later before Bernal countered back underneath to secure the spot while bringing Grant and Bacon along in tow to second and third, respectively, while Ballou fell to fourth.

Up front, it was all Bernal’s show for the remainder of the 30-lap frame around the 1/3-mile dirt oval as the veteran racer capped a topsy-turvy affair with a 1.576 margin of victory over Grant, Bacon, Ballou and Logan Seavey.

**Mitchel Moles & Jadon Rogers flipped on lap 21 of the feature.