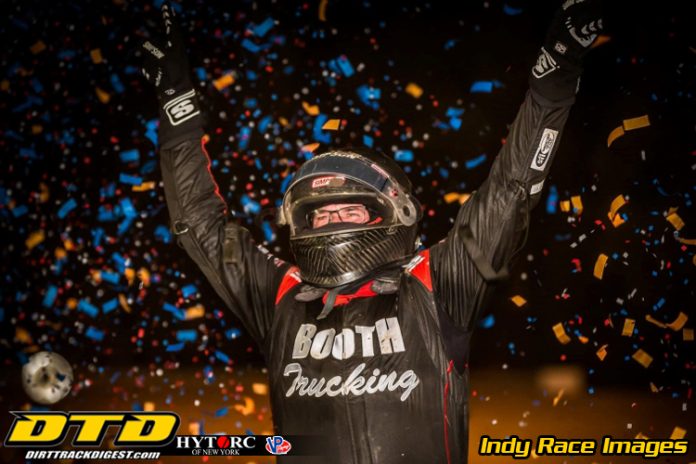 GAS CITY, IN – Shane Cottle certainly possesses a flair for the dramatics at Gas City I-69 Speedway.

Three years earlier, Cottle charged from the 18th starting position en route to victory. On this night, he got a bit of a head start, but not by much, rolling off from the 10th position, and started picking his way through the field one-by-one all the way down to the last drop.

Running second to leader Justin Grant on the green-white-checkered restart, Cottle utilized his patented maneuver on the low line to race past Grant for good, leading only a single lap in the process, but it just so happened to be the money lap.

Just how much is Cottle part of the racing fabric at Gas City? Of his nine career USAC national feature victories, six of them have come at Gas City – four sprint and two midget. And just like those instances, Cottle’s display on Friday night was quite reminiscent of his past five wins there, running a line that seems as if it was tailor-made just for him.

“I love running the bottom here,” exclaimed Cottle, the 2004 and 2009 Gas City sprint car track champion. “I’ve won a lot of races around here just like that.”

Furthermore, the 51-year-old Cottle joined an exclusive club with his triumph. He became the seventh driver over the age of 50 to win a USAC National Sprint Car main event, putting him in the same company as Bob Kinser (54), Terry Pletch (52), Dean Shirley (51), Hank Lower (51), Dave Darland (51) and Jack Hewitt (50).

While Cottle’s modus operandi at the start of the 30-lap feature was to carve his way into contention with precision from the outside of the fifth row, but far out ahead in the distance in the early going was pole sitter Robert Ballou who firmly established the point as he slid up in front of outside front row’s Grant in between turns one and two on the opening lap.

Ballou held serve throughout the majority of the first half as he took ownership of the bottom line while Grant attempted to diamond off the corners – high on entry and low on exit. On lap 14, the payoff finally came to Grant. Briefly. Grant beat Ballou to the bottom of turn three and held it down around the infield tires to beat Ballou to the stripe.

A tick of the watch later at the start/finish line, Ballou readjusted, then shot down to the bottom of one and slipped in front of Grant, which included in a meeting of the chrome horns with slight bumper-to-bumper contact between Ballou’s rear bumper and Grant’s front bumper, resulting in Ballou’s reestablishment of the lead a lap before the caution was signaled due to a cone lying in the middle of the front straightaway.

Upon the lap 16 resumption, Grant shadowed Ballou for a lap before resuming his diamond-studded pattern once more, and on this occasion, the move stuck, and Grant assumed control of the pace with just 14 laps remaining. Meanwhile, Ballou pushed wide and fell back to more than a second behind Grant, but that’s when the whole complexion of the clean and green event fell into another dimension.

With 11 laps to go, Ballou found himself in a heated dogfight between himself, Brady Bacon and C.J. Leary for the second position. In turn two, Leary initially lost ground when he monster-trucked the infield turn two tires, sending himself airborne before continuing onward behind Ballou and Bacon.

A lap later, Bacon edged ahead on the outside of Ballou midway down the back straightaway when, suddenly, the two drivers clipped wheels – Ballou’s right rear and Bacon’s left rear – which sent Bacon spiraling like a football and flipping four times before landing on all fours with his nose flush against the outside guardrail. Bacon was none-too-pleased by the circumstances, and power walked across the infield from turn three to turn one to confront Ballou and discuss things over, animatedly, as the standing room only crowd roared in the backdrop of the heated situation that was unfolding.

Things got feisty when racing resumed on the lap 21 restart when Grant, Ballou and the emerging Cottle stood tall, three-wide in turn three. In response, Cottle skated by Ballou on the bottom for second while Grant eked out to a five car length lead over the next couple of laps. Soon after, on lap 25, it was Leary’s turn to take the final step up to the podium as he clawed underneath Ballou to overtake the third position in turn one.

With Grant seemingly home free after racing under the white flag indication one lap to go, the battle raged on for third when, all of a sudden, carnage struck again. While racing to the white flag, Ballou and Leary collided at the exit of turn four, reminiscent of Ballou’s earlier incident with Bacon, with Leary receiving the worst end of the deal as he belted the outside guardrail along the front straightaway nose-first before flipping on his lid and spinning like a top on his head.

Leary popped out of his heavily damaged racecar and made a beeline to the opposite side of the track in turn three to do an impromptu meet-and-greet with Ballou, Kung Fu style, as it turned out. Leary took a run at Ballou and delivered a swift kick to Ballou who was still strapped in his racecar under the red flag condition. After falling on his back to the track’s surface in his first kick attempt, Leary delivered another blow to Ballou’s upper body with his left foot before being escorted away from the scene by USAC officials.

As it turned out, the physical fighting on the racetrack was merely a prelude for the fight that was just about to be displayed on the track. Right away, Cottle put it up front as he slid up in front of Grant on the bottom of turn one. Grant made a valiant comeback through the middle of turns three and four to edge Cottle at the line by a sliver. Delivering the same bill of goods as he did a lap earlier, Cottle put a clamp on the top spot when he bolted back underneath Grant for the lead in turn one on the “overtime” lap 31.

Following a hop, a skip and a jump down the back straightaway one final time, Cottle closed out yet another come-from-deep victory in his USAC career by a 0.265 second margin over Grant, Mitchel Moles, Ballou and Chase Stockon.

Without that final stoppage that arrived when Grant was one-third of the way through his final lap and on the path to certain victory, Cottle felt that chances were slim-to-nil for a miracle without the aid of what resulted following the Ballou and Leary altercation.

“I got to trying too hard,” Cottle acknowledged. “I missed my marks and Grant would get out on me, then I’d catch back up with him a little bit. But before that last red there, I didn’t have anything for Justin. But we made a couple adjustments and now, here we are.”

Justin Grant (Ione, Calif.) led half of the race and came just one lap shy of winning the USAC Indiana Sprint Week opening race for the second straight season. Instead, he settled for a close second, albeit in a performance in which he extended his USAC National Sprint Car point lead to a season-high 73 points in his TOPP Motorsports/NOS Energy Drink – MPV Express – TOPP Industries/Maxim/Kistler Chevy.

In what was one of the finest Indiana Sprint Week debuts in recent history, Mitchel Moles (Raisin City, Calif.) set fast time during Fatheadz Eyewear Qualifying, then raced to a third place finish in his Reinbold-Underwood Motorsports/AME Electrical – Mesilla Valley Transportation/Spike/Stanton Chevy.

“I’m not really good at these rough little bullrings,” Moles pointed out. “To run third here tonight, I feel like that’s pretty good. I just struggle running the bottom. Cottle went by me, and I could see how good he was running it. I wasn’t nearly that good, so I just stuck it on the fence and did what we know how to do. I ripped the curb and tried not to fall off turn two. Cottle, he’s like the man to beat here, and Grant’s pretty good everywhere, so if we can be near those guys, we’ll be all right this week.”