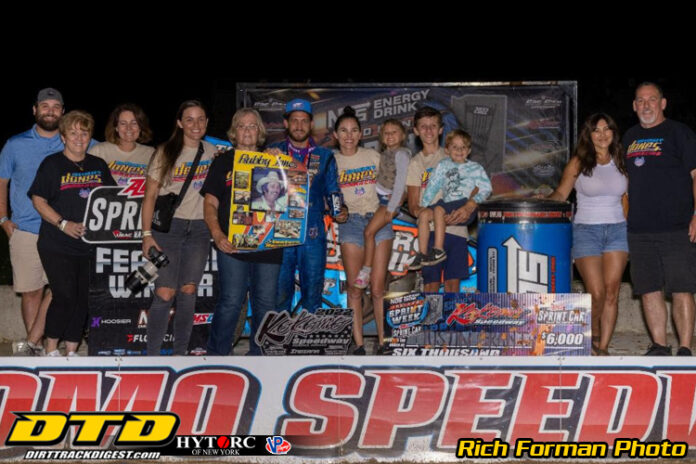 However, the Ione, Calif. driver belied that fact with three answers of his own amid his resurgence to the lead to prevail in a near racelong tug-of-war with Robert Ballou, then fended off a late burst from Kyle Cummins in the final laps to earn his first victory of Indiana Sprint Week 2022 following runner-up results in each of the first two features run to date.

The lap-after-lap barrage of lead changes resulted in seven swaps of the number one spot between Grant and Ballou in a riveting 12-lap span during the middle portion of the event.

The exchanging of the lead that many times within a 30-lap feature tied an all-time Indiana Sprint Week record for the most lead changes in a single feature event, equaling the mark of seven set during the rounds at Lincoln Park in 2001 and Bloomington in 2016.

The last hurrah of the evening’s continuous changing of the guard went Grant’s way on this night, leading the final nine laps to score an Indiana Sprint Week feature victory for the second consecutive season at Kokomo, the third driver to accomplish the feat following Jon Stanbrough in 2006-07 and Thomas Meseraull in 2017-18.

“Champ” is the title Grant has first and foremost on his mind as he extended his Indiana Sprint Week lead to 43 with four races remaining and his overall USAC National Sprint Car lead to a season-high 109.

This victory is also held in high regard by Grant as he became the first-two-time feature winner of the inaugural 10-race Bubby Jones Master of Going Faster series in his TOPP Motorsports/NOS Energy Drink – MPV Express – TOPP Industries/Maxim/Kistler Chevy, a series which honors the memory of his late father-in-law whose family was well-represented at Kokomo afterward, standing in unison with Grant in victory lane at a place that Grant has achieved several of his most spectacular moments.

“I love winning any race at Kokomo, let alone a Sprint Week show,” Grant exclaimed. “Everybody brings the intensity; Sprint Week at Kokomo is as cool as it gets. It’s a Bubby Jones Master of Going Faster race and those feel really good to win. All the Jones family is here, and all my in-laws are here running around. It feels good to win for them.”

Additionally, no driver has mastered Kokomo Speedway since its reconfiguration in 2005 more often than Grant who picked up his 25th career win on the 1/4-mile dirt oval, surpassing both Dave Darland and Jon Stanbrough for first all-time.

“That’s really, really special. Now I’m going to try to not cry up here and look like Kody Swanson,” Grant stated with a hearty laugh. “When I first moved to Indiana, I worked for (car owner) Jeff Walker and Kokomo was where we came every Sunday. I’d come up here and watch Dave Darland and Jon Stanbrough just wax guys night-in and night-out. To win one race at a track those guys have won at is really special, but to be the all-time winner, I don’t know if I have words for that.”

Grant began his race from the fourth starting spot while Ballou, from the outside of the front row, carried the initial advantage throughout the first one-third of the event after spurting around the outside of pole sitter Mitchel Moles to take the lead on the opening lap.

While Ballou jumped away to a full second advantage by lap seven, Grant was in the midst of prying underneath Moles to take over the second spot with a bottom-swiping move in turn four.

On lap nine, the now third-running Moles found trouble as he biked his way on entry of turn one, slammed the outside wall and 180’d his way to a stop, heavily damaging both the front and rear end of his ride, and putting him out of the race.

Grant dug deep on the bottom when the race resumed on lap nine and continuously edged closer to Ballou before finally clearing him for the lead off the bottom of turn four on lap 11. After a turn three spin by 12th running Jason McDougal, Ballou fired back on the lap 13 restart and missed Grant by a foot at the line on both the 14th and 15th laps, signaling the ignition of one of the finest duels ever witnessed at Kokomo.

Ballou’s persistence paid off as he enveloped the low line to bring him ahead to the lead by a scant 0.002 sec. margin over Grant at the line. Grant returned the favor by snagging the lead back for himself on lap 17 before Ballou see-sawed back to the front once more by the exact same 0.002 sec. margin he demonstrated just two laps earlier. That also proved to be short-lived for Ballou as Grant went topside to clear Ballou for the lead once more on lap 19.

Facetiously speaking, Grant was able to settle in for laps 19 and 20 as Ballou hung within a car length in arrears. On lap 21, Ballou answered the bell again as he edged ahead on the bottom to lead by a half car length at the stripe over Grant.

Grant, with no panic in his psyche, promptly kept his foot in it on top and found enough oomph to motor past Ballou with a car length to spare at the line on lap 22. Though Ballou kept close tabs during the ensuing laps, remaining within a car length, Grant denied Ballou’s bid to make another run at him for the win.

The Grant/Ballou cascade ended for good as the frontrunners entered lapped traffic on lap 25. Leader Grant separated himself from Ballou while Cummins flat drove around the outside of Ballou to garner second on lap 26.

Coming to the white flag, Cummins, like a blanket, basically covered Grant’s rear bumper in turn three. Cummins, however, stumbled atop the cushion, costing him an opportunity to make a move for the next half lap. Giving it one last go in turn three, Grant diamonded turns three and four, which successful ironclad Cummins at bay, as Grant completed his fifth career USAC National Sprint Car feature win at Kokomo by 0.155 sec. over Cummins, Ballou, C.J. Leary and Brady Bacon (from 13th).

Kyle Cummins (Princeton, Ind.) nearly ran down Grant for the win, coming just a tad over a car length short in his Rock Steady Racing/Ultimate Predator Boats – Mid-America Safety Solutions/Mach-1/Cummins Chevy. After an uncharacteristic crash the previous night at Circle City Raceway, the team switched engines overnight, but Cummins lamented the fact that he might have went to the top too early during the feature. Cummins wound up with a season-best second for his best run during Indiana Sprint Week at Kokomo since winning in 2016. His heat race performance from sixth to first, meanwhile, earned him the GSP Quality Driving Performance of the Night.

C.J. Leary (Greenfield, Ind.) obliterated Kokomo’s USAC National Sprint Car track record with a time of 12.284 seconds during Fatheadz Eyewear Qualifying. That broke the eight-year-old record of 12.405 held by Dave Darland since 2014. Leary’s eighth fast qualifying time of the USAC National Sprint Car season was also the 37th of his career, tying him with Larry Dickson for sixth all-time.

After his heat race flip in turn four, Jake Swanson was transported to an area hospital. His CT scan came back good with no broken bones. However, he did require a few stitches on his face.