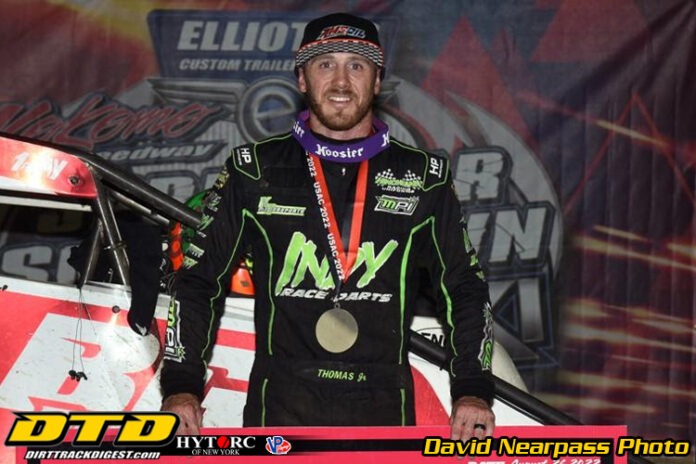 In one sense, the Cullman, Ala. racer captured the second round of Smackdown for the second consecutive year – last year’s running being held in the daytime – while this year’s was held under the lights.

On the other hand, the juxtaposition of KTJ’s Thursday night result compared to Friday’s was just as stark as the contrast between the sun and the moon itself.

Pulling to the infield with smoke pouring out from under the hood 24 hours earlier was replaced by a joyous relief in victory lane for Thomas and his BGE Dougherty Motorsports team for the first time in USAC competition aboard their Altoz – Schaeffer Oil – Hornbeck Concrete/DRC/1-Way Chevy.

An overnight engine change cured the ails for the team as Thomas raced to the lead around the outside of Jake Swanson on lap 11 and led the remainder of the 30-lap distance to score his first USAC AMSOIL Sprint Car National Championship triumph of the season in the unlikeliest of manners.

“I think I just ran 30 laps on the top,” a surprised Thomas interjected. “That was pretty fun; I hadn’t done that in a while.”

Winning never gets old, and Thomas embraces each one to the fullest. However, possibly none meant more to him at this juncture than this one, which proved to be a longtime coming for the driver who had only finished inside the top-ten once throughout his first eight USAC National Sprint Car feature starts this season.

“I was over losing so much; man, it feels good to be back,” Thomas sighed with an air of accomplishment. “For the past month, we’ve been contemplating when it was going to turn around. But these guys just don’t quit. I’m usually pretty persistent and I get a little ramped up but, man, I was down. I hadn’t been that down in a long time. Whether it was a winged car, a non-winged car, midget or a damn golf cart for all I care, it’s been frustrating.”

Over that two-month stretch, Thomas had seen his fair share of heartache and heartburn with a variety of twists and turns that had taken its mental toll, and had become jarringly wearing ever since the team/driver combination connected to start the summer months back in June.

“I’m so happy for these guys,” Thomas exclaimed. “We got a win during one of our first nights out at Haubstadt (with the Midwest Sprint Car Series). I’ve junked a car since then, hurt some engines, done some stupid stuff and flipped in qualifying. I’ve done everything except be spectacular for these guys. There have been a lot of downs, but tonight, we finally got an up.”

Thomas started third in the field of 22, while outside front row starter Swanson jetted out to the opening lap lead as pole sitter Emerson Axsom and Thomas swarmed side-by-side amid a tussle for the second position.

After 15th running Chase Stockon slowed to a stop on lap nine, Swanson reignited the torch to pick up the lead right from where he left off. Thomas, however, tracked him down and made a beeline for the bottom in turn three on lap nine, only to witness Swanson rebuff by driving right back by while holding a car length advantage at the stripe. Thomas reloaded on the high line and rode the momentum around Swanson a lap later on the back straightaway to secure the position.

Just a short clip later, the surging Kyle Cummins, who had earlier picked up Fatheadz Fast Qualifying honors for the second consecutive night, snagged the outside retaining wall in turn two with his right rear tire as he chased the rear bumper of Swanson. The chance meeting of rubber to concrete for Cummins allowed C.J. Leary to slip under for the third position.

In the meantime, Thomas gained ample separation from Swanson with the aid of two lapped cars (Dave Darland and Anton Hernandez) occupying the space between with a 0.890 difference among the two front runners being the margin on lap 23 when past Smackdown prelim winners Thomas Meseraull (11th) and Logan Seavey (12th) tangled in turn two, resulting in a caution.

The incident served as no deterrent for Thomas who immediately reestablished control on the restart with eight laps to go, refocused with a clear vision of the cushion, and remained unbothered by any sense of a challenge as he put the clamp on his long-awaited return to USAC victory lane by 0.774 second margin over Swanson, Leary, Cummins and Axsom.

Exactly one month ago to the day, Jake Swanson (Anaheim, Calif.) was laid up in a hospital bed following a vicious crash at the very same Kokomo quarter-mile dirt oval. One month later, to the day, he turned in his best USAC National Sprint Car performance at Kokomo with a runner-up finish in his Team AZ Racing/Stratis Construction – Lucas Oil – RSS Industries/DRC/Claxton Chevy.

“I’m just absolutely stoked to be able to come back like that,” Swanson shared. “To be racing so soon is awesome and I wish, if I had some more laps, I would’ve known to move up there a little bit sooner. I could tell the bottom was wearing out and the top was probably where the race ended up. Maybe I should’ve gone up and tried it, but I was worried it was going to leave the door open.”

The top-eight drivers in combined points from Thursday and Friday’s programs locked themselves into Saturday night’s three-lap King of the Hill races featuring two cars going head-to-head in a bracket style tourney, with the winner advancing each time, will go on to determine the top-eight starting positions for that night’s feature event, with the winner of all three rounds securing the pole position for Saturday night’s 40-lap main event.