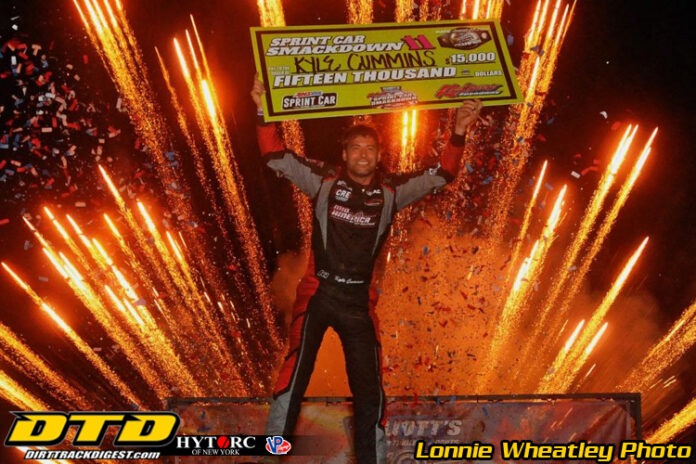 KOKOMO, IN – For the past 10 years, the term “Smackdown” served as a noun that was utilized to refer to the annual three-race weekend held in the month of August at Indiana’s Kokomo Speedway.

On Saturday night, Kyle Cummins fully demonstrated “Smackdown” as a verb, crushing the field in a 40-lap romp that rewarded him with a total prize of $35,000 for a night’s worth of work in winning the Elliott’s Custom Trailers & Carts Smackdown XI main event.

Starting from the outside of the front row, the Princeton, Ind. native punched out to a substantial lead that continuously grew throughout the duration, ultimately cruising underneath flagman Tom Hansing’s checkered more than four seconds ahead of the competition on the quarter-mile dirt oval in his Rock Steady Racing/Ultimate Predator Boats – Mid-America Safety Solutions/Mach-1/Stanton Chevy.

After multiple runner-up finishes on the final night of Smackdown in 2019-20 and a pair of preliminary night victories in his career, at long last, Cummins had finally grabbed the brass ring and the victory belt as a first-time Smackdown champion.

“This is by far the biggest win of my career,” Cummins exclaimed. “We finally got one of these. I didn’t know if I ever would. Now I can strike that off the list and I won’t have to endure that pressure again.”

Cummins led the race from start to finish after earlier being defeated his front row nemesis, C.J. Leary, in the final round of King of the Hill – a series of two-car, three-lap, head-to-head dashes to determine the pole. That was very nearly the least of his worries when, during his first round matchup, Cummins nearly bit it as he biked at the entry to turn three but saved it and continued on to survive and advance in the tournament.

“I about dumped it during King of the Hill and all I was thinking was, “Hank’s going to kill me,” Cummins explained, referring to his car owner, Hank Byram. “I was really uncomfortable in hot laps and (in King of the Hill). We just put some fresh bars on it, just thinking maybe one was dead, and it was a completely different racecar again.”

Cummins more than made up for his prior transgressions in a main event that saw the final 39 laps go uninterrupted without a yellow or red. The base $15,000 winner’s share was supplemented by a bevy of sponsors for each of the 40 laps at $500 bucks a clip, adding an extra $20,000 to the festivities.

Pulling no punches and leaving nothing to chance, Cummins bagged all of the bonus money while becoming the fourth driver to lead all 40 laps of the Smackdown A-Main along with Dave Darland (2013), Justin Grant (2018) and Tyler Courtney (2019).

There was no question that Cummins had his mind on the money and the money on his mind from the word “go.” That provided him with double the objective to get to the front of the field early and remain there as often as possible.

“Literally, on the first lap, I was like, ‘500,’ Cummins admitted. “I was thinking, how many more can I lead? On that red (flag), I was thinking I might get in my head here and fall back.”

A flip by 23rd running Brandon Mattox after he dug in and barrel rolled in turn one on lap two proved to be the only stoppage of the feature. Mattox walked away under his own power, but the car was towed away on the hook.

Just prior to the halfway mark, Cummins had elevated his lead to a full-straightaway, and by the time there were but 10 laps remaining, his lead had ballooned to over four seconds with the top-three of Cummins, Leary and Jake Swanson separated by a half-lap all with Cummins maneuvering high, middle and low to work his way through traffic.

“A couple times, just the way that the car was coming out of the corner, it just forced me down there,” Cummins recalled. “Instead of blowing the corner, I just went for it. There were a couple laps where I didn’t hit the top good enough and a lapped car pulled away from me. I saw someone to the inside of me and I thought that was second place, so I thought, ‘okay, the bottom’s got to be where it’s at.’ I moved around back and forth, and it seemed like anywhere I went, the car was great.”

Meanwhile, Brady Bacon had draped himself all over the tail tank of Swanson for the third position before swinging low past the high-riding Swanson in wheels-up fashion down the front straightaway to secure the position at the stripe with four laps to go.

With Thursday’s 22nd to 2nd theatrics and Friday’s unsatisfying and unfulfilled result, Cummins displayed straight, pure, 100% dominance on Saturday as he finished off a masterpiece performance with a substantial 4.088 second margin of victory over Leary, Bacon and Jake Swanson with Robert Ballou rounding out the top-five.

“I thought we had a great thing Thursday, then Friday, with the way the track was, we had a third or fourth place car and I couldn’t get anything done,” Cummins recapped. “I was kind of bummed out going into tonight, and then I just put my faith in these guys to make some changes and get thing comfortable again. The first night and a half, it was on kill. Tonight, the car was unbelievable.”

Cummins’ second series triumph of the season was the 12th of his USAC National Sprint Car career, equaling him with Eric Gordon for 12th on the all-time feature win list.

“I was hoping for a late caution because I felt like our car was getting better,” Leary pined. “At the start of the race, the thing was so tight; it was wheels up and the left rear was up. After King of the Hill, we made some small adjustments, but we put a full load of fuel in it, and we weren’t in drag race mode anymore. We just have to keep putting those notes in the notebook and just get better for next time. We really want to win this thing.”

Brady Bacon (Broken Arrow, Okla.) made a fantastic surge from eighth to third to round out the podium in his Dynamics, Inc./Fatheadz Eyewear – Cressman Sanitation – DriveWFX – Tel-Star/Triple X/Rider Chevy. Wildly, it marked his best career finish on the final night of Smackdown and he now possesses six top-five finishes in 10 Smackdown finale starts.

“I’m pretty pleased with how good our car was,” Bacon praised. “We passed a lot of good cars to get to third, but there was just too much real estate to make up without a caution there at the end. We usually kind of struggle on the last night here, but this year the role was kind of reversed. I wish we could’ve had a caution to see what we had but Kyle was going to be pretty tough to beat regardless.”

From across the shore and into his first USAC National Sprint Car feature start in three seasons, Banbury, Oxfordshire, United Kingdom’s Tom Harris raced from eighth to fourth in the semi-feature to earn the GSP North America Quality Driving Performance of the Night and his first berth into a Smackdown final night feature lineup.

With 26 positions advanced over the course of the mains throughout the three nights of Smackdown, reigning USAC East Coast Sprint Car champion Alex Bright (Collegeville, Pa.) was rewarded with the ProSource Passing Master award for the weekend.