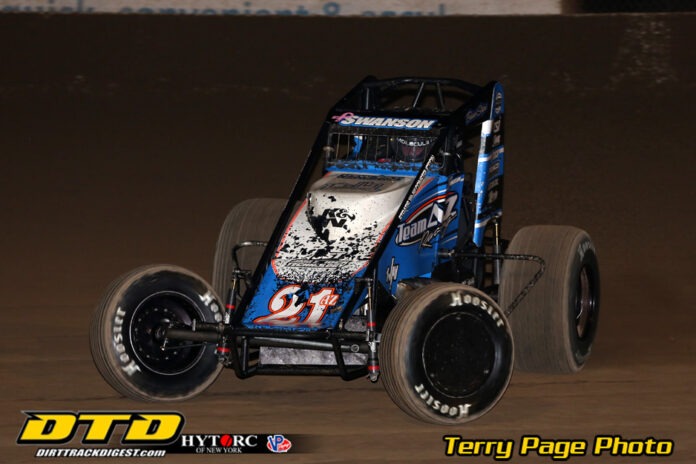 But one night following a second-place qualifying run and a runner-up finish in the feature, Jake Swanson made certain that he was “the one” in all aspects during Saturday night’s 55th Annual Chapman Chevrolet of Yuma Western World Championships Presented by Yuma Insurance & Avanti.

One couldn’t help but wonder if it was a harbinger of things to come when the Anaheim, Calif. native kicked open the door at the forefront of Saturday’s program at Arizona’s Cocopah Speedway by setting a new track record during Fatheadz Eyewear Qualifying.

As it soon became abundantly clear, Swanson’s evening was just getting started.

Swanson turned up the wick with a last turn, last lap pass to win his heat race after starting sixth, then followed through by once again charging from sixth to first in the feature, overtaking Robert Ballou for the lead with 13 laps remaining in the 30-lapper to score a complete sweep of the night in his Team AZ Racing/Stratis Construction – Lucas Oil – RSS Industries/DRC/Claxton Chevy.

The complete dominance displayed by Swanson in all phases – from qualifying to his heat race and to the feature – was the first such sweep in USAC AMSOIL Sprint Car National Championship competition since Tyler Courtney did so during the 4-Crown Nationals at Ohio’s Eldora Speedway in September of 2019.

To boot, the second USAC National Sprint Car victory of Swanson’s career was his most lucrative thus far with a $10,000 payday and, by doing so, he came through by delivering a dream come true for the Arizona-based Team AZ operation, which finally achieved one of its prized aspirations – winning in their home state at the Western World.

It’s a long way from the sort of season that Swanson described as “chaos” at certain points this summer due to injury, bad luck and misfortune running roughshod over the team in USAC competition during 2022.

“It’s just been non-stop work and there’s been no time for any sort of relaxation. I’ve got a little cold and it turned into a weeklong thing because I couldn’t ever just rest,” Swanson explained. “I’m just thankful for the opportunity to be able to do this. It’s been such a blessing moving to the Midwest (to race more often and for a living) and I didn’t really think I’d ever get the chance. I felt like I was too old. I didn’t really think it was going to happen but then COVID came, and it was one of those decisions where we jumped on it, went all-in and just hoped it would pan out.”

Not only was it a winning performance for Swanson, but it was also a riveting dissection of the 24-car field which witnessed him make all the right moves at all the right times throughout the non-stop, caution-free affair which presented Swanson with his second new track record of the night, this one for the distance of 30 laps.

“My job is so easy when I have such a fast racecar; holy cow,” Swanson exclaimed. “This thing has just been on rails. I was rolling out there starting six and I’m like, man, I’ve got some good guys up here in front of us. I still felt like, as long as I do my job, this car can win the race. I’ve just got to make it happen.”

While Swanson had an eagle eye view of the front of the pack proceedings from his outside row three starting position of the USAC National and USAC CRA co-sanctioned event, pole sitter Ballou stepped away to the early race lead while, in between Ballou and Swanson, a bit of high speed, close-quarters jockeying was at full intensity right from the get-go.

As C.J. Leary darted down the back straightaway right up against the outside wall, the squeeze play was on as Damion Gardner refused Leary access to have free reign to the fourth spot. The ensuing moment put Leary in the pinch position as he bounced his right rear tire off the concrete and lost quite a bit of ground. Leary caught up to Gardner in turn four and the resulting bumper-to-bumper contact sent Gardner slashing sideways across traffic all while retaining his position as Leary slid back to eighth.

Ballou maintained his steady presence on the bottom line for the first third of the race while Friday night winner Emerson Axsom stepped up to the top with a resurgent Leary and Swanson right in tow. However, Swanson was quickly gaining a full head of steam and slid under Leary in turn three to grab the third spot on lap 10.

Swanson soon made a bid for second as he peeked under Axsom for second in turn three on the very next lap before falling back into line and reloading. Swanson utilized his ammo to ultimately breeze past Axsom for second, then completed the pass exiting turn four on lap 13.

Riding the rim like the hero of a paperback novel, Swanson challenged Ballou to an all-out duel just after the midway point with the pair of native Californians riding two-wide down the back straight on the 18th circuit. Digging in, Swanson put the hammer to the nail and rode the wave around the outside of Ballou to complete the pass, and his quest for the lead, off turn four.

“I was worried about the racetrack kind of getting single file and I wanted to get to the lead as soon as I could and make sure I had track position when I needed it,” Swanson noted. “I don’t think it would’ve mattered, though. We still would’ve been able to drive to the front.”

Meanwhile, moments later, Ballou became the one who got burned in a three-way script. Enter number two, which was Leary, who flew around the outside to gain second from Ballou on lap 21, then reeled in Swanson in a hurry and was now within a handful of car lengths outside the lead as the frontrunners work heavy traffic.

Just when Leary seemed poised to strike on lap 24, he tagged the turn two wall in his pursuit of Swanson to reach the head of the class. That caused Leary to lose a substantial enough amount of ground to prevent him from formulating another attack, although he reloaded and was poised to return.

Leary lured his way back into the race for the lead on the final lap and was a mere single car length behind Swanson in turn two when Leary drifted over the top of the cushion, unceremoniously ending his one last chance to take a shot at Swanson.

Though two-wide traffic loomed ahead for Swanson in turns three and four on the final go-around, he was able to navigate swiftly and decisively to clean sail his way into the books as a Western World champion with Leary .816 of a second behind in the runner-up spot. Axsom nipped Ballou at the line for third by a nose with Ballou fourth in the order and Brady Bacon fifth.

Leary (Greenfield, Ind.) overcame an adventurous first lap in which he free-fell from fourth to eighth. He then gathered it up to advance all the way back to a second place result in his Michael Motorsports/Kodiak Products – Gray Auto – Highsmith Guns – DMI/DRC/1-Way Chevy.

“On the start there, I gave up some ground and I had a run-in with the 1 car,” Leary recalled. “We were so good at the end there and I was going to race Jake really hard. I was hoping to get a run at him in lapped traffic but, overall, it was a good weekend.”

A successful first Western World is in the books for Axsom (Franklin, Ind.). A night after winning the Western World opener, he raced by Ballou on the final lap to take third by inches at the finish line. It’s Axsom’s first run of back-to-back podium finishes since February of this season aboard his Clauson Marshall Newman Racing/Driven2SaveLives – ZMax Race Products/Spike/Kistler Chevy.

“Once you find a good package for something, you just stick to it and fine-tune,” Axsom said of the blueprint for CMNR’s success throughout the weekend. “I felt like, at the end, we were really coming alive to get Robert at the line. I think it was getting a little abrasive in turn one and, if there was a little bit more time, maybe we would’ve had a shot.”

Logan Seavey (Sutter, Calif.), meanwhile, pocketed up more than $1,100 in bonus bucks for his hard-charging performances during Western World weekend. Seavey passed 26 total cars across both nights to earn the Western World ProSource Passing Master Award. Furthermore, Seavey’s run from 21st to 6th in Saturday’s feature race earned him the coveted Lafond Jar of Change, which made up more than $900 of Seavey’s bonuses courtesy of fan donations.