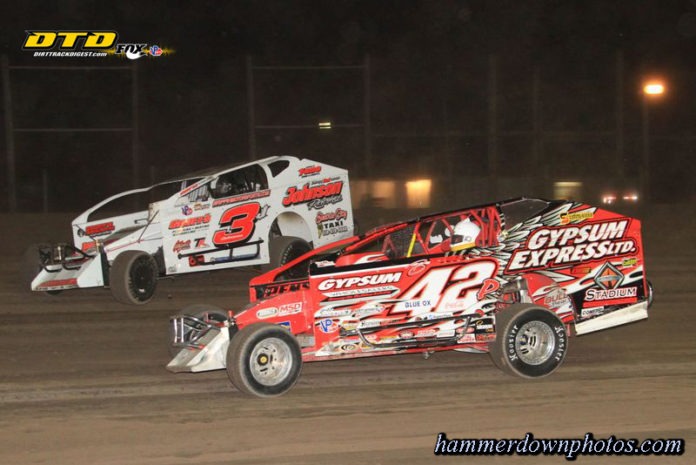 VERNON, NY – After a 2016 season that saw Mother Nature take her toll on the Utica-Rome Speedway, owners Bill and Kim Shea are ready for a fresh start in 2017. The schedule for the speedway is jam packed with some new events as well as old as the track looks to diversify its offerings to reach a wider variety of race fans.

New for 2017 is the Chill Factor 40 for the Gates-Cole Auto Insurance DIRTcar Modifieds scheduled for April 2. This is one of the first events, if not the first, scheduled in New York for the Modified and 602 Sportsman divisions. The 40-lap feature offers a $3,000 to win purse with $300 going to drivers who qualify. Also on the docket that day is the DIRTcar 602 Sportsman. Their 30-lap feature is set to pay $1,000 to win with $100 reserved for any drivers that qualifies. Drivers from other divisions are welcome to attend with several open practice sessions scheduled throughout the day for them regardless of division. The nightcap for the race is the only appearance in 2017 by Kings Smash’em Crash’em Demolition Derby.

After the Chill Factor the speedway goes silent for two weeks before returning for the traditional season opener for the Gates-Cole Auto Insurance DIRTcar Modifieds, DIRTcar Sportsman and DIRTcar Pro Stocks on April 23. This year these divisions are joined by the Gladiator Twin 20’s for the 360 Sprint Cars. For first time at Utica-Rome, Sprint Car teams have the chance to compete in a pair of $1,500 to win 20-lap features. Rules and qualifying procedures for the event will be announced in the coming weeks. This visit by the 360 Sprint Cars is the first of many as Lucas Oil Empire Super Sprints return for their traditional dates on Memorial Day, July 4th and Labor Day weekends while the 360 Sprint Car open Cole Cup is set for October.

It was already announced over a month ago that the track is returning to the DIRTcar fold for weekly sanctioning. The opening round of points for the DIRTcar divisions begins on the April 23 date. When the announcement came it was revealed that the Super DIRTcar Series returns on July 2 for the New Yorker 100. Joining the Super DIRTcar Series big-block Modifieds are series events for the DIRTcar 358-Modifieds, DIRTcar Sportsman tour and DIRTcar Pro Stocks. Utica-Rome Speedway kicks off Super DIRT Week XLVI with the DIRTcar 358-Modified Series on Tuesday night October 3. They’ll be joined by the Cole Cup for the 360 Sprint Cars as well as the 602 Sportsman division making it the only other time Sprint Cars are on the schedule during Super DIRT Week besides the World of Outlaws. The DIRTcar Sportsman and Pro Stock tours roll into town early in the season on April 30.


The Ultimate Sportsman Showdown is scheduled for July 23. Although the final details of the entire program are still being the finalized, the race is going to be worth $5,000 for the winner with $400 being reserved for feature starters. The race will be the highest Sportsman paying race in the history of the Utica-Rome Speedway. Everything is being finalized and will be released in the future.

Other touring series making visits to Utica-Rome in 2017 are the Go Nuclear Late Models on June 4 and the Capital Region Sprint Series which makes its only appearance on June 18.

The Rookie Sportsman division has joined the schedule on a semi-regular basis. They have 10 events slated for the 2017 season. Driver eligibility will be similar to other speedways in the area with only those with limited experience allowed to compete in the division.

If fans want the opportunity to take laps at the speedway the Kenny Wallace Driving Experience has two dates. On May 13 or August 12 fans can get behind the wheel any number of race cars and hit the half-mile to get the feel what our drivers experience week in and week out.

New for 2017 is the addition of Motocross racing to Utica-Rome. A course has been built behind the upper pit area off of turns one and two. Racing is set for the off-road course on June 11 (no circle track racing), September 17 and October 15. The track is still working out practice dates which will occur throughout the summer.

The popular truck pulling event returns to the track on August 25th for a second consecutive year. The track is hoping to secure a date to host a tractor pull as well. At this point no date has been finalized.

A kart track is in the stages of being built in the infield with completion expected come spring. A complete schedule of events for the kart track will be announced at a later date.

Several sponsorship opportunities are available for 2017 season, those interested should contact the speedway and see how Utica-Rome Speedway can help you market your business. For more information, call (315) 829-4557 or visit www.uticaromespeedway.com.