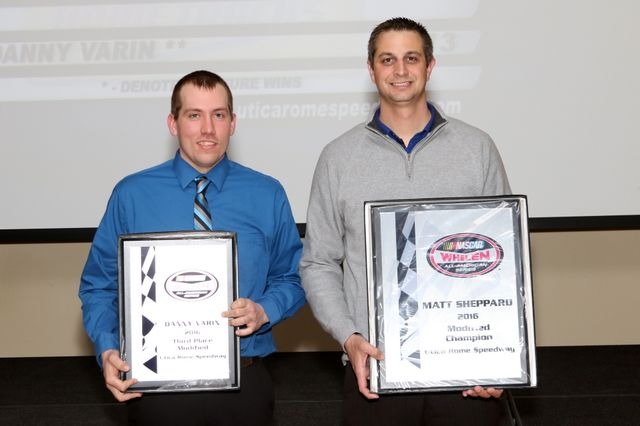 VERNON, NY- On Saturday, March 11, the Utica-Rome Speedway held its annual Awards Banquet and honored its top drivers for the 2016 season in front of a crowd of nearly 200 patrons at the Vernon Downs Hotel in Vernon, NY. Matt Sheppard received top accolades in the Gates-Cole Insurance Modifieds as he captured his second consecutive title and third overall while Matt Janczuk was the SUNY Canton 602 Sportsman champion. Steve Way was Broedel Energy Open Sportsman title winner for the second year in a row with Pete Stefanski securing his first ever G&I Homes of Vernon Pro Stock championship.

After splitting with his previous car owner during the 2015 off season, Matt Sheppard teamed up with Tom and Roxann Cullen in 2016 and never missed a beat. Winning on opening night and carrying that momentum throughout the season to win six events, including two Ferris Mower Race of Champions events plus the lone Super DIRTcar Series race in July, Sheppard took home another title in a season often marred by rainouts. Larry Wight kept the point battle interesting for much of the season, but the two-time feature winner had to settle for second in the season long point battle. Another two-time feature winner, Danny Varin, was honored for third place point finish while one-time victor Pat Ward and two-time race winner Rob Bellinger rounded out the top five. Marc Johnson, Vic Coffey, Mike Mahaney, Alan Johnson, and Matt Hulsizer filled out the remaining top 10 positions.

In what ended up being the final full season for the Broedel Energy Open Sportsman division at the Vernon oval, Steve Way fought his way to go down as the final track champion in class. Way used consistency as he only saw victory lane once in 2016 to collect his second consecutive title. Claude Hutchings, Jr. (four wins), Jack Miller (one win), Randy Shantel (one win), Jeremy Vunk (2 wins), Mark Effner, Heath Carney, Tom Tophoven, Craig Pope, and Lucas Heintz were also honored for their season long commitment.

Pete Stefanski made the weekly six-hour round trip from Western New York pay off as he survived a furious battle with runner-up Mike Welch and third place point earner Luke Horning as he took center stage as the 2016 G&I Homes of Vernon Pro Stock champion. Stefanski, Welch, and Horning all scored three wins during the season as they battled for the title right up to the final night. Single feature winner Jim Normoyle and Chris Carr took home honors as the fourth and fifth point earners while Bill Knapp, Gus Hollner, Frank Hyatt, Jerry Streeter, and Nick Stone (one win) rounded out the top 10.


After the top 10 in each division were honored, the attendees were shown a quick video clip from NASCAR top executives honoring all the racers for their accomplishments during the 2016 season. The top three in each division were then called back up to the stage to receive their NASCAR Whelen All-American Series plaque for being the top point earners in their respective divisions.

AJ Miller was the next honoree as he was the University of Northwestern Ohio(UNOH) Youth Achievement Award.

Davidson Auto Kids Club organizer Dave Kingwater took the stage to explain the importance of the Kids Club and point out several drivers who made special efforts to enhance the children’s experience at the speedway. Kingwater also presented a special collage of photographs taken throughout the season of kids enjoying their race night activities to Davidson Auto. Charles Tibbitts of Charles Tibbitts Masonry then joined Kingwater to present some special awards to competitors in all the weekly divisions. Marc Johnson was given the Newcomer Award in the Gates-Cole Insurance Modifieds while SUNY Canton 602 Sportsman drivers Charlie Tibbitts and David Schilling were awarded the Rookie of the Year and Newcomer award, respectively. Broedel Energy Open Sportsman driver Mark Effner received the Newcomer award while Rookie of the Year Aaron Page and Newcomer Nick Stone took home their awards in the G&I Homes of Vernon Pro Stocks.

Track owner and promoter Bill Shea then closed out the evening by thanking everyone for their continued support throughout the rain plagued 2016 season and described some of exciting events coming up in 2017. He talked about his plans to make the Utica-Rome Speedway a multi-use facility with the addition of a motocross track and a go kart track. He then announced plans for a huge 602 Sportsman event scheduled for July 23 which will pay $5,000 to win and will pay throughout the field, including any B, C, and D mains that are run. He also discussed the transition from NASCAR to joining the DIRTcar fold which was well received.

Utica-Rome Speedway would like to thank Gates-Cole Insurance, SUNY Canton, Broedel Energy, and G&I Homes of Vernon for their support by being the title sponsors of our weekly divisions plus the support of all our weekly sponsors. Without the help of our sponsors, we couldn’t do what we do on a weekly basis.

Utica-Rome Speedway’s 2017 season is set to open on Sunday April 2 with the first ever Chill Factor 40 that will feature a 40 lap $3,000 to win feature for the Gates-Cole Insurance Modifieds plus a $1,000 to win main event for the Broedel Energy DIRTcar Sportsman. A King’s Smash’em and Crash’em Demolition Derby and open practice for all other divisions is also planned as part of the opening day event. For more information on this event as well as the rest of the 2017 season, visit the official speedway website at www.uticaromespeedway.com or call the office at (315)829-4557. You can also like our Facebook page or follow us on Twitter to receive any updates.