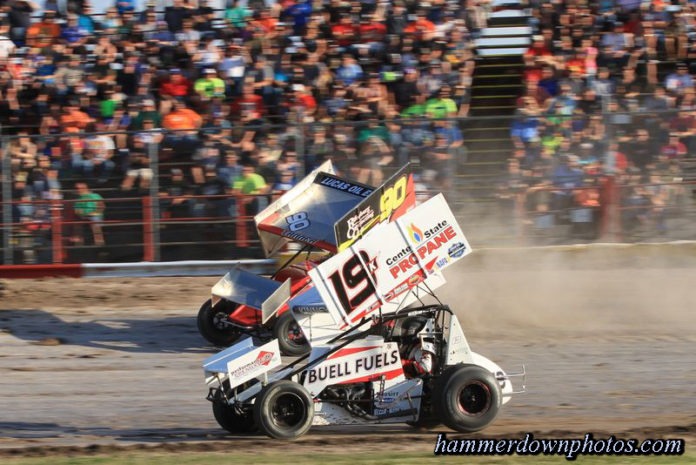 VERNON, NY- It has been seemingly a long offseason since the final checkered flag ended the 2016 season back on October 4, but that will come to an end this coming Sunday, April 23, when Budweiser presents the 56th Season Opener. A huge night is planned with the first ever running of the Gladiator Twin 20’s for the 360 Sprints plus the Gates-Cole Auto Insurance Modifieds, Broedel Energy Crate Sportsman, and Pro Stocks. This Sunday will also be the first event since Utica-Rome Speedway has returned to the DIRTcar ranks.

Always exciting when they visit the half mile oval that is the Utica-Rome Speedway, the 360 Sprints will compete in the inaugural Gladiator which will be two 20 lap features that will pay $1,500 to win each. At the completion of the two complete programs, the overall point gainer will be named the first ever “Gladiator” and take home the overall Gladiator trophy. A competitive field is expected that should include Cole Cup winner Mark Smith, Super DIRT Week special winner Lucas Wolfe, Chuck Hebing, Kelly Hebing, Billy VanInwegan, Danny Varin, Bobby Varin, Coleman Gulick, Matt Tanner, Dan Douville, Paul Kinney, Cory Sparks, Pete Richardson, Chad Miller, James Hanson, Parker Evans, Jason Barney, Matt Billings, Dave Axton, and more. URC champion Davie Franek has also expressed interest in attending, depending on how the rest of his weekend goes. All 360 Sprint competitors will have the opportunity to pay a $20 Gladiator Challenge fee when they draw for heat race position. All the money raised will go to the highest overall point earner for the two 20 lap main events, as long as they paid the Gladiator Challenge fee. Cole Cup rules will be used for this event.

Matt Sheppard will be looking to collect another Gates-Cole Auto Insurance Modified title, his third consecutive and fourth overall, this season and hopes to use the opener to launch his title defense. Last season, Sheppard had to hold off Larry Wight, Danny Varin, Pat Ward, Rob Bellinger, Marc Johnson, Vic Coffey, Mike Mahaney, Alan Johnson, Matt Hulsizer, and more for the title and many of these drivers are expected to return with title aspirations of their own. Several new faces are expected as well with the return of DIRTcar as well as several of the Open Sportsman competitors that are making the move up. Multi-time Super DIRTcar Series champion and Super DIRT Week winner Billy Decker will compete in the opener as well with the potent Mike Payne owned ride according the Mike Payne Racing Facebook page.

Since being included into the weekly lineup at Utica-Rome Speedway in 2015, the Broedel Energy Crate Sportsman has been super competitive every week, even though 2015 champion Rocky Warner and last year’s champion, Matt Janczuk, have dominated victory lane. Many of those wins came with late races passes including a thrilling third to first last lap win by Warner last July. Week and week out, several different drivers show that every race is up for grabs until the checkered flag flies. This season, defending champion Janczuk has indicated that he doesn’t plan to compete weekly due to family commitments, which will open the door for someone else to give Warner a run for the title.

As competitive as the Broedel Energy Crate Sportsman are, many fans feel that the Pro Stocks are the show every week. Every week, the field rarely spreads out as they run two, three, sometimes four wide for positions on the spacious Vernon oval. Last season, Pete Stefanski had to wait until the final lap to claim his first Utica-Rome title as he battled Mike Welch, Luke Horning, Jim Normoyle, Chris Carr, and more to the final lap. Another talent laden field is expected this season to continue thrilling the Utica-Rome Speedway fans.


Pit gates will open at 12:30 p.m., grandstands at 2 p.m., with racing starting at 4 p.m. Race teams are encouraged to arrive early to fill out the appropriate paperwork that comes with the first race of the season.

For more information on the planned opening night plus much more including the full season schedule, admission prices, plus much make sure to visit us at www.uticaromespeedway.com. The speedway office can be contacted by calling (315)829-4557. Utica-Rome Speedway also has a strong presence on social media on Facebook, Twitter, and a newly added Snapchat account.