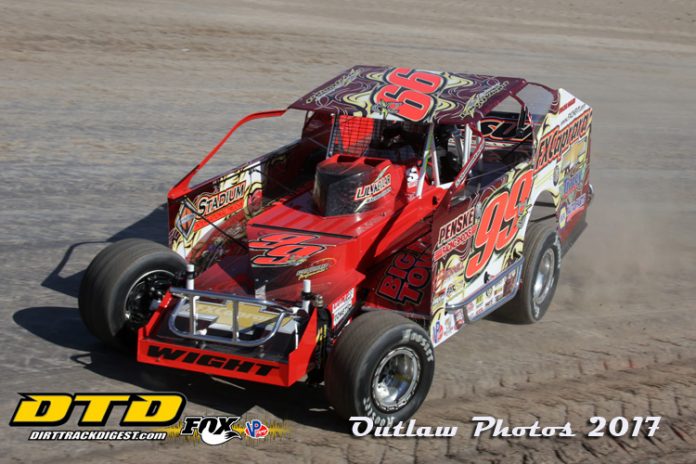 VERNON, NY – Lightning Larry Wight took the checkers in the Utica-Rome Speedway opener to grab his first win of the young season. While Wight started on the front row, the 30-lap affair was anything but an easy Sunday drive.

Danny Varin and Wight brought the field to the green for the first Gates Cole Insurance Modified feature of the season, with Wight leading the opening handful of laps over Varin and third starting Alan Johnson. By the fifth circuit, Johnson worked around Wight on the rough, tricky surface and immediately opened up a significant gap over Wight, Varin, Tim Fuller, and the remainder of the field.

While Johnson kept a rapid pace at the front of the field, a number of drivers who started deeper in the field began working forward, such as Bobby Varin and Matt Sheppard, who beat Johnson in their heat race earlier in the night by just .02 of a second but was forced to start at the rear of the field after switching to a backup car.

After building up nearly a full straightaway, Johnson’s night came to a grinding halt, as the Friendly Ford #14J pulled to the infield off of turn four coming to complete lap 16. Johnson’s misfortune handed the lead to Wight, now being pursued by Fuller and the Varin family, with Bobby trailing Danny. Behind them, Sheppard and Pat Ward fought over the last spot in the top 5, with Sheppard ultimately winning the battle.


Through the remainder of the event, Wight was able to navigate lapped traffic with relative ease, opening up and maintaining a solid second and a half to two second advantage over Fuller. Bobby Varin was eventually able to wrestle away the third spot from Danny, and he chased down Fuller in the closing circuits. However, Varin’s charge stopped at third, as he was unable to clear Fuller as the duo raced through heavy lapped traffic in the last laps.

Through challenging conditions, Wight was able to hang on to grab his first win of the year aboard his FXCaprara, Gypsum Express #99L Bicknell, crossing the line in front of Fuller, Bobby Varin, Danny Varin, and Sheppard. Ward, Alan Barker, Billy Decker, Mike Mahaney, and Mitch Gibbs rounded out the top 10 in the caution free Modified feature.

“Alan Johnson was getting through the holes a lot better than us,” stated Wight in victory lane. “I decided to just save the car and hold on for second, we weren’t going to beat it up trying to go for the win, but we were fortunate enough, and he was unfortunate enough, and we were able to go until the end.”