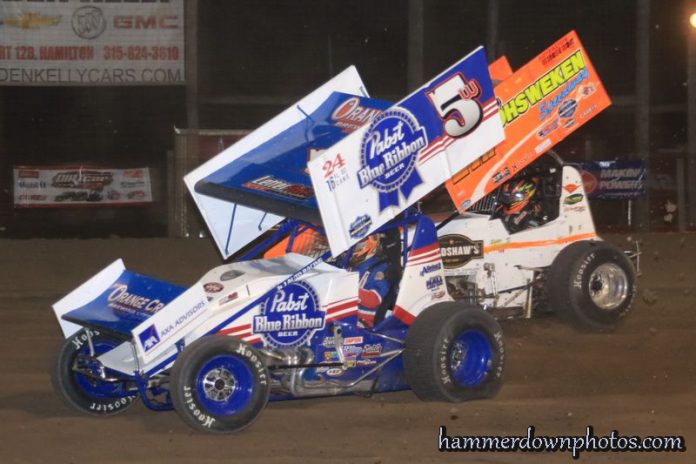 VERNON, NY – Lucas Wolfe walked out of Utica-Rome Speedway on Sunday night as the overall Gladiator Champion after a pair of hard fought 20 lap features.  Wolfe finished third in the first A-Main before an impressive slide job on the final lap to beat Chuck Hebing in the second feature to take the win.  The combined results put him on top at the end of the night.  Danny Varin took home the win in the first 20 lap A-Main while Larry Wight took the Gates-Cole Auto Insurance Modifieds.  Dave Marcuccilli was the winner in the Broedel Energy Sportsman while Robbie Speed took the Pro Stock victory on Budweiser Night.
In the first 20-lap A-Main for the Sprint Cars Danny Varin rocketed out the lead from his pole starting position.  Varin was challenged early by Davie Franek before Wolfe entered the fray.  Varin was masterful in traffic keeping both Wolfe and Franek at bay.  Neither Franek nor Wolfe could shake each other as they raced for second.  Varin held on to pocket the $1,500 for winning the first feature.  After pulling a ten inversion for the second feature Varin took the Gladiator Challenge and elected to start in the rear in hopes of claiming a $1,000 bonus from Orange Crate Brewing Company.  Franek finished second over Wolfe, Dylan Westbrook and Hebing.
The nightcap kicked off with Coleman Gulick and Jessica Zemken bringing the 20-lap feature to life.  Zemken snagged the lead away from Gulick.  Gulick chased her down and made the pass for the lead on five.  Hebing then found the top spot a lap later as he blasted by Gulick off of turn two on the outside.  Gulick refused to quit as he hung with Hebing.   They battled with Westbrook and Wolfe working each other over for third.  Unfortunately for Varin, his run to the front came to an end while running just outside the top five.  He ended up getting over to bring out the red on lap 11.  Hebing stayed in the front once green was shown again.  Wolfe began his charge during the final couple of circuits to get to second.  Then, on lap 20, Wolfe got a great run off the exit of turn two.  He ran down Hebing on the backstretch to set up the perfect slider in turns three and four.  He led off the final corner to take the checkered flag.  Hebing finished second followed by Gulick, Westbrook and Franek.
Fresh off his 360 Sprint victory in the first of the Gladiator Twin 20 lap A-Mains, Danny Varin led the Gates-Cole Auto Insurance Modified field to the green flag, but it was fellow front row starter Larry Wight that would grab the lead.  Looking for his second victory of the weekend, third place starter Alan Johnson would wrestle the lead from Wight on lap five.  Johnson would open a comfortable lead as the field continued leaving the rest of the field to battle for position.  Wight, Tim Fuller, and Varin put on a race among themselves for position as the field reached the halfway point on lap 15.
The complexion of the race changed drastically a lap later when Johnson slowed and limped into the infield, handing the lead over to Wight.  As the race continued under green, Wight would set a quick pace as he began to pull away.  11th place starter Bobby Varin was on the move throughout the later stages of the race as broke into the top five with 10 to go.  The elder Varin then passed his son Danny a lap later and began going chasing second place running Fuller.  Varin’s charge to the front would stall there as Wight would take his first win of season at the Vernon oval over Fuller, Bobby Varin, Danny Varin and last place starter Matt Sheppard.
AJ Filbeck and JaMike Sowle led the Broedel Energy DIRTcar Sportsman with Filbeck showing the way to lead lap one.  Dave Marcuccilli would wrestle the lead away from Filbeck as the field crossed for lap two and he immediately began to open up a comfortable margin on the rest of the field.  The two players for the title last season were making their presence felt right away as seventh place starter Rocky Warner moved into the third spot by lap four while Matt Janczuk was into the top five by lap six after starting 14th.  Janczuk’s charge wasn’t complete though as he continued his march to the front as he got by both Warner and Filbeck to grab second on lap nine.  Marcuccilli wasn’t going to be stopped though as he marched on to his second career Utica-Rome Speedway win.  Janczuk, Chris Mackey, Warner, and Kyle Inman rounded out the top five.