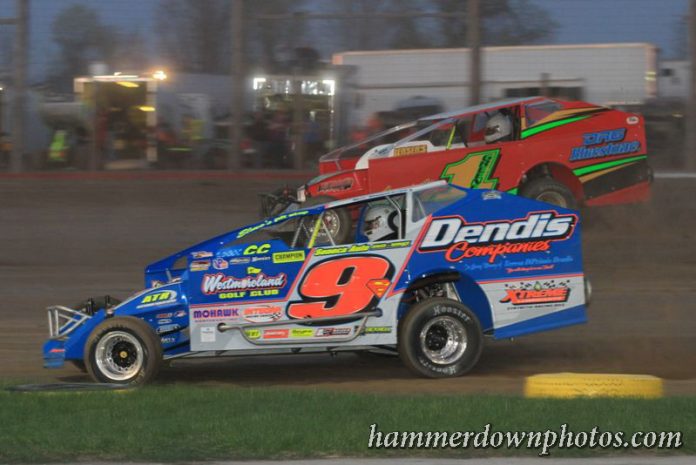 VERNON, NY- After beginning the 2017 season this past Sunday, Utica-Rome Speedway is again ready for another exciting night of short track dirt racing this Sunday, April 30, as the Super DIRTcar Series for both the Sportsman and Pro Stocks makes their long-awaited return to the Vernon oval after a 13-year hiatus. They will be joined by a complete show of Gates-Cole Auto Insurance Modifieds on Wilber-Duck Chevrolet Night.

This past Sunday, Larry Wight was both good and a little lucky as he scored his first win of the 2017 season in the Gates-Cole Auto Insurance Modifieds. Running a very competitive second place on lap 16 when then leading Alan Johnson had driveline issues and limped to the infield, handing the lead over to Wight. It was a position that he would not relinquish as he outran Tim Fuller, Bobby Varin, Danny Varin, Matt Sheppard, Pat Ward, Alan Barker, Billy Decker, Mike Mahaney, and Mitch Gibbs to the checkered. This Sunday, another full show of exciting Gates-Cole Auto Insurance is scheduled, thrilling fans they hustle around the spacious half mile.

Dave Marcuccilli dominated the Broedel Energy Sportsman main event last Sunday, as he outraced 49 other competitors to grab the win. This Sunday, many of the same competitors will be on hand to try to take the big Super DIRTcar Sportsman Series win including defending track champion Matt Janczuk, Rocky Warner, Chris Mackey, Jason Rood, Stephen Denton, AJ Filbeck, Brad Alger, Charles Tibbitts, Kyle Kiehn and more as they look to take on possible series invaders such as Shane Pecore, Ron Davis III, Brad Rouse, Martin Pelletier, Louie Jackson Jr. and many more. The last time the series made a stop at Utica-Rome Speedway was in 2004 when the Sportsman division still utilized open motors, and was won by veteran Mike Button.

The Pro Stock main event came down to the final corner this past Sunday as Robbie Speed held off Luke Horning to the finish line to score his first career Utica-Rome Speedway win. Speed will be in attendance again this Sunday as he looks to make it two in row and take the Super DIRTcar Pro Stock Series win. Speed will be joined by a tough cast of Utica-Rome Speedway regulars such as 2016 UR champion Pete Stefanski, Horning, Mike Welch, Nick Stone, and more with a host of invading teams expected to compete for the victory. Like the Sportsman, the last time the Pro Stock series competed at the Vernon oval was in 2004 with current Broedel Energy Sportsman competitor taking the win.

Fans are reminded that due the challenging track conditions this past Sunday caused by extremely wet grounds combined with clear sunny skies and brisk wind, Utica-Rome Speedway management has opted to move the starting time back to the traditional 6 p.m. start time. Pit gates will open at 3 p.m. with grandstands opening at 3:30 p.m.


For more information, including a full schedule, admission prices, and more, make sure to visit us at www.uticaromespeedway.com. We can also be found on Facebook, Twitter, and Snapchat. The speedway office phone number is (315)829-4557.