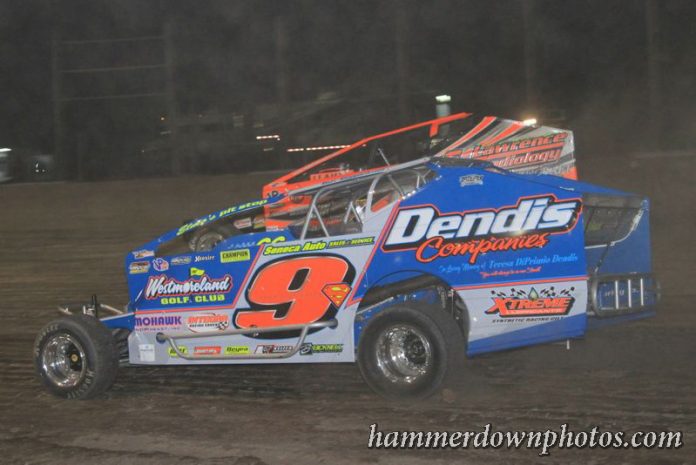 VERNON, NY – On a bitter cold spring evening this past Sunday April 30, the fans were treated to another exciting night of action on Wilber-Duck Chevrolet night that saw some late race fireworks and late race charges to the win. Matt Sheppard found himself in familiar territory as he took the Gates-Cole Auto Insurance Modified win while Rocky Warner made a late race pass of leader Dave Marcuccilli to win the DIRTcar Sportsman Series event. Another last lap pass by Robbie Speed brought him another win as he took the checkered in the DIRTcar Pro Stock Series feature event.

Steve Paine and Mike Maresca led the Gates-Cole Auto Insurance 30 lap main event with Maresca grabbing the initial lead. A lap three caution brought the field back together and the restart, it third place starter Marc Johnson sweeping by the top two to take over the top spot. Johnson would hold on to that spot while Maresca, Robbie Bellinger, and Alan Johnson were battling for the podium positions. By lap seven, defending track champion Matt Sheppard broke into the top five after 12th and was looking for more. Another caution slowed the field again on lap 10 with Marc Johnson still the leader with Maresca, Alan Johnson, Sheppard, and Bellinger still showing in the top five on the scoreboard.

Maresca regained the lead on the restart, dropping Marc Johnson to second, with Johnson battling back to lead lap 13. Maresca powered back by to again lead on lap 14 with Sheppard following him through to grab the second position. Sheppard’s charge was not over as he slipped by Maresca to grab the lead on lap 17 and he immediately began to pull away. With 20 laps complete, Sheppard was showing the way with Maresca, Marc Johnson, rookie Claude Hutchings Jr., and Alan Johnson chasing.

With Sheppard easily showing the quick way around, it was a heated battle between Maresca, Marc Johnson, Alan Johnson, and Hutchings all battling hard for position until the final caution of the night flew on lap 28. The restart saw Sheppard charge off again leaving the field behind, but now a new player was entering the mix. Mike Mahaney, who restarted outside the top five, found something on the extreme outside lane and was charging by cars to break into the top five. With one to go, Mahaney was scored at the line in fifth and entering the final turn he blasted around the top and cut to the bottom getting by Marc Johnson for third and barely losing out the runner up spot to Maresca at the line. The scoreboard show Sheppard, Maresca, Mahaney, Marc Johnson, and Danny Varin filling out the top five.

The start of the DIRTcar Sportsman Series 30 lap main event saw pole sitter Matt Janczuk launch to the lead with Kyle Kiehn, Dave Marcuccilli, Kyle Inman, and Tyler Trump in tow. It didn’t take long for Marcuccilli to make his presence felt as he was in second on the following lap and by lap three he was the leader. Much like the week prior, Marcuccilli was pulling away for the rest of the field, leaving Janczuk, Rocky Warner, Kiehn, and Chris Mackey to battle for the remaining top five spots. A pair of cautions brought Marcuccilli back to the rest of the field just past the halfway point on laps 16 and 17, but again Marcuccilli was too strong and pulled away on the restarts.


The final caution on lap 23 gave the field on more shot at the leader and now second place was looking to capitalize on it. Janczuk was able to regain the runner-up spot on lap 24 but Warner regained the spot a circuit later. Warner then set off after Marcuccilli and the duo then ran side by side for a lap and a half until Warner was able to wrestle the lead away on lap 28. Warner would hold to score the big series win over Marcuccilli, Janczuk, a hard charging David Schilling and AJ Miller.

Rob Yetman and Pascual Payeur made up the front row of the DIRTcar Pro Stock Series 30 lap feature with Yetman jumping out to the lead at the green. The winner from the previous week, Robbie Speed, took over the lead on lap four as he looked for his second consecutive win at the Vernon oval. Speed was dominating the early portion of the event. Luke Horning, after starting 11th on the grid, was into the mix as the field neared halfway as he made his way into the second spot by the halfway mark that saw Speed as the leader over Horning, Yetman, Nick Stone, and Jason Casey.

A couple of late race cautions took the 30-lap event into “overtime” with series rules calling for a green, white, and then checkered flag finish. A wild lap 29 restart saw Horning slip into the lead to be scored the leader and as the field was going to the checkered, Horning went around in the front of the field after some contact as the cars bounced through the hole in turn four, bringing out the yellow again and setting up another two-lap dash. After Horning’s spin, Yetman was the leader with Speed right with him on the restart. Yetman was able to hold on to the lead as the field took the white flag but as the top two exited turn four for the checkered, Speed slid up in front of Yetman to make another dramatic late race pass for the win. Yetman crossed in second ahead of Mike Welch who made a late charge to gab the third spot. Casey and Dan Older rounded out the top five.

Next Sunday, May 5, the 2017 season keeps on rolling with another show Gates-Cole Auto Insurance Modifieds, Broedel Energy DIRTcar Sportsman, DIRTcar Pro Stocks and Novice/Rookie Sportsman. Gates will open at 3:30 p.m. with racing set to go at 6 p.m.