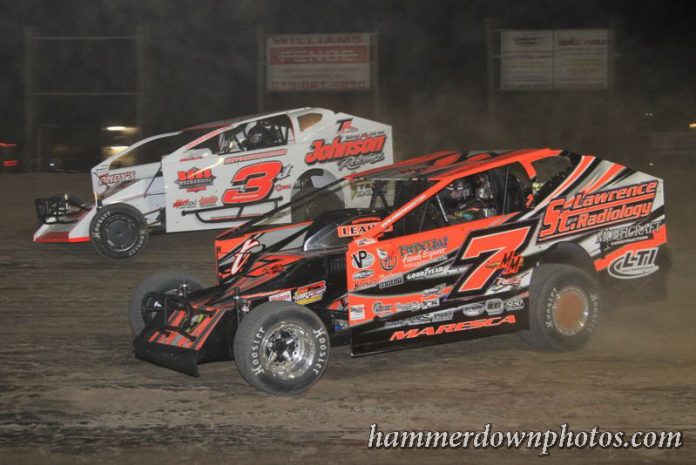 VERNON, NY- This Sunday, May 7, race number three of the young 2017 season is scheduled at the Utica-Rome Speedway when Wilber-Duck Chevrolet presents an exciting show of Gates-Cole Auto Insurance Modifieds, Broedel Energy DIRTcar Sportsman, DIRTcar Pro Stocks, and Novice Sportsman.  The King’s Crash’em and Smash’em Demolition Derby originally scheduled from April 2 will also take place once all the racing action is completed.
Matt Sheppard, the defending track champion, is the current point leader in the Gates-Cole Auto Insurance Modifieds after winning the main event this pastSunday.  Sheppard leads a pair of Varins in the rankings with Danny in second and his father Bobby in the third spot.  Mike Mahaney and Pat Ward round out the top five with Tim Fuller, Claude Hutchings Jr., Rob Bellinger, Mike Maresca, and Marc Johnson filling out the top five spots.  In addition to Sheppard winning this past week, Larry Wight has also scored a feature win when he won the season opener.
Opening night winner Dave Marcuccilli is the current point leader in the Broedel Energy DIRTcar Sportsman based on his opening night victory over Matt Janczuk, Chris Mackey, Rocky Warner, and Kyle Inman.  Looking at the second half of the top ten in the standings shows Jason Rood, Stephen Denton, AJ Filbeck, Zach Sobotka, and Charles Tibbitts holding down those positions.  Warner joins Marcuccilli in the win column after making a late race pass this Sunday to grab the Sportsman DIRTcar Series win over Marcuccilli.
Robbie Speed has won both the DIRTcar Pro Stock events held so far this season as he won the opener then backed that up with the win in the big DIRTcar Pro Stock Series main event this past Sunday.  Neither win came easy, however, as in both events it looked like Speed was on cruise control on his way to victory until late race passed saw him lose the lead both times.  In each, Speed made last lap passes to regain the lead to score the wins.  Luke Horning, who was a late race challenger in both events, sits in second over defending track champions Pete Stefanski, Mike Welch, Nick Stone, Todd Hoffman, Shane Henderson, Ernie Staelens, Gus Hollner, and Jerry Streeter.
This Sunday will also mark the first time the Novice Sportsman run as a separate division in 2017.  The Novice Sportsman division is designed for drivers with limited, one year or less of experience, to run with drivers with their skill level to gain seat time without the pressure of running with experienced drivers.  The division has very limited payoff and follow the guidelines of neighboring tracks Novice or Limited Sportsman rules such as Fulton Speedway.  Utica-Rome Speedway management has the right to determine eligibility for drivers to compete in the Novice Sportsman, and decisions are final.
When the racing action is completed, the King’s Smash’em and Crash’em Demolition Derby that was originally scheduled to be part of the April 2 Chill Factor event will take to the front stretch.  Drivers will thrill fans as they crash into each other until the last car is running.  Anyone interested can enter with an eligible car with entry fees set at $25 for adults and $15 for youth drivers, plus a pit pass.
Gates are scheduled to open at 3:30 p.m. with racing set to begin at 6 p.m.
For more information, log on to www.uticaromespeedway.com or call the speedway office at (315)829-4557.  Utica-Rome Speedway is also very active with several social media platforms including Facebook, Twitter, and Snapchat.