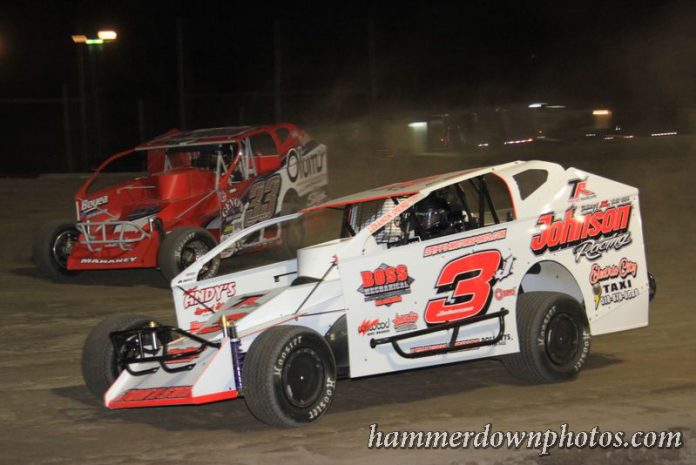 VERNON, NY – With the cooperation from Mother Nature, Utica-Rome Speedway looks to get back on track this Sunday, May 14, for a big Mother’s Day event. Wilber-Duck Chevrolet will present a weekly event for the Gates-Cole Auto Insurance Modifieds plus the return of the King of Dirt Sportsman Series and King of Dirt Pro Stock Series.

The King of Dirt Sportsman 30 lap main event will pay $1,000 to win plus a $250 bonus from Andy’s Speed Shop, making it a total of $1,250 to win. Some of the best Sportsman drivers in the region are expected to not only chase the top prize, but this event carries points for both the King of Dirt Series and the DIRTcar Sportsman Series. This event is part of the DIRTcar Sportsman Series East Region in the new regional format for the series. In two events completed at the Utica-Rome Speedway, 62 different competitors have attempted to qualify with Dave Marcuccilli and Rocky Warner each grabbing wins.

The Pro Stocks will also join in on the fun with a $700 to win, plus $150 bonus for an $850 payday in the 30 lap King of Dirt Pro Stock Series main event. So far, 37 different drivers have seen action at the Vernon oval in 2017 but is was Robbie Speed in victory lane in both feature events completed. Luke Horning, Mike Welch, Pete Stefanski, Luke Horning, Rob Yetman, Todd Hoffman, Gus Hollner, and Jim Normoyle are just some of the drivers that were in the mix in the previous two events and very well could be this Sunday.

Both the Sportsman and Pro Stocks will be lined up by timed hot laps with the top finishers redrawing for feature starting spots. More information on the King of Dirt Series can be found in Facebook at www.facebook.com/kingofdirtracing/.

The Utica-Rome Speedway website can be found at www.uticaromespeedway.com, while the speedway office can be contacted at (315)829-4557. Utica-Rome Speedway also maintains a presence on several social media platforms including Facebook, Twitter, and Snapchat.