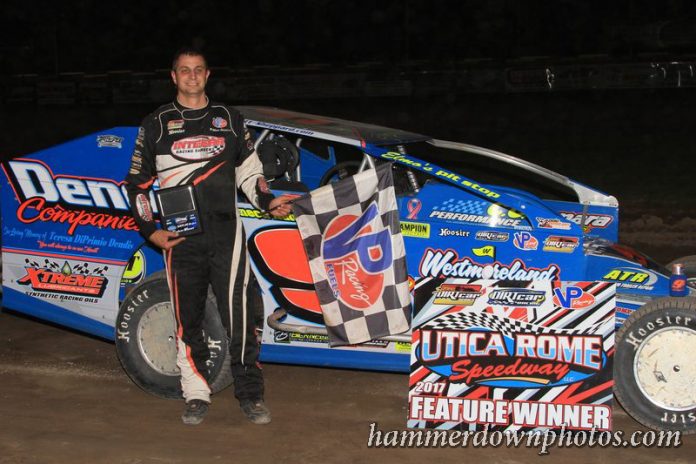 Matt Sheppard took the win Sunday night at the Utica Rome Speedway, besting a strong field of 25 Modifieds. The win was Sheppard’s second of the season at the track, winning the previous Modified race held on April 30th.

Former Open Sportsman competitor Jack Miller snatched the lead away from polesitter Beth Bellinger off the initial green flag, with sixth starter Pat Ward in tow. Ward worked his way to the front and past Miller as the field completed lap four, but a quick yellow for debris slowed the field just a lap later. Marc Johnson restarted fourth and nearly took the lead, but slotted into second behind Ward. Behind him, Danny Varin and Sheppard waged battle for third. Another yellow for a slowing Mike Maresca brought the field together on lap nine.

The remainder of the race ran under green, with Ward opening up a small advantage over Johnson and Sheppard by halfway. On lap 17, Sheppard finally got past Johnson after working him over for a number of laps, and set sail after Ward. As Ward entered the first turn on lap 18, he tried to pass a lapped car on the high side, but lost substantial time. Sheppard took advantage and dove under Ward for the lead.

Sheppard quickly opened up a large advantage, cruising to his second win of the year ahead of Pat Ward, Danny Varin, Marc Johnson, and Tim Fuller. The win was Sheppard’s 34th Modified win at the speedway, breaking his tie with Richie Evans to solely take third on the all-time Modified wins list at the track.


“I got up to the front real quick, and for a while I didn’t think I had anything for those guys,” Sheppard stated. “Luckily for us, it seems like the longer the race goes here, the better our car gets. I was able to find a groove I liked on the bottom and make up some good time.”

In Sportsman action, Alan Fink held off challenges from Dave Moyer and Matt Janczuk, fighting off the latter in a green-white-checkered finish to grab his first win of the year at the track and third overall, having taken both Sportsman checkered flags at the Brewerton Speedway this season.

The Pro Stock feature saw Mike Welch slip under Jim Normoyle for the lead on lap 15 of 20 and narrowly hang on to win another feature at the track. 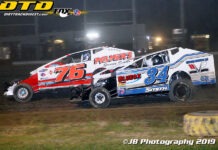 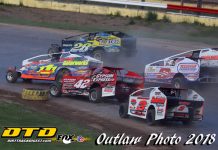