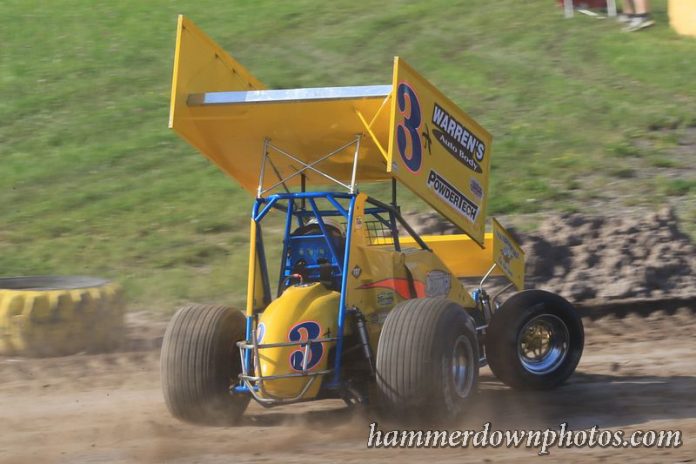 On a wet and wild night at the Utica-Rome Speedway, Jeff Trombley and Rocky Warner picked up big touring series wins. Trombley took the checkered in the CRSA 305 Sprint Car feature, while Warner claimed the King Of Dirt Sportsman event. Unfortunately, the skies won the Modified and King Of Dirt Pro Stock races, as a strong storm hit after the first two features.

Kyle Smith led early in the CRSA feature, trailed by closely by a pack of cars including Emily VanInwegen, Josh Pieniazek, Mike Kiser, Eddie Strada, and more. While all the aforementioned drivers took their shots at the lead during the early portions of the 20-lap feature, it was Pieniazek slipping by Smith to take the lead just before halfway. Pieniazek’s lead came to an abrupt and violent halt on lap 12, as he stuck a spinning lapped car and flipped wildly over the turn two banking. The lead was once more placed in the hands of Smith, as he bolted away on the restart.

Trombley started in the middle of the field, spending much of the first half of the event battling outside the top five. However, the Modified veteran began picking away at drivers, closing in on Kyle Smith late in the event. With four laps left, Smith hopped the thin cushion in turns one and two, only losing a couple car lengths, but enough for Trombley to slip by. Smith was unable to mount another charge, as Trombley cruised to the win in the 305 Sprint Car feature. Smith hung on for second, while Mike Kiser, Emily VanInwegen, and Dalton Herrick rounded out the top five.

After the CRSA feature, which was run under primarily light skies and very hot temperatures approaching 90F, the King Of Dirt Sportsman feature took the green. Cody Bleau and Nick Krause compromised the front row for the 30-lap affair, but third starting Connor Cleveland had worked his way to the front as the field completed the opening circuit. Rocky Warner wasted no time climbing to the top of the scoreboard, passing Krause and Cleveland to the lead by lap five. During a lengthy red flag for a multi-car pileup exiting turn four, the skies continued to grow darker and darker. The temperature dropped significantly from the near 90F just one feature ago, as some spectators even covered up with jackets and hoodies. The winds strengthened, and the lights surrounding the track had to be turned on to combat the darkness of the incoming storm clouds. However, the green flag waived once more.

When the race resumed, Rocky Warner quickly opened up a huge lead. Cleveland maintained second, while Krause ran strong in third. As the laps clicked off under green, the skies grew more and more threatening. Thankfully, the final 25 laps ran caution free, allowing the race to run the scheduled distance. The length of the race mattered little to Warner, as he cruised to the checkered nearly half a lap in front of Cleveland. Jeremy Pitts snuck by Krause with two laps left to claim third, and Michael Sabia finished fifth.

As Warner pulled into victory lane, the dark skies opened up. Rain had lightly fallen during the final seven laps of the Sportsman feature, but not enough to impact the racing. Victory lane and beyond was a different story, as the track was completely lost in the storm, forcing the cancelation of the Modified and King Of Dirt Pro Stock features. Once again, nature proved they are the one to beat in 2017, partially claiming yet another night at the Utica-Rome Speedway.