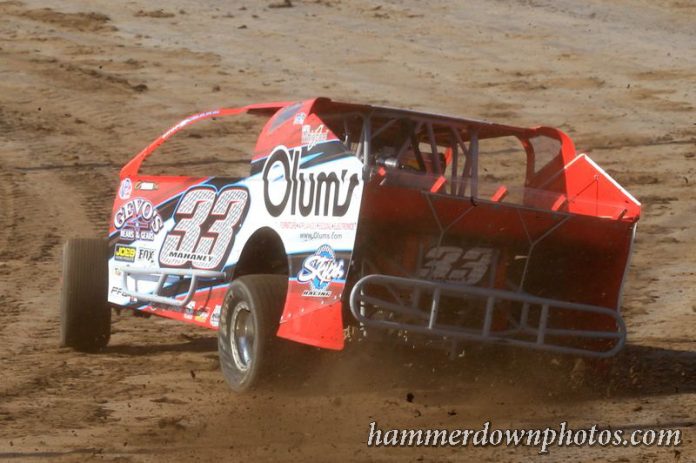 CONCORD, NC – When the Super DIRTcar Series rolls into Utica-Rome Speedway, a number of home track drivers will attempt to use their knowledge from weekly competition as an advantage in the New Yorker 100. Chief among that list are full-time Series regulars Mike Mahaney and Pat Ward.
Mahaney, a King Ferry, NY native, is looking forward to racing at the big Vernon, NY half-mile. It’s a change of pace from the smaller, high-banked bullring-style tracks the Series has visited in three of its first four races this season.
“You can kind of use the Big-Block power a little more,” Mahaney said. “When you’re running the Big-Block Modified Super DIRTcar Series, it’s nice to have a track that will use the motor.”
Genoa, NY driver Pat Ward echoed Mahaney’s sentiments and is looking forward to the extra space Utica-Rome’s larger configuration allows.
“Utica has lots of room with a top, bottom and middle (groove),” Ward said. “It’s just getting the power to the ground because it gets so slippery (that is challenging).”
Most drivers have become accustomed to the typically slick surface at Utica-Rome. However, Mahaney admits its still a tricky track surface to tackle, even for the weekly regulars.
“Racing on a slick track kind of makes you pull your hair out all the time,” Mahaney said. “It’s very challenging, especially when you have all that Big-Block horsepower. Half the time you can’t use it all.”
That’s not to say a powerful Big-Block motor can’t be useful. The track has had its heavy and fast nights, especially with plenty of early-season rain. However, with 100 laps on the schedule for the Sunday night showdown, it’s likely to get slick.
As a DIRTcar Racing Big-Block Modified home track, Utica-Rome’s regular drivers like Mahaney and Ward will already have a strong idea of how to handle the track with the Super DIRTcar Series rule package.
“This year, the rules are the same with the Series as they are weekly there, so you don’t have to change much,” Mahaney said. “There’s little differences, but being there every week I have a keen eye on what the track conditions are and end up like throughout the night. There’s a lot of good competition at Utica weekly, so it’s tough sledding there.”
It’s a tough battle at each Super DIRTcar Series race as well with 17 full-time drivers following the 2017 tour. Many of them will be trying to upset Matt Sheppard, the reigning Utica-Rome track and Super DIRTcar Series champion. Sheppard won the Series’ visit to Utica last July. So what does it take to be fast at Utica-Rome?
“You probably should go ask Matt Sheppard that,” Ward joked, while remaining tight-lipped. “There’s some different setup stuff that we do at Utica-Rome that seems to help us out.”
For additional event and ticket information on the New Yorker 100 presented by Clinton Tractor on July 2, 2017, visit www.uticaromespeedway.com or www.superdirtcarseries.com.