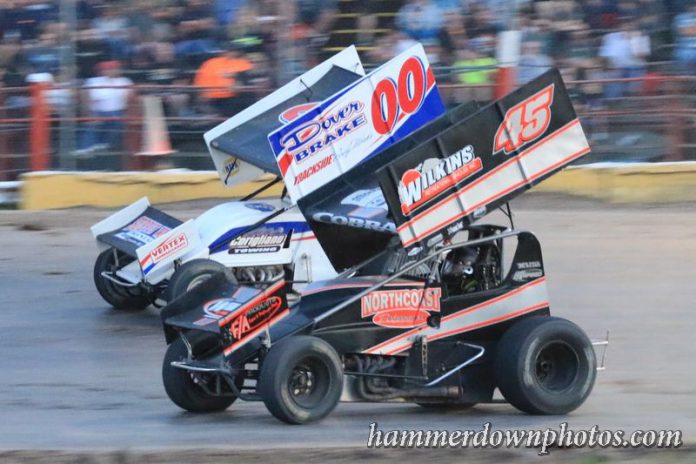 VERNON, NY – Chuck Hebing’s Donath Motor Worx Central New York Speedweek started with motor issues during heat in the engines at Can-Am Motorsports Park. He had more trouble at Canandaigua Motorsports Park. Hebing shook off the two poor nights to turn things around. The Ontario, N.Y., driver never finished outside of the top two from that point forward.

Hebing won at Brewerton Speedway Friday, finished second and Fulton Speedway Saturday and concluded the week at the Utica-Rome Speedway with a win. If only he could have started the week the way he finished, he may have had a shot at the title that was won by Danny Varin. Varin outlasted Mark Smith and Mike Mahaney for his first Speedweek title and the $1,000 payday that went along with it.

“It’s always good to go good here at Utica-Rome,” said Hebing after the win. “Danny (Varin) has this place figured out. He runs here a lot more than we do now. I think we had something for him tonight. We’ve had a good Speedweek. We had trouble at a couple of them, but it was good week.”


Mark Smith’s chance for the Speedweek title went down the tubes on lap eight. Smith brought out the caution as his wing collapsed causing him to slide off the speedway in turns three and four. Varin resumed the lead as the race got back up to speed before another caution came on lap 10 for Cory Sparks. Sparks stopped on the outside of turn four.

Varin led the way as the race went green again with Kinney and Hebing in tow. Hebing dispatched of Kinney as he now set his sights on another challenge in Varin. He saw his opportunity on lap 13. Hebing dove low in turn three while sliding up in front of Varin for the lead.

“He (Varin) was running the top so I drove across the middle,” mentioned Hebing. “Then I seen him so I made sure I lifted and turned down. I didn’t want to pinch him by any means. I’m pretty sure I left him a lane still. It was tight, but he knows how it is.”

Before another lap was run the pace was slowed for Ryan Susice as he spun. Coleman Gulick also had issues on his No. 14 as something broke in the left rear of car. At this point it was Hebing holding the number one position over Varin and Matt Tanner.

Green came again with Hebing fending off the challenges of Varin. Varin went to the bottom and tried to get the lead back, but Hebing had none of it. Hebing pulled away from Varin as he was faced by a strong effort from Tanner on the inside. Tanner tried multiple time to take second to no avail.

The difficulty for Hebing increased on lap 21 as he now had to deal with Varin right on his back bumper and slower cars racing at the back portion of the field. Hebing wasn’t going to open the door for Varin as he made a three-wide pass in between a pair of lapped cars. Once he did that he was able to pull away for the win.

“Lapped traffic is always tough,” said Hebing. “I learned that in Pennsylvania a few times. You make choices in lapped traffic and you make the wrong choice to slow down and be careful, usually the boys drive by you. Plus I heard it pays better to win.”

Varin, of Fonda, N.Y., held on to finish in the second position after doing all he could to try and get back around Hebing. It was the second night in a row that Hebing was able to get by him using a slider.

“I think we were better at the end,” stated Varin. “The long distance runs I was getting better. The short distance, every yellow was just killing me. I was slipping and sliding. Lesson learned. I need to get a few lessons on these slide jobs. We are going to get him (Hebing). This is place is fun to race when it’s like this, wide and slippery.”

The finish was good enough to earn him the title. He wasn’t expecting to get the championship. Initially, the team wasn’t even sure if they were going to be able to run all five events.

“It’s pretty awesome,” he said about the Speedweek title. “We didn’t go in planning to run the whole series. We were just taking it one race at a time.”

Tanner had his best run of the weekend as the Stephentown, N.Y., driver finished in the third position on the slippery surface. His was in the mix at the end but felt like he started too far back to challenge for the win.

“The first two nights were like this and I ran fourth and fifth,” cited Tanner about the smooth, shiny surface. “The last two nights we kind of struggled a little bit. I wish we would have started a little bit further forward. I think we had something for them guys, but it’s tough on a track like this coming from seventh. They started up in the first two rows. It was a good run to end the week.”

Kinney ended up coming home in spot number four while Bobby Varin, who started on the pole, was able to complete the top five on the final night of Speedweek in his only event of the week.