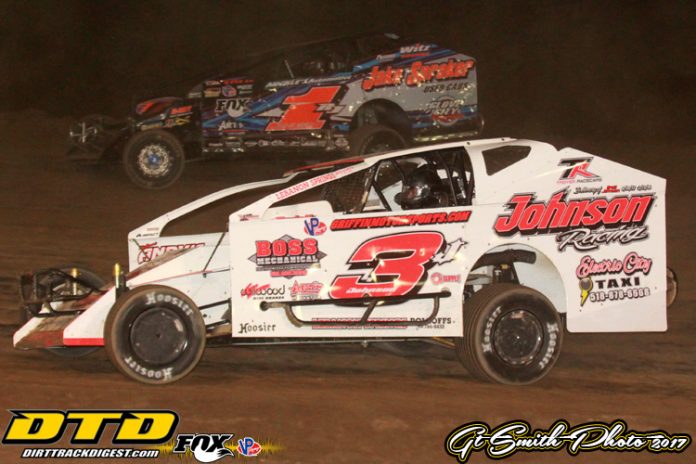 VERNON, NY- After an action packed show this past Sunday, Utica-Rome Speedway gets right back at it this Sunday, July 9, with another exciting show. Wilber-Duck Chevrolet and Marble Hill Inn present the King of Dirt 358-Modified Series which will compete in the Victoria 40 for a $3,000 payday. The Broedel Energy Sportsman, Pro Stocks, and Novice Sportsman will also be in competition.

With many of the top weekly runners off chasing the Super DIRTcar Series this Sunday, an influx of invaders is expected to come in and take their place when the Elmo’s Speed Supply King of Dirt 358-Modifieds comes to the Vernon oval. Weekly runner Marc Johnson will be on hand to keep the money home as well as Jack Miller and Randy Shantel. Just some of the drivers expected Sunday are Erick Rudolph, Chad Phelps, Matt DeLorenzo, Ronnie Johnson, Jeremy Wilder, Elmo Reckner, Mike Ricci, Allison Ricci, Nick Webb, Neil Stratton, Jason Herrington, Jessey Mueller, Bobby Herrington, and many more. The Victoria 40 lap affair will pay $3,000 to the winner with second getting $2,000, third getting $1,000 and $200 to start.

Probably the most competitive class week in and week out are the Pro Stocks as they are often two or three-wide lap after lap. Mike Welch is the current point leader over Luke Horning, Nick Stone, Todd Hoffman, Shane Henderson, Jim Normoyle, Ernie Staelens, Gus Hollner, Bill Knapp, and Jerry Streeter.

Due to weather, this weekend will the first time that the Novice Sportsman hits the track as a separate division. The class is set up to let less experienced drivers race among their peers to gain track time and experience. The payoff is very limited to keep more seasoned drivers from competing, and Utica-Rome Speedway management has final say on who can compete in the Novice class.


Fans are reminded to that this is the first week of the later starting time of 7 p.m. The goal is to have cars on the track with less sunlight on the track to prevent mid event track prep. The goal is to run the event in a quick manner to get fans on the road at a decent time. Gates will open at 4:30 p.m. with racing starting at 7 p.m. General admission for this Sunday, July 9, is $13 for adults with kids 16 and under free,