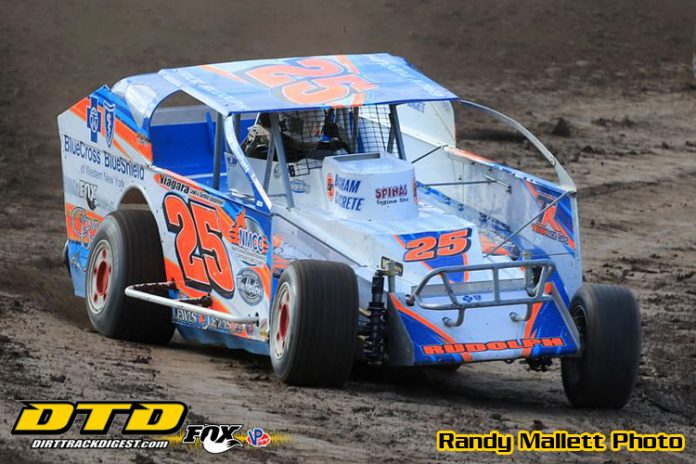 VERNON, NY – On Sunday night, the King of Dirt 358-Modified Series made its maiden voyage to the Utica-Rome Speedway. Fans were treated to a large car count of 43 Modifieds fighting for the $3,000 check awaiting one of them at the conclusion of the 40-lap feature. In the end, Erick Rudolph parked his #25 Troyer in victory lane as the Victoria winner.

Matt Delorenzo and Ryan Susice brought the strong field of small-blocks to the green for the first 358-only event at the track since 2008. Neither Delorenzo or Susice could lead for long, as third starter Jessey Mueller drove under both drivers to take the top spot before they hit the backstretch on the opening lap. In turn three, a large pileup forced a yellow, but the first lap was scored completed and Mueller retained the lead. Another yellow on lap 5 for Ronnie Johnson’s mechanical issues slowed Mueller’s pace again, but this time Erick Rudolph was the man to his outside.

On the restart, Rudolph was able to beat Mueller into turn 1, snatching the lead away and quickly establishing a big advantage. Mueller could not match Rudolph’s pace, but a caution with 18 laps in the books for Randy Shantel’s issues gave Mueller another shot. When the race resumed, Alan Johnson foiled Mueller’s plans to fight Rudolph, as Johnson grabbed second from Mueller. As the laps clicked off, Johnson was able to stay closer to Rudolph than Mueller could, but Johnson was not close enough to seriously challenge Rudolph for the lead.


One last yellow with 33 laps completed allowed Marc Johnson to restart on the rear bumper of Rudolph, but Johnson could never quite muster up the speed to get to Rudolph’s door. At the finish, Erick Rudolph crossed the line ahead of Marc Johnson, Alan Johnson, Susice and Mueller.

“It feels pretty good, we’ve been running here for a number of year, not regularly but consistently, and this is the first one we’ve won,” Rudolph noted in victory lane. “We got fortunate with redrawing fourth, and I was able to find a line I liked and kept doing it. I was just hoping for no cautions and hoping no one would get to me.”

When Rocky Warner gets to the lead in a Sportsman event, he very rarely is passed. However, AJ Filbeck was able to do just that as the pair battled through traffic late in the feature. Filbeck led from the drop of the green, but Warner was able to slip by with three laps remaining. Warner seemed to be well on his way to victory, or at least until he was bottled behind lapped cars running side by side. Filbeck took advantage and dove under Warner, taking the lead back with two to go. Just as fast as he regained the lead, Warner stole it right back as Filbeck was now the one caught in traffic. When the checkered flag finally waived, Warner was the man out front, scoring another feature win in the division. Filbeck crossed in second, followed by Matt Janczuk

In Pro Stocks, Mike Welch used a mid-race restart to catapult to the win, crossing the line in front of Jim Normoyle and Shane Henderson. Joe Abbass scored the victory in the first Novice Sportsman feature of the year, wrestling the lead away from Skylar Greenfield and holding off Jimmy Moyer.