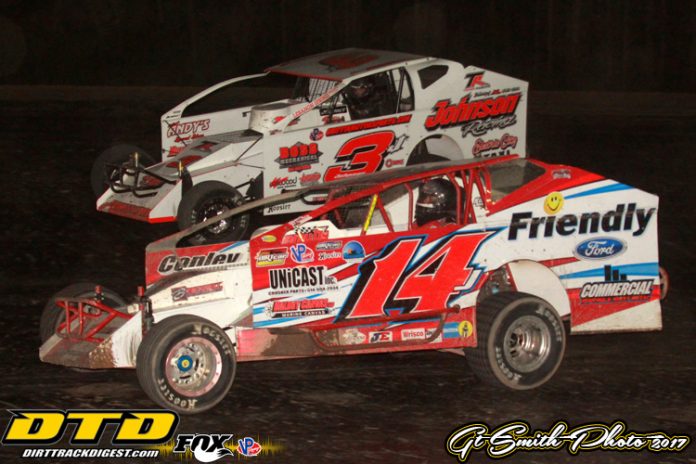 VERNON, NY – This Sunday, July 16, Lalonde Electric and VP Racing Fuels will present a huge show of DIRTcar racing that will feature two 30-lap Gates-Cole Auto Insurance Modified features plus the Mike Martin Memorial $1,000 to win event for the Broedel Energy Sportsman. The Pro Stocks and Novice Sportsman will also be in competition on this exciting night of racing. The best part for the fans is that they will get all this action for the weekly regular admission price of $13.

Spearheaded by Carole Martin and family plus close friends, over $1,200 will be added to the weekly purse providing the top ten with some extra money plus some other bonuses. This week’s 20 lap main event will pay $1,000, while the remainder of the top 10 will pay $550, $350, $250, $200, $175, $165, $155, $150, and $140 respectively. Also, heat race winners will get $50 for efforts (based on four heats) while the ninth-place runner on lap nine will receive an additional $50. The winner of the 20-lap main event will also be guaranteed for the $5,000 to win Ultimate Sportsman Shootout on Sunday July 23. Like last year, children in attendance can expect some additional activities or treats in addition to the weekly bike giveaway.

The race is dedicated to Mike Martin who was a lifelong racing enthusiast, engine builder, and consultant to many drivers at the Utica-Rome and Fonda Speedways. His selfless passion for supporting drivers and “joining their families” in the sport will remembered by many. Aside from his infectious laughter, he was known for his attention to detail and to “do the right thing”, a belief he learned from his family. The race bonuses and kids club sponsorship for this event was organized by Carole Martin and the Martin family.

Matt Janczuk leads a strong field of Broedel Energy Sportsman in the point standings with Chris Mackey, AJ Filbeck, AJ Miller, Kyle Inman, Mark Effner, Kyle Kiehn, Brent Joy, Stephen Denton, and Dave Moyer rounding out the top 10 positions. Rocky Warner leads all drivers with three wins for the season with Mark Effner, Dave Marcuccilli, and Alan Fink have one win each. This week it will be a draw for heats with a redraw for the feature and full points will be awarded. An influx of invaders is also expected with the extra money on the line and with drivers looking to prepare for the Ultimate Sportsman Shootout.


Mike Welch has been victorious in the last two main events for the Pro Stocks and now hold the point lead over Shane Henderson, Jim Normoyle, Ernie Staelens, and Bill Knapp. Mike Welch and Robbie Speed each have two wins apiece.

The Novice Sportsman made their debut last Sunday with Joe Abass the winner. They will also be in action this Sunday.

Once again, Utica-Rome Speedway will be using its mid-summer hours with gates opening at 4:30 p.m. and racing starting at 7 p.m. Again, all this action is just $13 at the grandstand gates.