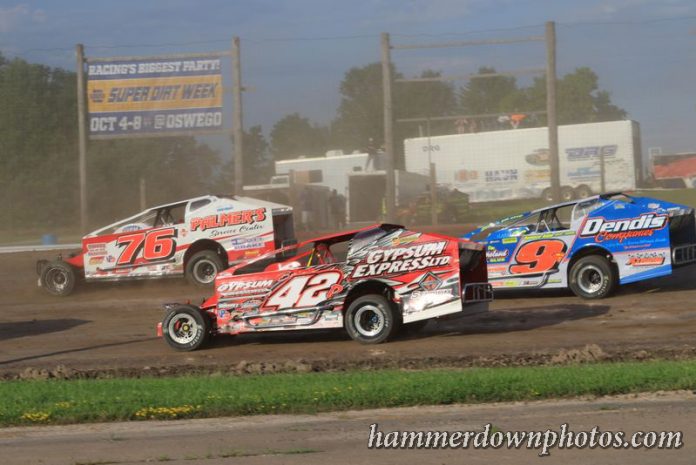 In the first feature, former Open Sportsman track champion Steve Way took command at the drop of the green, but was slowed with an early caution on lap two. On the restart, Claude Hutchings passed Way for the lead and set sail, opening up a big advantage in just a few laps. As Hutchings skipped away in his new Bicknell, his old one being wrecked in the Super DIRTcar Series event at the track just two weeks prior, Pat Ward slid under Way for second, completing the pass with seven laps completed. Alan Johnson followed suit that same circuit, pushing Way to fourth in the running order.

While Hutchings was driving as fast as he could in search of his first Modified win, Ward was driving just a little bit faster. By halfway, lap 15, Ward had closed in on the rear bumper of Hutchings, peeking inside every turn. After working Hutchings over, Ward completed the pass just two laps later and quickly opened up a solid lead.

Behind the top two, Sheppard had made significant progress, snatching third from Alan Johnson with 21 laps scored and taking off after Hutchings. While Sheppard disposed of Hutchings for second with two laps left, the gap between him and Ward was far too big to overcome.


When the checkered dropped, it was Pat Ward getting his first Modified win of the year in just the fourth points event of the season, trailed by Sheppard, Hutchings, Alan Johnson, and Bobby Varin.

“It’s hard to win. You’re running against the best guys Friday, Saturday, and Sunday. It makes you better running against those guys, and when you win one it really feels good,” noted Ward. “When I got into second, I was wondering whether I could catch Claude (Hutchings), he was running darn good up there. But, my car was locked down pretty good, and we were able to get up to him and get by him.”

Brandon Walters led the field to the start of the second 30-lap feature, taking control of the pace early in the event. As Walters clicked off laps out front, Tim Fuller gave chase, starting sixth but working up to second in the opening laps.

While the top two ran identical lines in turns three and four, the other end of the Speedway is where their lines varied, with Walters up top and Fuller down low in turns one and two. Fuller’s line paid dividends on lap nine, as he was able to get the bite he needed to drive past Walters for the lead.

Meanwhile, Sheppard was on the charge, claiming third at the same time. Walters’ stint in second did not last long, as Sheppard rolled under him for the runner up spot on lap 12.

While Fuller had built up a seemly comfortable lead, it evaporated in what seemed to be an instant, as Sheppard rapidly closed in. Coming to complete lap 18, Sheppard found the bite he needed on the bottom of turn four and drew even with Fuller as the pair raced past the finish line.

Having the preferred line, Sheppard completed the pass in turn one and darted away from Fuller. Over the final ten laps, Sheppard opened up a huge lead over Fuller, who in turn held an even bigger lead over the battle for third.

Said battle for third included Walters, Rob Bellinger, and earlier winner Pat Ward. Bellinger bested that battle, but had not nearly the time to begin catching either of the top two.

After 30 caution-free circuits, it was Matt Sheppard picking up his third win of the season at the track, distantly chased by Fuller, Bellinger, Ward, and Marc Johnson.

“Timmy (Fuller) was real good tonight, and Pat (Ward) was real good tonight,” Sheppard said of his competitors in victory lane. “We were good in that first feature, but we just came on too late. We were good in the heat, and good in this second feature, these guys just had this car spot on all night. It’s nice to get a couple features in, being the middle of July and just running our fourth and fifth points races.”

In the Mike Martin Memorial for the Sportsman division, Kyle Inman and Kevin Root waged battle from the drop of the green, running door-to-door for a number of laps. Well, their battle was for the lead until Dave Marcuccilli charged to the front, driving to the lead from his 10th starting spot by halfway. Marcuccilli cruised to the special 20-lap win worth a $1,000, plus a guaranteed starting spot in next week’s huge $5,000-to-win event. In the Pro Stock division, Mike Welch took the lead early in the event, and never looked back for another win at the track.