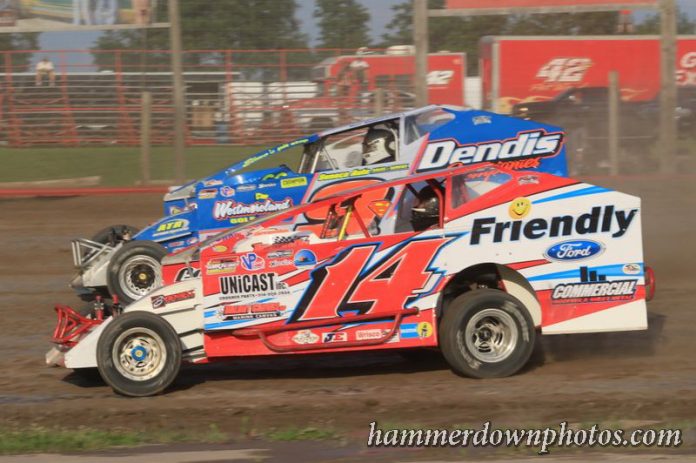 VERNON, NY- After a scheduled week off, the night DIRTcar Gates-Cole Auto Insurance Modifieds are back this Sunday July 30 at Utica-Rome Speedway for an exciting weekly show along with the Broedel Energy Sportsman, Pro Stocks and Novice Sportsman. The action-packed night, presented by Gates-Cole Auto Insurance and the Gene Kotary Memorial, will begin at 7 p.m. with gates opening at 4:30 p.m.

In memory of Gene Kotary, the Gene Kotary Memorial is donating extra money to the Pro Stock purse. This week’s winner will get an extra $100, making the winner’s share $400 while the remaining top five positions will also receive extra money. Mike Welch, the current point leader in the Pro Stocks, has been on roll as of late as he has been victorious in the last three-point events. Shane Henderson, Jim Normoyle, Ernie Staelens, and Bill Knapp round out the top five in points.

Gene Kotary was a competitor during waning asphalt years at Utica-Rome Speedway, collecting 10 wins between 1975 and 1978 while also grabbing the 1978 track title in the Asphalt Charger/Street Stock division. Kotary also competed with success at the Fulton Speedway as well. He passed away on October 23, 2016.

Matt Sheppard continues to lead the Gates-Cole Auto Insurance Modified point standings with three wins over a talented weekly field. Pat Ward, on the strength of his win on July 16, has moved up to the runner-up spot in the standings over Danny Varin, Tim Fuller, Bobby Varin, Marc Johnson, Rob Bellinger, Alan Johnson, Claude Hutchings Jr., and Mike Mahaney. Will someone new find victory lane this Sunday or will Sheppard continue his march through the Utica-Rome Speedway history books?


Also scheduled are the Novice Sportsman, a class that gives newer or less experienced drivers a chance to race against their peers. With a limited payout, the division is designed to give drivers seat time before moving up into the Broedel Energy Sportsman.

Adult admission for this Sunday is just $13 while Senior and Military are $10. Children 16 and under are free.

For more information, please log on to www.uticaromespeedway.com or call the speedway office at (315) 829-4557. Up to date information can also be obtained by following us on Facebook and Twitter.