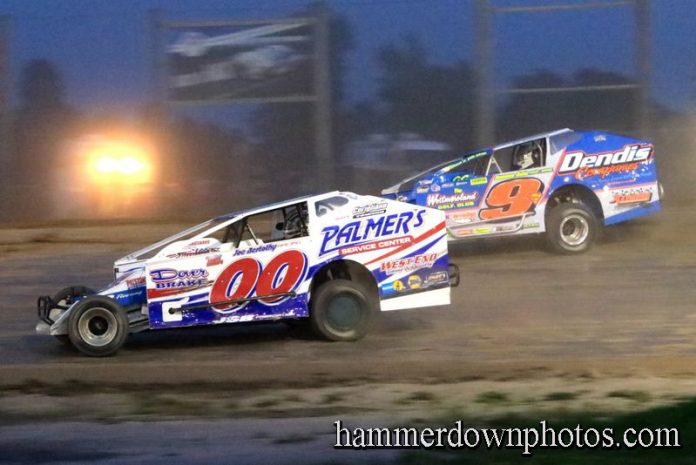 The Gates-Cole Auto Insurance Modified 30-lap feature started with Randy Shantel and Mike Mahaney bringing the field to starter Matt Burdick’s green flag with Mahaney taking the early lead. Mahaney’s lead at the point was short-lived as fifth place starter Bobby Varin drove by to lead lap three. Varin lead over the field was erased on lap six as Rob Bellinger slowed to bring out the caution. The restart saw Varin continue the lead and on lap 10, it was Varin over Mahaney, 12th place starter Matt Sheppard, Mike Maresca, and Marc Johnson.

Sheppard’s charge to the front continued as he completed the pass of Mahaney to grab second on lap 14 and set his sights on the leader Varin. Sheppard caught Varin by lap 17 and two laps later, Sheppard took the lead. With 10 to go, the scoreboard showed Sheppard, Varin, Mahaney, Pat Ward, and Maresca in the top five spots.

With Sheppard running away out front, the best battle on the track was for the fifth spot as Maresca, Tim Fuller, Marc Johnson, Gary Tomkins, and Alan Johnson. The position was hotly contested lap after lap as the five-car pack swapped positions lap after lap. When the checkered flag flew, it was Sheppard claiming his 36th career Utica-Rome Speedway win with Varin, Mahaney, Ward, and Fuller completing the top five. Filling the remainder of the top 10 was Marc Johnson, Tomkins, Alan Johnson, Maresca, and Claude Hutchings Jr.

Jeff Taylor and Brent Joy led the Broedel Energy Sportsman field to the green flag to start their 20-lap feature event with Joy gaining the early advantage. As Joy was leading, 14th place starter Rocky Warner charging his way to the front as he used the high side on his way to the front. By lap four, Warner broke into top five, and by lap five, he was up to second. A caution on lap seven brought the field together, erasing the advantage Joy had over the field. The restart saw Warner grab the lead and never look back as he raced off to claim his fourth win of the season at Utica-Rome Speedway. Joy held on to claim second over Charlie Tibbitts, Matt Janczuk, and Kyle Kiehn.


Outside pole sitter Aaron Page led the opening two circuits of the 20-lap Gene Kotary Memorial for the Pro Stocks with Bill Knapp, Shane Henderson, and Mike Welch in tow. As lap three was completed, Henderson made his move to the front as he was scored the leader with Welch following him through to take the runner-up spot. For the next nine circuits, Welch ducked underneath the Henderson as he made a bid for the lead but Henderson was up to the task as he fended off every challenge. On lap 12, Welch was finally able to complete the pass as he was scored the leader on lap 13. Henderson kept pace with Welch, and in the closing laps as the duo reached slower traffic, Henderson was able to challenge Welch to retake the lead. In the final turn, Welch and Henderson split a slower car coming to the checkered flag with Henderson nipping Welch at the line for his first Utica-Rome Speedway win. Frank Hyatt, Knapp, and Jim Normoyle rounded out the top five.