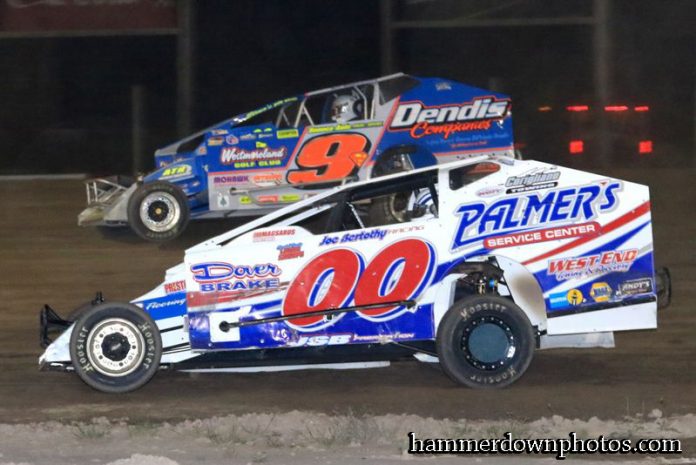 Danny Varin launched from his third starting spot to lead the opening circuit of the Gates-Cole Auto Insurance Modified 30-lap main event. The first of three cautions flew on lap three, and the restart saw the top five running cars of Mike Mahaney, Marc Johnson, and Jack Miller get together and spin which brought out the second caution. The next restart saw Varin again jump out to the lead and begin to pull away from the field.

As Varin led, it was Matt Sheppard that was making his weekly charge to the front after starting 14th. By lap 10, Sheppard was into the third spot and on the rear bumper of second place running Mike Maresca. For the next handful of laps, Sheppard threw move after move at Maresca to get by but Maresca was up to the challenge. Lap 15 saw Sheppard finally able to slip by Maresca for second as he set off after Varin. At this point, Varin had nearly a three second lead as he looked for his first Utica-Rome Speedway win of the year.

Lap 19 saw Varin’s great run come to an abrupt end as when he crossed the line as the leader, smoke billowed from the rear of his machine. Varin suddenly slowed and came to a stop in the backstretch with apparent motor failure which handed the lead to Sheppard. The final restart saw Sheppard easily run off to his fifth win of the season with Pat Ward, Maresca, Bobby Varin, and Tim Fuller filling out the top five positions. Rounding out the top 10 was Johnson, Rob Bellinger, Claude Hutchings Jr., Mahaney, and Brad Godshalk.

Jeremy Nestved and Mark Effner brought the Broedel Energy field the to the green flag with Effner grabbing the in a bid to collect his second career win. With Effner out front, the battle for the runner-up spot raged on between AJ Miller, Kyle Kiehn, AJ Filbeck, and Matt Janczuk. During the second half of the 20-lap feature, the battle for second narrowed to Kiehn, Janczuk, and Filbeck with Kiehn holding the edge. With five to go, the scoreboard showed Effner as the leader with Kiehn, Filbeck, Janczuk, and Chris Mackey chasing. At the point, Janczuk started to make his move as he took third from Filbeck on lap 16 and started working on Kiehn. Lap 18 saw Janczuk move into second and it seemed Effner had a comfortable lead at that point. With the white flag to signify one lap left, Janczuk drove in hard into turns one and two and was able to pull alongside Effner. The duo raced side by side down the backstretch for the final time and when they got into turn three, Janczuk again drove in deep and was able to slide in front of Effner. Janczuk then held off a final attempt by Effner to regain the lead as they raced out of turn to collect his first win of the season. Effner, Kiehn, Filbeck, and Mackey rounded out the top five.


Mike Kazlauskas led the opening lap to begin the 20-lap Pro Stock main event, with fifth place starter Jim Normoyle taking over to lead lap two. Normoyle would hold on to the lead for the next several circuits as point leader Mike Welch was making his way to the front from his ninth-place starting spot. On lap eight, Welch had worked his to the lead as he made the pass of Normoyle as the duo came out of turn four. Two laps later, Shane Henderson slipped by Normoyle and went looking for Welch. Unlike last week, Henderson was unable to pull off any late race heroics for the win as Welch dominated the remainder of the event. Henderson, Normoyle, Bill Knapp, and Frank Hyatt completed the top five positions.