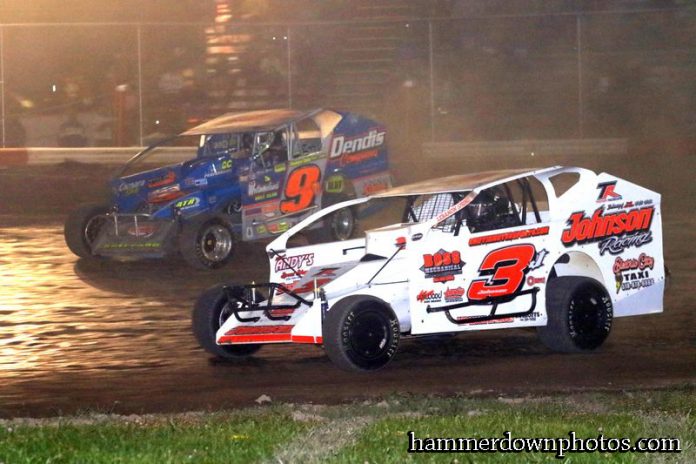 VERNON, NY – On a beautiful night for racing that saw dozens of kids receive free backpacks and school supplies from the Bobby Page Foundation, fans were treated to another thrilling night of racing on Parks Paving and Wilber-Duck Chevrolet night. Matt Sheppard led the last 30 feet of the Gates-Cole Auto Insurance Modified main event to collect his 38th career win while Dave Moyer was the victor in the Broedel Energy Sportsman. Mike Welch took home another Pro Stock trophy while Devin Willis was the winner in the Rookie Sportsman.

From his third starting spot, Brandon Walters took the initial lead of the Gates-Cole Auto Insurance Modified 30-lap feature. Marc Johnson, from his fifth starting spot, used the extreme bottom line to slip by Walters on lap three to be scored as the leader on lap four. After taking the lead, Johnson immediately began to distance himself from the field. By lap 10, Bobby Varin had taken over the second spot with Walters hanging on to third over Mike Maresca and 14th place starter Matt Sheppard.

As the laps clicked off in the non-stop event, Sheppard was picking his way through the top five one car at a time. Lap 12 saw Sheppard get by Maresca for fourth, and a circuit later, slip by Walters for third. As lap 17 was scored, Sheppard completed the pass of Varin to grab the second spot and set his sights on the leader Johnson, who had nearly a three second lead at this point. With 10 to go, it was Johnson leading Sheppard, Varin, Pat Ward, and Maresca.

Lapped traffic played a huge role during the last 10 circuits of the 30-lap main as Johnson struggled through traffic when they were running his preferred low line while Sheppard seemingly could put his car anywhere on the wide Vernon oval to pass the slower cars. On the last lap going into the final set of turns, Johnson dove underneath a lapped car while Sheppard jumped to the outside line, and as they race out of turn four it was a drag race to the checkered flag. Sheppard nipped Johnson at the line by a mere .162 seconds at the line for his fourth consecutive win, sixth overall in 2017. Johnson, Varin, Ward, and Tim Fuller filled out the top five spots while Maresca, Mike Mahaney, Claude Hutchings Jr., Alan Barker, and Walters completed the top 10.

Jeff Taylor and Jeremy Nestved led the Broedel Energy Sportsman field to the green flag to begin their 20-lap feature, with Nestved leading the first two circuits. Lap three saw AJ Miller take over the lead until a lap four caution changed the complexion of the event. Two consecutive restarts saw several of the top runners get together and stop, including leader Miller, AJ Filbeck, Brad Alger, Matt Janczuk, and Charlie Tibbitts, and several others, sending them to the rear. When things finally settled down, Dave Moyer was shown as the leader. For the remainder of the race, Moyer held off several challenges from Mark Effner to take his first-ever Broedel Energy Sportsman win. Effner, Chris Mackey, Brad Alger, and Janczuk rounded out the top five at the finish.


Jim Normoyle jumped out to the early lead from his third place starting and quickly started pulling away. With Normoyle a three-car battle for second raged on between Frank Hyatt, Shane Henderson, and Mike Welch with Hyatt holding the upper hand until the halfway point. Lap 10 saw Welch finally clear both Hyatt and Henderson and set his sights on Normoyle. On lap 15, Welch finally tracked down the rim riding Normoyle, and two laps later, Welch slipped underneath him for the lead. Welch would run off to his fifth win of the season over Normoyle, AJ Walters, Henderson, and Hyatt.

Devin Willis used his pole starting spot to get the jump on the field and drive off this his first Utica-Rome Speedway Rookie Sportsman win. Brad Williams, Chris Bonoffski, Keara Backus, and Rachael Zacharias chased Willis to the finish.

A huge night of racing is scheduled for this coming Sunday, August 20, with the annual Night of Legends featuring the Gates-Cole Auto Insurance Modifieds plus the King of Dirt 358-Modifieds, King of Dirt Sportsman, and King of Dirt Pro Stocks. The rain delayed King of Dirt Pro Stock main event from June 18 will kick off the night’s activities. Gates will open at 4:30 p.m. with racing starting at 7 p.m. For more information, please log on to www.uticaromespeedway.com or call the speedway office at (315)829-4557.