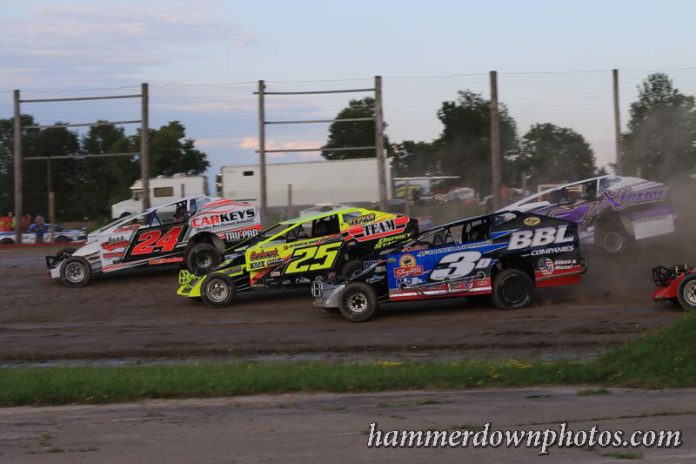 VERNON, NY – A huge show of racing is planned for this Sunday, August 20, at the Utica-Rome Speedway as the speedway honors its past with the annual Night of Legends. On tap is the always exciting Gates-Cole Auto Insurance Modifieds, but King of Dirt Series tripleheader. All three of the King of Dirt Series, the 358-Modifieds, Sportsman, and Pro Stocks, will be on hand plus the rain delayed King of Dirt Pro Stock main event from June 18 will be completed. Bernie Miller, Frank Mathalia, and Bill Henry, who were stars during the Utica-Rome Speedway asphalt era 1960’s and 70’s, are the drivers that will be honored as part of the Night of Legends festivities.

After a highly successful first visit back on July 9 that saw 43 cars sign in, the Elmo’s Speed Supply King of Dirt 358-Modified Series returns for a 35-lap affair that will pay $2,000 to win and $200 to start. Erick Rudolph outran the competition in July to grab his first ever Utica-Rome Speedway, but it is track regular Marc Johnson that is the current point leader. Jessey Mueller, Neil Stratton, Matt DeLorenzo, Allison Ricci, Demetrios Drellos, Jeremy Wilder, Jack Lehner, Michael Sabia, and Brian Gleason hold down the top 10 spots in the KoD standings and all are expected to be in attendance Sunday. Rudolph will return to defend his July win, and plans on doing double duty by competing in the Gates-Cole Auto Insurance Modifieds. Several UR regulars are also expected to hit a double payday by competing in both events. Drivers that wish to compete in two divisions are required to by a second pit pass.

The Lazzaro’s Auto Body Pro Stocks will compete in two 30-lap events, with the first being the rain delayed event from June 18. Each event will pay $700 to the victor and as is the case with every Pro Stock event at UR, it should be an action-packed affair. Mike Welch will lead the home track faithful against the invading drivers, along with Shane Henderson, Jim Normoyle, and more. Rob Yetman comes into Sunday’s event as the series point leader, ahead of Nick Stone, Kenny Martin Jr., Brandon Emigh, Jason Casey, Dan Older, Dave DePaulo, Kim Duell, Chuck Dumblewski, and Jason Meltz.


Adult grandstand admission for this big event is just $20 while kids 16 and under are free. Military, students, and seniors are $15. Pit admission is $27 for DIRTcar license holders and $30 without a license. Gates open at 4:30 p.m. with racing going off at 7 p.m.

Utica-Rome Speedway is located on Route just east of the village of Vernon, just minutes from the New York State Thruway. For more information on upcoming events and more, please log on to www.uticaromespeedway.com or call the speedway office at (315)829-4557. You can also follow us on Facebook and Twitter.