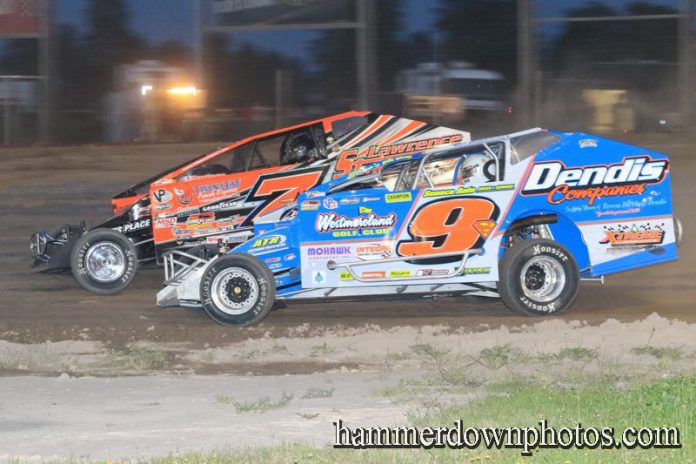 VERNON, NY – Matt Sheppard’s assault on the Utica-Rome Speedway record book continued this past Sunday evening, August 20, as he took his fifth consecutive win in the Gates-Cole Auto Insurance Modifieds, at the Vernon oval. Sheppard then scored his second win by taking the King of Dirt 358-Modified Series win, which was his 40th career win at Utica-Rome. Rocky Warner was winner in King of Dirt/DIRTcar East Sportsman Series while Rob Yetman took the win in the rain delayed King of Dirt Pro Stock Series event while Chuck Dumblewski was the victor in the regularly schedule King of Dirt Pro Stock race.

Steve Way and Randy Shantel led the Gates-Cole Auto Insurance Modified starting field the green flag but it was third place starter Brandon Walters who would lead the opening lap. Eighth place starter Tim Fuller made short work of the cars in front of him as he charged into second by lap three, and then went around the outside Walters to lead lap four. All eyes were on Matt Sheppard at this point, who started near the rear of the field after mechanical issues in his heat race. By lap seven, Sheppard cracked into the top five and he wasn’t done yet. On lap 10, the leaderboard showed Fuller leading over Walters, Danny Varin, Sheppard, and Claude Hutchings Jr.

A lap 11 caution erased the advantage that Fuller had built up on the field, and on the restart Fuller jumped out front again with Sheppard now making his move into the runner-up spot. Sheppard caught Fuller and the duo raced side by side for two laps but Sheppard was able to wrestle the lead away for good in lap 14. Sheppard was untouchable at this point as he sped away from the field, leaving Fuller in a battle for second with Pat Ward. Fuller and Ward would race side by side for second for the next five laps with Ward taking the spot on lap 18. Sheppard would go the rest of the way unchecked to score his seventh win of the season with Ward, Fuller, Erick Rudolph, and Danny Varin finishing in the top five spots. Positions six through ten were held down by Bobby Varin, Walters, Hutchings, Steve Way, and Jack Miller.

Erick Rudolph took the lead at the start of the King of Dirt 358-Modified 35-lap feature event, and after surviving a rash of yellow fever in the opening five laps only to lose the lead to fourth place starter Mike Mahaney on lap six. A lap nine red flag for a Jessey Mueller roll over, who amazingly drove away and returned to action, slowed the pace again. The restart gave Rudolph another shot at the lead, and as the field was coming to complete lap 10, Rudolph used a slide job to regain the lead over Mahaney. While this was going, Matt Sheppard was lurking in third waiting for any opportunity to get by. As the field was coming to lap 15, Mahaney jumped the cushion which allowed Sheppard to grab second and set his sights on the leader Rudolph.

Rudolph seemed to be in control of the event until he came up on lapped traffic where he struggled, allowing Sheppard to close in. Rudolph continued to be hindered by lapped traffic, and on lap 22 going to the backstretch, Sheppard made his move as he went on the outside of Rudolph and the slower cars. At the completion of lap 23, Sheppard was now out front. Sheppard was flawless for the remainder of the event as he raced off to his second win of the night over Rudolph, Marc Johnson, Mahaney, and Jeremy Wilder.


The King of Dirt/DIRTcar East Sportsman Series 30-lap main event saw Connor Cleveland take the initial lead from his pole starting spot, leading the first four circuits. Sixth place starter Rocky Warner was on the move early as he moved through the top five spots and by lap five, he went around Cleveland to assume the lead. Warner pulled away from the field while Kevin Root was after Cleveland for the runner-up spot and Root was able to take the spot away on lap nine. Several cautions eliminated any advantage that Warner was building up, but he was up to the task on each restart as he again left the field behind. When the checkered flag flew, it was Warner taking the $1,250 win over Root. Matt Janczuk, after starting 17th, came home in third over Dave Marcuccilli and Chad Edwards. Root was moved to end of the finish after failing post-race technical inspection.

Byron Westcott led the opening two circuits of the rain delayed King of Dirt Pro Stock main event from June 18, until seventh place starter Rob Yetman took over the lead as lap three was being completed. While Yetman was pacing the field, Luke Horning and Nick Stone were making their way to the front of the field with Horning taking second from Westcott on lap 10 after starting ninth. With Yetman comfortably out front, Stone was able slip by Horning for the runner-up spot to attempt to challenge for the win. Yetman proved to be too strong as he sped to the victory over Stone, Jason Casey, Horning, and Westcott.

The regularly scheduled King of Dirt Pro Stock 30-lap main event saw Gus Hollner lead the opening lap from his front row starting spot with sixth place starter Luke Horning taking over the lead on lap two. Horning would set the pace until lap 13 when Nick Stone would slip by. Stone would hold on to the lead for the next handful of laps until contact from Rob Yetman would send Stone around and Yetman to the rear for the contact. The restart saw Chuck Dumblewski assume the lead, which is he would not relinquish for the remainder of the event. Dumblewski would score his first ever Utica-Rome Speedway win over Horning, Mike Welch, Jon Routhier, and Byron Westcott.

Special thanks goes out to our friends from the New York State Stock Car Association, who posted additional money to the first NYSSCA members across the line in each of the regularly scheduled features.

Weekly racing continues next Sunday, August 27, when Excell Motorsports presents a full show of Gates-Cole Auto Insurance Modifieds, Broedel Energy Sportsman, Pro Stocks, and Rookie Sportsman. Gates open at 4:30 p.m. with racing at 7 p.m. For more information, log on to www.uticaromespeedway.com or call the speedway at (315) 829-4557.