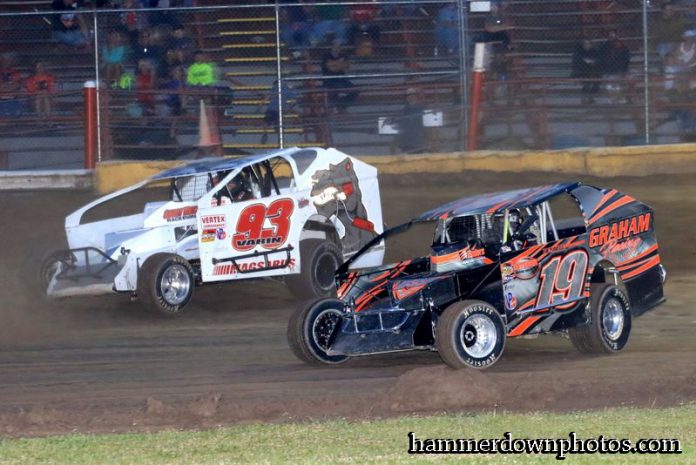 VERNON, NY – The 2017 season at Utica-Rome Speedway is rapidly coming to a close, with only two-point events left including this Sunday’s August 27 program, and the track championship picture should clear up after this Sunday. Excell Motorsports is set to present another fantastic program of high speed short track racing featuring the Gates-Cole Auto Insurance Modifieds, Broedel Energy Sportsman, Pro Stocks, and Rookie Sportsman.

When the 2017 campaign began back in April, Matt Sheppard was tied for fourth in all-time wins at the Utica-Rome Speedway with Todd Burley and Lou Lazzaro and just two victories away from surpassing NASCAR Hall of Famer Richie Evans. Most fans realized that Sheppard would probably pass both marks and move into sole possession of third place on the win chart, but almost no one gave much thought to him catching second place Dale Planck who is in second with 42 overall wins. Now, after collecting his 39th and 40th win this past Sunday and three Modified/358-Modified events left on the schedule, that has become a very possibility. Winner of six consecutive feature events, the question is now who and when will someone end his incredible streak. In recent weeks, Bobby Varin, Danny Varin, Marc Johnson, and Tim Fuller all held leads only to see the Waterloo NY native get by for the win. Pat Ward was the last driver to see victory lane in the Modifieds and that was back in early July. The point standings show Sheppard easily holding the lead over Ward, Bobby Varin, Tim Fuller, Marc Johnson, Claude Hutchings Jr., Danny Vain, Mike Mahaney, Mike Maresca, and Brandon Walters.

Matt Janczuk has put himself in position for his second consecutive Broedel Energy Sportsman title with consistent top five finishes all season long, including one win. Second place point man Chris Mackey is still within striking distance of Janczuk for the title, but he also has to be mindful of that AJ Filbeck is right behind him in third and looking to move up. Kyle Inman and AJ Miller right out the top five over Kyle Kiehn, Mark Effner, Dave Moyer, Brent Joy, and Charlie Tibbitts. An incredible 101 different drivers have signed for action in the Broedel Energy Sportsman this season.

Five-time winner in the Pro Stocks, Mike Welch, has set himself up for his first Utica-Rome Speedway as he leads the rankings over Shane Henderson, Jim Normoyle, Bill Knapp, and Frank Hyatt. The Pro Stock division remains on of the most exciting divisions to watch week in and week out.

The Rookie Sportsman class has shown steady growth in recent weeks, and a different winner has found victory lane in every event competed in so far. Drivers looking for seat time have used the division as a stepping stone into the Broedel Energy Sportsman.


Gates for this Sunday’s exciting event open at 4:30 p.m. with racing set to begin at 7 p.m. Adult grandstand admission is just $13 while children 16 and under are free.

Excell Motorsports, located in Hubbardsville NY, is the premier motorsports dealer for Central New York as an authorized dealer for Yamaha, Polaris, Mototrax, Bobcat, and Hustler. With new and used items in their inventory, they will impress the first-time buyer or the seasoned buyer, and have financing options available. For more information on the services they offer, log on to www.excellmotorsports.com.

Utica-Rome Speedway is located on Route 5 in Vernon, NY and is just minutes from the New York State Thruway. Complete information including full point standings, the remaining 2017 schedule, and more is available at www.uticaromespeedway.com. The speedway office can be contacted by calling (315) 829-4557.