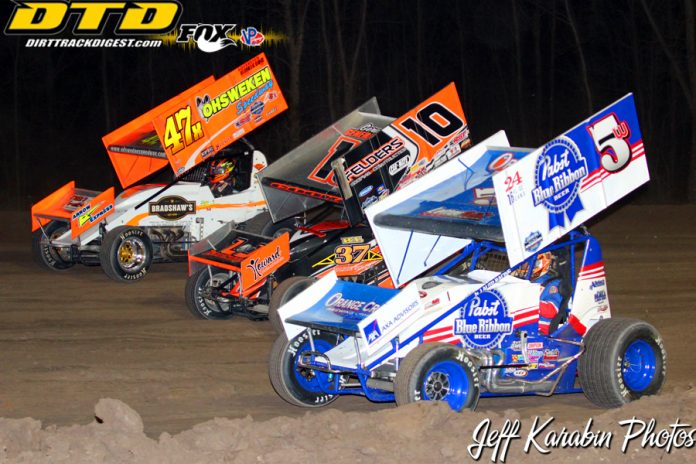 VERNON, NY – There are few nights during the season that bring as much excitement to an event than the final night of points, a night where a season’s worth of work comes to fruition for a select few drivers. This Sunday evening, September 3, is the night where the 2017 track champions in the Gates-Cole Auto Insurance Modifieds, Broedel Energy Sportsman, and DIRTcar Pro Stocks. Also in competition will be the always thrilling Lucas Oil Empire Super Sprints, guaranteeing another exciting night at the Utica-Rome Speedway. Our friends from Broedel Energy will present the huge night of racing.

A five-consecutive win streak (six with a 358-Modified victory) by Matt Sheppard ended all drama for the Gates-Cole Auto Insurance Modified title as Sheppard clinches the title outward by simply pulling in the gate. Now the focus will be, will Sheppard start another win streak this Sunday, or will someone step up like a visiting Larry Wight to ensure Sheppard will not take another 2017 win at Utica-Rome Speedway. While Sheppard basically sewn up the 2017 Modified title, there several top 10 positions up for grabs. Pat Ward sits in second points over Bobby Varin, Tim Fuller, Marc Johnson, Danny Varin, Claude Hutchings Jr., Mike Mahaney, Mike Maresca, and Brandon Walters.

When the 2017 season started, Broedel Energy Sportsman point leader Matt Janczuk had no plans on competing weekly at the Utica-Rome Speedway and defending his track title from last season, but with one week left he is on the cusp of claiming his second consecutive title. Chris Mackey has kept pace most of the season as he currently sits in second, but Janczuk’s 10 top five finishes to Mackey’s five will most carry Janczuk to the title. AJ Filbeck, Kyle Inman, and AJ Miller round out the top five while Kyle Kiehn, Mark Effner, Dave Moyer, Brent Joy, and Charlie Tibbitts fill out the remaining top 10 spots.

Like Matt Sheppard and Matt Janczuk, Mike Welch just needs to show up to guarantee his first ever Utica-Rome Speedway championship in the DIRTcar Pro Stocks. Welch has had a spectacular season so far, grabbing five wins this season along with 10 top 10 finishes. Second place point man Shane Henderson has shown the ability to keep up with Welch on most nights but could not match the consistent finishes. Jim Normoyle, Bill Knapp, Frank Hyatt, Aaron Page, Ernie Staelens, Jerry Streeter, Mike Kazlauskas, and AJ Walters make up the rest of the top 10 spots.

The Rookie Sportsman have grown in numbers in recent weeks, and so far, there has been a different winner every week they have been in action. Joe Abbass, Tom Juno, Jimmy Moyer, Devin Willis, and Travis Billington have all visited victory lane so, will it be another new winner this week?


An impressive field of Lucas Oil Empire Super Sprints is expected this Sunday for their annual Labor Day Weekend assault on the Vernon oval. Some of the best 360 Sprint drivers in the region will be on hand including Jason Barney, Paul Kinney, Paulie Colagiovanni, Matt Tanner, Matt Billings, Jeff Cook, Steve Poirier, Danny Varin, Jonathan Preston, Chad Miller, Brett Wright, Shawn Donath, Dave Axton, and many more are expected, along with the father and daughter duo of Chuck and Kelly Hebing. Whenever ESS comes to the Utica-Rome Speedway, it is edge of your seat excitement as the winged warriors never disappoint. For more information on the Lucas Oil Empire Super Sprints, log on to www.empiresupersprints.com or visit them on Facebook and Twitter.

With all the racing action planned and the earlier sunset, Utica-Rome Speedway will start racing at 6 p.m. this Sunday.  Gates will open at 3:30 p.m.

Since 2001, the Hubbardsville NY based Broedel Energy has been providing delivery of Propane Gas, Fuel Oil, Kerosene, Diesel Fuel, and Gasoline homes, farms, and businesses in the communities of Madison, Oneida, Chenango, and parts of Herkimer, Onondaga, and Otsego counties. In addition to these services, Broedel Energy is now offering Heating & Air Conditioning Sales, Service, and Installation. As a family owned company, Broedel Energy prides themselves in offering exceptional customer service, timely deliveries, and affordable pricing. For more information about Broedel Energy, you call (315)691-2323 or go online at www.broedelenergy.com. They also have a social media presence at www.facebook.com/Broedel-Energy-LLC.

Utica-Rome Speedway is located just minutes from the New York State Thruway on Route 5 in Vernon, NY. For complete information including full point standings, the remaining 2017 schedule, and more, please visit us at www.uticaromespeedway.com or call the speedway office at (315) 829-4557. We also active on social media via Facebook and Twitter.