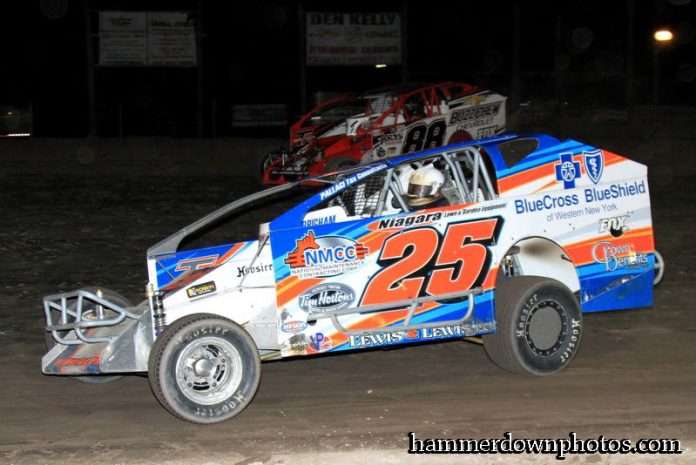 VERNON, NY – After much discussion and deliberation the Utica-Rome Speedway is going back to the past to help improve the future. Bill and Kim Shea at the Utica-Rome have decided it’s time to make a change to the weekly headline division at the speedway for 2018 at beyond.

In conjunction with the move by John Wight at the Fulton Speedway, Utica-Rome Speedway’s headline division next season will be the DIRTcar 358-Modfieds. The two facilities have a long history of sanctioning weekly racing for the small-block Modifieds and in 2018 they will return as the headline division at both facilities.

Utica-Rome Speedway was a DIRTcar 358-Modified sanctioned facility in 1986, then again from 1999 until 2004 before opening the division up for big-blocks to compete. Todd Burley holds the most wins in the DIRTcar 358-Modified division with 18 career. Stewart Friesen was the final track champion in 2004.

This decision was made over the past several months as track promoters John Wight (Fulton) and the Sheas looked at the rising cost for teams to field a competitive big-block Modified as well as the ever expanding Sportsman division. The Modified division has grown stagnant as the cost to operate a competitive team has grown too much for the average racer. After their talks, it was determined that it was time for a change in Central New York.

“I’ve owned cars and the difference between owning a competitive big-block and small-block is staggering,” said Shea. “The big-blocks are just getting too expensive. We think the switch to small-blocks will help save teams some money and also bring in some new blood to the division. We’ve seen car counts throughout Central New York drop because guys just can’t afford it anymore. We hope this will help bring them back.”


Since the inception of the crate engine in the Sportsman ranks, the car counts have grown leaps and bounds. Unfortunately the cost between running a competitive Sportsman car and a big-block Modified is staggering. As a result teams are forced to race what they can afford. This move opens the door for more teams to make the move up as the financial commitment isn’t nearly as much.

“We’ve had nearly 100 different Sportsman teams compete with us at Utica-Rome this year,” mentioned Shea. “There are several teams that want to make the jump up to the Modifieds but they simple can’t do it because of the economics. By switching to the small-blocks we are giving them an opportunity to move up and be competitive.”

The 358-Modified competed twice at Utica-Rome so far this season with solid car counts for both outings. Erick Rudolph picked up a victory in July while Matt Sheppard outdueled Rudolph in traffic to win the second appearance in August.

The DIRTcar 358-Modified series returns to the track for the first time in 13 years on Tuesday, October 3, as the kick off to Super DIRT Week XLVI. Race time for that event is scheduled for 7pm. The Cole Cup for the 360 Sprints cars as well as the DIRTcar Sportsman are also on the card.

For more information on the remaining season schedule and more please visit our website at www.uticaromespeedway.com. More information is available by calling the speedway office at (315) 829-4557 or by following us on Facebook at Utica Rome Speedway or on Twitter @UR_Speedway.