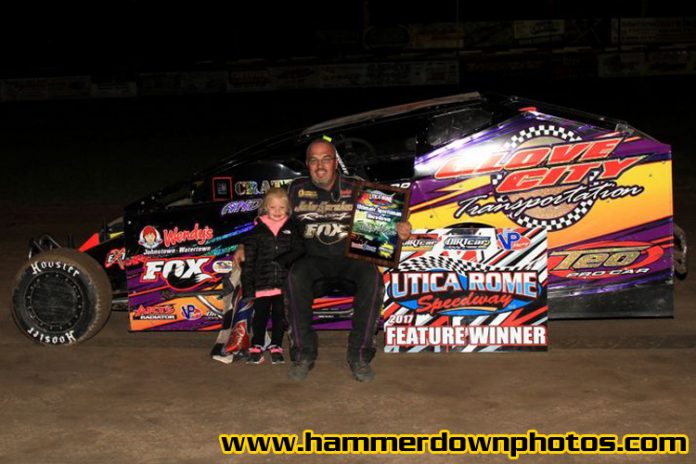 VERNON, NY – It came down to a race between two of the best in the Sportsman division on Sunday night at the Utica-Rome Speedway in the first ever Ultimate Sportsman Showdown. Rocky Warner and Dave Marcuccilli battled during the 50-lap feature with Warner coming out on top and taking the winner’s share of $5,000.

“This is pretty darn good,” said Warner after a roof dance in victory lane. “I got to thank the sponsors that put the money up. I hope we put on a show for the fans. Dave (Marcuccilli) and I were so close the last few laps racing real nice and clean. That was exciting.”

Warner, of Gloversville, N.Y., drew the pole position for the start of the star-studded Broedel Energy Sportsman feature which was run with support from Donath MotorWorx, Fastline Performance/FOX Shocks and Extreme Performance and contingency prizes from Beyea Custom Headers. He raced out to the lead at the green over outside pole starter A.J. Filbeck.

Warner remained in front with dicing for position going on behind him. Filbeck tussled with Scott Duell and eventual runner-up finisher Marcucilli. The trio worked each other over with Duell ending up second before five laps were complete.

The first of two cautions came on lap six as David Shilling clipped an implement tire on the bottom of turns one and two. He spun with several other cars involved including Zach Sabotka, Kyle Kiehn, Corey Barker and Jeff Taylor. Kiehn and Taylor were the only two drivers unable to continue.


Warner won the race off of four at the green beating Duell to the first corner. Duell now had to fight off Marcuccilli for the second spot. Marcuccilli tormented Duell before finally taking second on lap 11. All the while Warner continued to keep a solid advantage over the field.

Laps clicked northward as Marcuccilli tried to track down the race leader Warner. Warner worked the top lane on the speedway with Marcuccilli making some progress at cutting into his lead by working the middle groove. They remained easily in front as Duell ran third.

The only other yellow was necessary on lap 18 as Sabotka had problems causing him to spin in the fourth corner. This put the two heavyweights on the front row. Like they’d done the whole race up to this point, Warner and Marcuccilli moved away from the field with Duell watching from third.

At the halfway point it was Warner leading Marcuccilli while Duell was busy waging a war with 13th starting Connor Cleveland. Cleveland worked and worked as he tried to take the third position away from Duell. He eventually got the spot on lap 35.

As the same moment as the pass for third occurred, Warner and Marcuccilli were working into traffic for the first time in the event. Marcuccilli closed up to Warner’s back bumper. Warner bobbled on the top of turns three and four allowing Marcuccilli to take the lead on lap 37.

Warner regrouped the following circuit and pulled even with Marcuccilli on the back straightaway. They stayed side-by-side through turns three and four. As they exited the corner Warner made a three-wide move to get by a slower car to jump back in front of Marcuccilli at the line.

“I hate starting on the pole,” commented Warner. “I like starting fourth, fifth, sixth or somewhere like that. You get to feel the race track out and see what’s out there left for us. I thought I had a good line going. I think the last ten laps I used every inch of this race track to block off Dave.”

Warner did lead the final 12 laps of the race to pick up the feature victory with Marcuccilli finishing in second. Marcuccilli, of Cayuga, N.Y., gave it all he had but just couldn’t find the right line to keep Warner behind him.

“I’m happy with it,” mentioned Marcuccilli. “I stayed on the same straightaway with him. I was able to move around as he was the leader. I think I was a little better than he was. Once we got into lapped traffic I thought I was going to be okay. That then lapped car kind of pinched me down. I’m happy. The car was really good.”

Cleveland was the fastest car at the conclusion of the event. Unfortunately he hit a yuke tire late in the race bending up his front end. Had he not had the issue he may have had something for the top two.

“It was a few laps to go when I hit the tire and nocked the left front out,” stated Cleveland. “I thought I was going to be able to be up there and battle for the win, but third is better than it could have been.”

Duell held on to finish a strong fourth while Todd Root completed the top five.

Eight heat races were run with Warner, Filbeck, Duell, Jackson Gill, Marcuccilli, Tim Schneider, Kevin Root and Todd Root earning the wins. James Friesen was the winner of the B-Main, JaMike Sowle took the C-Main while Tyler Thompson scored the D-Main win for the 68 cars that attempted to qualify for the 24-car starting field.

Up next at the speedway the DIRTcar 358-Modified series returns for the first time in 13 years on Tuesday, October 3, as the kick off to Super DIRT Week XLVI. Race time for that event is scheduled for 7pm. The Cole Cup for the 360 Sprints is also on the schedule as well the Broedel Energy DIRTcar Sportsman.

For more information on the remaining season schedule and more please visit our website at www.uticaromespeedway.com. More information is available by calling the speedway office at (315) 829-4557 or by following us on Facebook at Utica Rome Speedway or on Twitter @UR_Speedway.