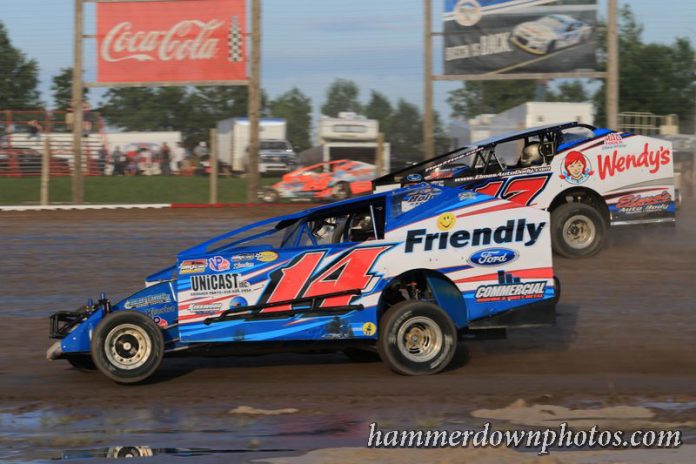 VERNON, NY – Coming up this Tuesday, October 3, is the final on track event of the season for the popular Vernon oval as it kicks off Super DIRT Week with some Tuesday Night Thunder action. A $4,000 to win 100-lap 358-Modified Super DIRTcar Series event, the $3,000 to win Cole Cup for the 360 Sprints, and a $1,000 to win Broedel Energy DIRTcar Sportsman main event will serve as a huge pre-game event to get things rolling for Super DIRT Week.

A total of 11 358-Modified Super DIRTcar Series events have been held at the Utica-Rome Speedway with Alan Johnson claiming the victory in the most recent one on August 26, 2004. A huge field is expected this Tuesday in pursuit of the $4,000 win, with drivers from all over the Northeast and Canada invading the Vernon oval.

Joining the talented field will be a strong contingent of local and weekly track regulars, led by 2017 Utica-Rome Speedway Gates-Cole Auto Insurance Modified champion Matt Sheppard in the Sweeteners Plus numbered 92s. Joining Sheppard will be Gypsum Express teammates Larry Wight and Pat Ward, Marc Johnson, Robby Bellinger, Mike Maresca, Tim Fuller, Alan Johnson, Ryan Arbuthnot, with Billy Whittaker and Bobby Varin also showing interest. The list of drivers goes on and it be a hotly contested 100 lap main event, potentially being the most exciting event of the season.

In the past two seasons when the 360 Sprints have competed at Utica-Rome Speedway to kick off Super DIRT Week, the combination of cooler temperatures and earlier sunset have led to some blistering lap times for the winged Sprints along with some intense racing action. Former World of Outlaw and current Pennsylvania Posse driver Lucas Wolfe scored the win in this event last season and is expected to be on hand Tuesday to defend his win.


This year’s event will be the 2017 Cole Cup, paying $3,000 to the winner of the 25-lap A-Main, should again attract many of the top drivers in the region. Many of the Lucas Oil Empire Super Sprint stars including 2017 ESS champion Jason Barney, Matt Tanner, Paul Kinney, Matt Billings, Jeff Cook, Coleman Gulick, Danny Varin and Bobby Varin, Jonathan Preston, Chad Miller, Brett Wright, Shawn Donath, Chuck and Kelly Hebing, and Dave Axton are just some of the names you could expect this Tuesday. The Cole Cup, an annual event for the 360 Sprints, pays homage to previous track owner Gene Cole who played a pivotal role in strengthening 360 Sprint racing in Central New York with multiple annual events held at the track each season.

The Broedel Energy DIRTcar Sportsman round out the exciting three division show as they will chase a $1,000 payday in a 25-lap main event. Sportsman competitors from around the region will take on 2017 Utica-Rome Speedway Broedel Energy Sportsman champion Matt Janczuk and Sportsman kingpin, and soon to be Modified driver, Rocky Warner. As they did on a weekly basis in 2017, the Sportsman should put on another thrilling main event to compliment the rest of the evening’s racing action.

Pit gates will open at 4 p.m. on Tuesday, with grandstands opening at 4:30 p.m. Heat races are scheduled to begin at 7 p.m.

Adult grandstand admission for this huge show is $30 with Seniors, Military, and Students admitted for $27. Pit admission is $35 for DIRTcar members and $40 without a license. Kids 16 and under are just five dollars.

Utica-Rome Speedway is located on Route 5, just west of the village of Vernon and just minutes from the New York State Thruway. For more information, please visit us at www.uticaromespeedway.com or on Facebook and Twitter. The speedway office can be contacted by calling (315) 829-4557.