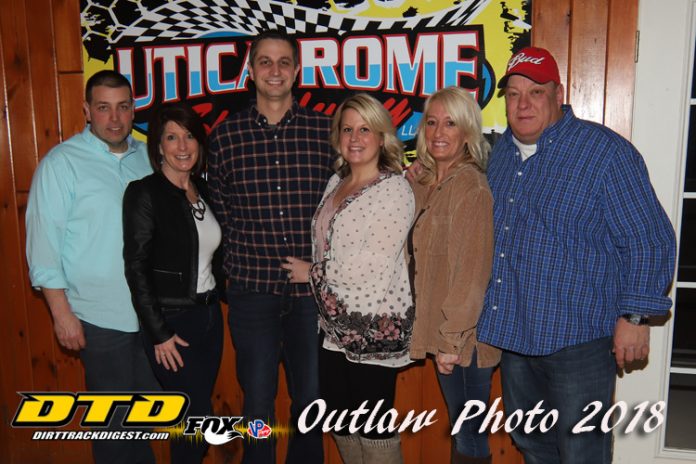 VERNON, NY- This past Saturday evening, February 3, Utica-Rome Speedway hosted an Awards Celebration to recognize the accomplishments of its top drivers from the 2017 season. The casual event, held for the first time ever in the cozy confines of the Utica-Rome Speedway Club, was well received from the patrons who attended.

Matt Sheppard was honored as the 2017 Gates-Cole Auto Insurance Modifieds after another dominating season that saw the Waterloo native win an astounding 70 percent of the weekly events. Sheppard took seven out of 10 weekly events and also added a win in an unfamiliar ride to win a King of Dirt 358-Modified event last August. It was Sheppard’s third consecutive Utica-Rome Speedway championship and fourth overall. Pat Ward, winner of one event, finished runner-up to Sheppard in the standings followed by Bobby Varin, Tim Fuller, Marc Johnson, Danny Varin, Claude Hutchings Jr., Mike Mahaney, Mike Maresca, and Brandon Walters. Hutchings was also recognized as the Modified Rookie of the Year.

In the Broedel Energy DIRTcar Sportsman, consistency was again the key factor as Matt Janczuk defended his 2016 title by taking the taking the 2017 crown. Janczuk found victory lane just once but finished in the top five 10 out of the 12 races competed in the ultra-competitive division. It was Janczuk’s second title in the 602 Sportsman and fifth overall Utica-Rome Speedway track championship. Chris Mackey, AJ Filbeck, Kyle Inman, AJ Miller, Kyle Kiehn, Mark Effner, Dave Moyer, Brent Joy, and Charlie Tibbitts were also honored for their top 10 finish in the standings. Inman was the recipient of the division’s Newcomer of the Year award while Miller was honored as the division’s Rookie of the Year.

After several seasons of just coming short of taking the Utica-Rome Speedway Pro Stock title, Mike Welch left little doubt on who would be the 2017 titlist after dominating much of the season. Welch completed the season with five wins in 11 events and finishing in the top 10 in all events competed. It was his first ever Utica-Rome Speedway championship. Shane Henderson, Jim Normoyle, Bill Knapp, Frank Hyatt, Aaron Page, Ernie Staelens, Jerry Streeter, Mike Kazlauskas, and Andrew Walters were also honored for their top 10 efforts. Henderson was given the Newcomer of the Year award for the Pro Stocks.

After the award ceremony, track owner Bill Shea addressed the attendees where he thanked them all for their support and letting them know they are a big reason for their success. He also informed them of the new clay that has been laid down on the track right after the season ended. He ended by giving some insight on the upcoming season and many of the exciting events that are planned including the return of Tony Stewart’s All Star Circuit of Champions 410 Sprint Series, motocross events, a potential tractor pull, and more


Look for more details on the 2018 season in the very near future as the schedule is in its final stages. For all the latest news, please visit us at www.uticaromespeedway.com or follow us on Facebook and Twitter. The speedway office can also be contacted by calling (315)829-4557.