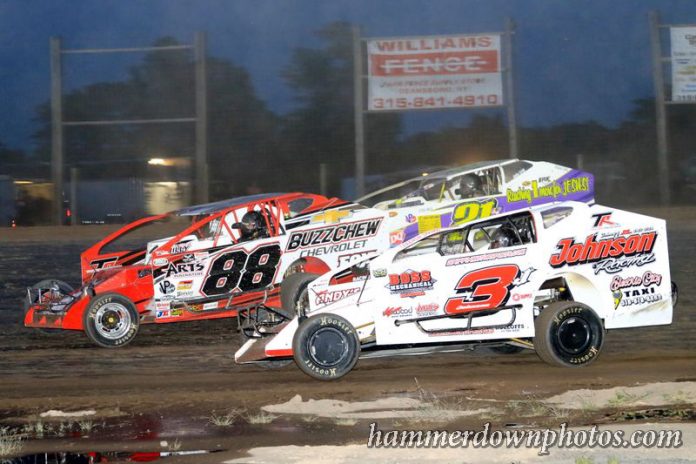 VERNON, NY – With racing recently starting in Florida, preparations are now in full swing at Utica-Rome Speedway for the upcoming 2018 season. After the late season announcement last year that the weekly headline division, the DIRTcar Big Block Modifieds, would be replaced the by the DIRTcar 358-Modifieds, interest has been high from both competitors and fans. The remainder of the weekly divisions will remain the same with the Broedel Energy DIRTcar Sportsman, Ted’s Auto Body DIRTcar Pro Stocks and Rookie Sportsman as part of the PICK-4 Sunday night program.

The month of May starts with a PICK-4 show sponsored by Wilber Duck Chevrolet on Sunday, May 6. The PICK-4 program is new to Utica-Rome in 2018 as every event labeled PICK-4 will see special giveaways for fans. For each PICK-4 program all fans will be entered to win free tickets, cash prizes, food vouchers and much, much more. All fans need to do to have an opportunity to win a prize is purchase an admission ticket to the night’s racing program.

June kicks off with a King of Dirt Triple header as the 358-Modifieds will compete in the Victoria, $2,000 to win main event along with $1,000 feature for the King of Dirt Sportsman plus a $600 to win main for the King of Dirt Pro Stocks. The Rookie Sportsman will again be in action on this huge night. After a week off for FrogFest on June 9, action resumes on June 17 when the DIRTcar Sportsman Series is in action for their $1,000 to win event along with the DIRTcar 358-Modifieds, Ted’s Auto Body DIRTcar Pro Stocks and Rookie Sportsman. The month of June is closed out with a PICK-4 program on June 24 presented by Community Car Wash and Wilber Duck Chevrolet.

The final full month of racing at Utica-Rome starts off in a big way Sunday August 5 as Jeremie Corcoran brings his Jan Corcoran Memorial, in honor of his late mother, to Utica-Rome Speedway as part of the Northeast Racing Productions and Power Seal Night of Legends program. The event will feature a $3,064 to win 50 lap Big Block/Small Block Shootout with a $640 bonus going to the first small-block across the line. The Dirt Modified Nostalgia Vintage Series, Broedel Energy DIRTcar Sportsman (for $640 to win, $64 to start), Ted’s Auto Body DIRTcar Pro Stocks and Rookie Sportsman are also be on hand. The following Sunday, August 12, is Excell Motorsports Kid’s Night featuring the annual Bobby Page Foundation Backpack Giveaway plus Big Wheel races, bike giveaways and more, joining a PICK-4 show. A special Friday night event is slated for August 17 when Tony Stewart’s Arctic Cat All-Star Circuit of Champions Series for the ultra-fast 410 Sprints returns the Vernon oval for the third time. Fred Rahmer and Tim Schaffer won the previous two events. The 358-Modifieds will also be in action in an open draw non-point event paying $2,000 to the winner. Sunday, August 26, closes out the month with a PICK-4 show presented by Wilber Duck Chevrolet.

The final Sunday night event of the season on the half-mile oval is on September 2 when the Lucas Oil Empire Super Sprints return, joining the DIRTcar 358-Modifieds, Broedel Energy DIRTcar Sportsman, Ted’s Auto Body DIRTcar Pro Stocks and Rookie Sportsman in the final night of points. The 2018 track champions will be crowned in the Labor Day Weekend spectacular sponsored by Broedel Energy.

All the action will not be limited to the dirt oval in 2018 as AMA Motocross will be in action on the new motocross track on August 19, September 16, and October 22 with several practices also planned. The New York Hot Farm Tractor Pull Series is scheduled for Saturday July 28 and the Shootout Productions Inc. Truck Pulling Series returns on Friday August 24 with help from Clinton Tractor. On September 29, the 315 Truck Meet is also planned. Two appearances by the Kenny Wallace Driving Experience are scheduled for June 16 and September 22. The annual B104.7 FrogFest Country Music Festival returns on June 9.

The full and detailed schedule will be released soon and will be available at www.uticaromespeedway.com. You can also follow us on Facebook and Twitter for more information.