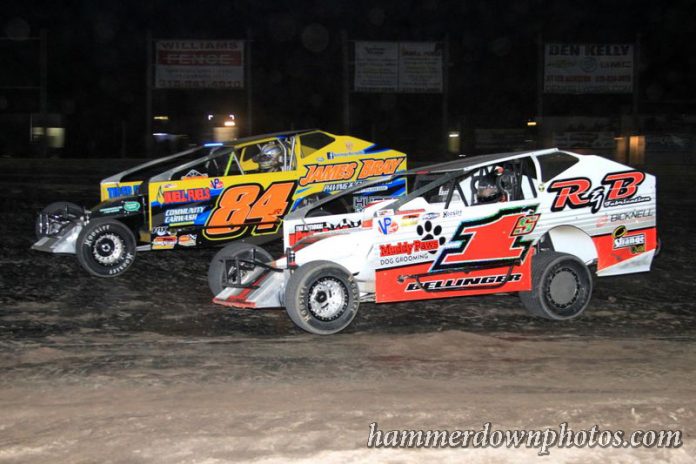 VERNON, NY – Mother Nature’s wintery grip just doesn’t seem to want to let go this year forcing the Utica-Rome Speedway to postpone the practice scheduled for Sunday, April 15. As a result, the speedway has canceled the practice session for that evening and hopes to reschedule a practice for this coming week dependent on Mother Nature.

The chase for the $5,000 title begins on Sunday, April 22 as Budweiser presents the Chill Factor 50 for the DIRTcar 358-Modifieds. It is the first full-point event of the 2018 season at the track and offers $3,000 to the winner of the 50-lap affair. The format will include a draw for heat starting positions as well as a redraw for starting spots at the front of the field. Joining the DIRTcar 358-Modifieds on the schedule that night and kicking off their point chase are the Broedel Energy DIRTcar Sportsman who are competing for $1,000 to win along with the Ted’s Body Shop Pro Stocks. The Rookie Sportsman division is also set to compete that night.

With the change to the DIRTcar 358-Modified division as the headline class, the chase for the 2018 championship is wide open. The multi-time and defending track champion Matt Sheppard has not committed to weekly racing at the facility meaning it’s possible that new champion will be crowned and take home the $5,000 top prize with the top ten in points sharing in a nearly $20,000 overall point fund for the division. It is set to be one of the strongest 358-Modified point funds in the Northeast.

The Chill Factor 50 is scheduled for April 22 with racing action set to get underway promptly at 6pm with grandstand gates opening at 3:30pm. Tickets for the grandstands are just $18 while it’s $15 for Seniors/Students/Military and kids under the age of 16 are free.