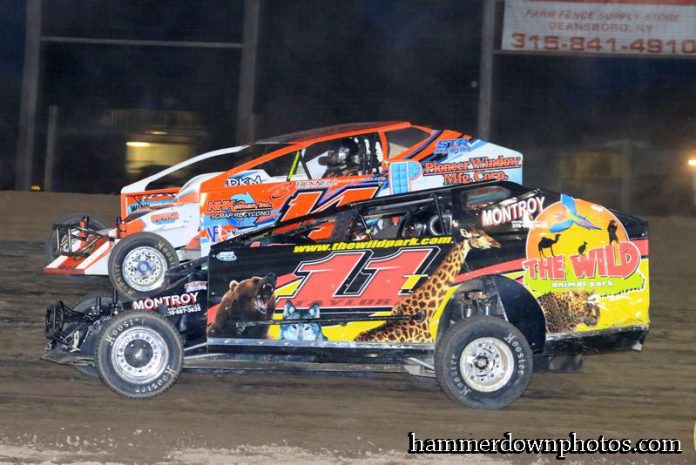 VERNON, NY – It may be hard to believe but it seems like spring has finally sprung in Central New York which is some good news for the management at the Utica-Rome Speedway.  With the sunshine over the weekend track crews were finally able to get out on the racing surface in preparation for the season opener.

After working tirelessly on the surface over the course of this past weekend the speedway is finally ready for some racing action.  As a result, speedway officials have added a practice session for this Thursday, April 26 from 6 to 9 p.m.  Pit admission is just $20 while spectators can get into the grandstands for free. Gates open at 4:30 p.m.

“It was finally nice to see some sunshine,” stated track owner Bill Shea.  “With the beautiful weather we had all weekend long that allowed us to get out on the track and get it ready to go.  All we needed was some sunshine and warmer temperatures and we finally got it.”

Following Thursday’s schedule practice three days later the Utica-Rome Speedway officially kicks off the 2018 schedule with the running of the DIRTcar 358-Modifieds, Broedel Energy DIRTcar Sportsman, Rookie Sportsman and the first stop for the DIRTcar Pro Stock Series paying $1,000 to the winner.  Pro Stock drivers from all over the Northeast are expected including several invaders from Canada.

The April 29 program is presented by Budweiser and VP Racing Fuels.  It is the first point carrying event of the season meaning the chase for the $5,000 Modified track title begins with our first 30-lap feature of the season.  The total point fund for the DIRTcar 358-Modifieds approaches $20,000 for the season.  The Broedel Energy DIRTcar Sportsman title will pay a nice $1,000 to the champion.


On May 6, the speedway offers the first PICK 4 program of the season.  The PICK 4 concept is new for 2018.  On nights that are deemed a PICK 4 show on the schedule all fans in stands will have chances to win prizes throughout the racing program.  Prizes include, but are not limited to, free passes for future shows, food vouchers for the concession stands, Utica-Rome Speedway gear and much more.  Utica-Rome Speedway appreciates those that support the track on a regular basis and the speedway is hoping to add some more family fun to the racing program with fan giveaways.  The Davidson Chevrolet, Buick and GMC Kid’s Club is back as well.  This ensures a continuation of the Kid’s Club bike giveaway at nearly every scheduled event.

Fans should be sure to mark Mother’s Day, May 13 on their calendars as the DIRTcar 358-Modified Series returns for the first of two spots on the schedule.  The New York 100 will bring drivers from every corner of The Northeast as they hope to walk away with the $4,000 top prize for winning the 100-lap event.

Racing on April 29 will get underway promptly at 6 p.m. with grandstand gates opening at 3:30 p.m. Tickets for the grandstands are just $13 while it’s $10 for Seniors/Students/Military and kids under the age of 16 are free.