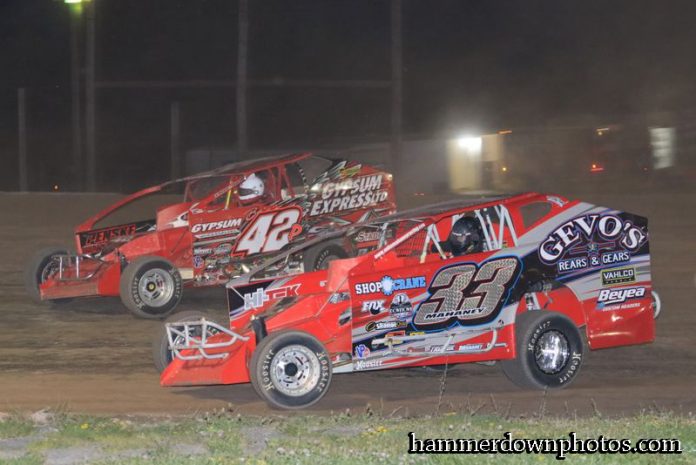 VERNON, NY – Although it eventually rained later in the afternoon on Sunday at the Utica-Rome Speedway, cars were finally able to hit the track to turn laps on the new surface. Eventually a couple of rough spots developed late in the practice session, the track overall held up well for the nearly 30 cars that showed up to take to the half-mile oval.

Track crews now plan to take advantage of forecasted sunny weather early in the week to get the track surface into shape and ready for next week’s season opener on Mother’s Day, May 13.

“We really have to thank everyone that came out on Sunday to shake down their cars,” stated speedway promoter Bill Shea. “We wanted to get some laps on the track and with their help we were able to do that. The track did just what we expected. We had a couple of spots that need our attention but we are confident that we are going to have a great track for next weekend’s opener.”

The DirtTrackDigest.com DIRTcar 358-Modified division was well represented by four drivers shaking down their cars for next week’s opener. Former Utica-Rome Speedway Sportsman champion Rocky Warner was the fastest of the afternoon for the 358-Modifieds with a lap of 19.220 with his Jake Spraker owner No. 1j. Bobby Varin, driving the Alton and Carole Palmer owned No. 76, also hit the track for numerous sessions. Former Open Sportsman champion Jack Miller was on hand along with Claude Hutchings Jr.

These four drivers will be joined next Sunday, May 13 by a host of invaders from all over the Northeast as the DIRTcar 358-Modified series kicks off at Utica-Rome Speedway with the running of the $4,000 to win New Yorker 100 as part of the 57th season opener for the track.


The event is the 12th DIRTcar 358-Modified Series event in the history of the speedway. The last time the series visited Mat Williamson made a stunning drive in the second half of the race to steal the victory late from Stewart Friesen and Matt Sheppard. Danny Johnson and Brett Hearn are tied for the most small-block series wins at the speedway with four apiece.

Besides being the kickoff for the DIRTcar 358-Modified Series, it is also the first full point event for the DirtTrackDigest.com DIRTcar 358-Modifieds. At the end of the season the highest point man will walk away with a $5,000 payday for the championship with everyone in top 10 sharing in the nearly $20,000 point fund which is one of the best for 358-Modifieds in the Northeast.

Gates for the exciting May 13 program will open at 3 p.m. with racing slated for 6 p.m. Adult admission will be $22 while student, senior, and military admission set at $18. Kids under the age of 16 are free.