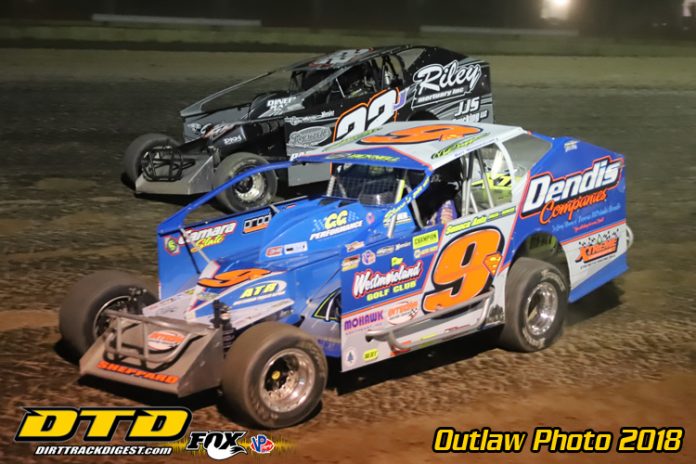 VERNON, NY – Utica-Rome Speedway opened up their new 358 Modified era with the New Yorker 100, and a familiar face in May Sheppard claimed the win. How he got the 100-lap win in the DirtTrackDigest.com 358 Modified feature is worth a novel.

The win was Sheppard’s 41st at the Vernon oval, and quite possibly his closest.

2017 big-block Modifed track champion Sheppard started the new year right where he left off, grabbing the lead at the start of the New Yorker 100. Early on, was obvious the change in motors at Utica-Rome slowed down Sheppard none, as he opened up a large lead over Jeremy Wilder the opening ten or so laps.


Jimmy Cotrell slowed the pace on lap 16, stopping at the top of turn one and bringing the field back to Sheppard. The field stayed with Sheppard briefly, and in a big way, as Wilder was able to nose out in front for a split second on the restart. Tim Fuller did the same the next lap, however, Sheppard turned away both challengers and kept the lead. A quarter of the way in, Sheppard’s lead had been reestablished at two seconds over Fuller.

Before too long, Wilder was back pressuring Fuller for second, taking the spot on lap 33 right as Lance Willix blew a right rear tire and drew a yellow. Wilder couldn’t challenge like he did on the restart before, but he still hung close. Behind them, Larry Wight slid around Tim Fuller for third.

Sheppard’s lead had stabilized around two seconds at halfway, but it was then when leaders reached lapped traffic. Sheppard’s lead began fluctuating, being chopped to about a second at times before being extended to about three quarters of a straightaway. Glenn Forward paused the long green flag run, sliding off the top of turn four to bring out the caution with 62 laps completed. The next restart saw more of the same, with Sheppard holding steady out front and now Mat Williamson in third.

With 20 laps remaining, Sheppard was beginning to back up to Jeremy Wilder and Williamson, with Wilder closing to three car lengths. On lap 81, Demetrios Drellos got sideways in turn four right in front of the leaders, causing Sheppard to check up briefly. Not checking up at all was Jeremy Wilder, who drove around Sheppard to take the lead. It wasn’t over, as Sheppard was hot on Wilder’s tail.

Sheppard first returned fire on lap 86, peeking up to the door on Wilder as the pair raced through turns one and two. Lapped traffic was now Sheppard’s friend, as Wilder encountered a couple of cars up high, allowing Sheppard to draw even on laps 88 and 89. With ten laps to go, Sheppard got the bite he needed off of turn four to complete the pass and regain the lead.

“One of the lapped cars almost spun out, and I thought he was going to come straight across the track and hit me,” noted Sheppard. “I locked up the brakes, and Jeremy got a run and went right around me. I had to try something, and I hadn’t run much of the low groove in three and four, and I had to make it work. I made it work maybe two of five laps, but it was just enough to get back out front. I didn’t know where I wanted to be, I didn’t want to run high, I didn’t want to run low, I didn’t know. Just tried to hang on.”

Wilder wasn’t laying over, with Sheppard’s rear bumper receiving more attention than an attractive girl at a bar. Coming to complete lap 94, Sheppard slipped up exiting turn four, allowing Wilder to draw alongside. However, Sheppard held him off.

Wilder was also under attack from Mat Williamson, who was just trying to find a lane not occupied by Sheppard or Wilder to mount a charge. The top three were glued together the final five laps, with Sheppard using all the track he could to keep Wilder at bay. With the white flag waiving, Wilder was ready for one last swing.

Sheppard entered turn one in the middle, drifting higher exiting turn two. Wilder did the opposite, closing to Sheppard’s door at the exit of turn two. Sheppard cleared Wilder down the backstretch and darted to the bottom entering turn three, allowing Wilder his preferred lane up high. Both drivers bounced through the final turns wide open, with Wilder getting a monster run exiting turn four. The two drag raced side by side to the finish, with Sheppard beating Wilder by .042 for the New Yorker 100 win.

A foot and a half was all that separated Jeremy Wilder from his first DIRTcar 358 Modified Series win. It was close, but no cigar for Wilder.

“I’m sure it was a fun race to watch,” stated Wilder. “It’ll be one of the races I’ll remember. Matt raced me great, and while the track conditions weren’t ideal, everyone had to race on it and I think it was part of the show tonight. You had to race around, pick different lanes, traffic got tough and we were right there.”

Kyle Kiehn and Mike Button led the 28-car Broedel Energy Sportsman starting field the green flag with grabbing the early lead. Button would remain the leader after a couple of quick cautions in the early portion of the 20-lap main event. While Button was looking for his first Utica-Rome win in over a decade, it was sixth place starter AJ Filbeck making moves to gain the third spot by the end of the second circuit, Filbeck pressured second place running Kiehn for the next handful of laps, finally slipping by on lap seven.

Filbeck’s charge continued as he immediately caught front running Button and as the field hit the halfway point the of the event, Filbeck completed his charge to the front as he went around Button for the top spot. Filbeck would lead the remainder of the event, holding off several late challenges Kyle Inman. Filbeck would score the opening night win over Inman, Kiehn, Dave Marcuccilli, and Tommy Collins Jr.

Nick Stone took command of the Ted’s Body Shop Pro Stock 20-lap main event, charging from his fourth-place starting spot to lead the opening lap. Stone’s run ended on the fifth circuit as his left front tire came off the car, which handed the lead over to Pete Stefanski. Stefanski would only lead lap six however, as Shane Henderson slipped by as lap seven was scored.

Defending track champion Mike Welch was the next driver to get by Stefanski, and he immediately set his sights on the leader Henderson. Welch repeatedly showed his nose to the Henderson but was unable make the pass. With five to go, Welch dove underneath Henderson in turn one and was able to slide up in front of Henderson as they exited turn two. Welch would lead the remaining circuits to grab the win over Henderson, Stefanski, Travis Welch, and Bill Knapp.