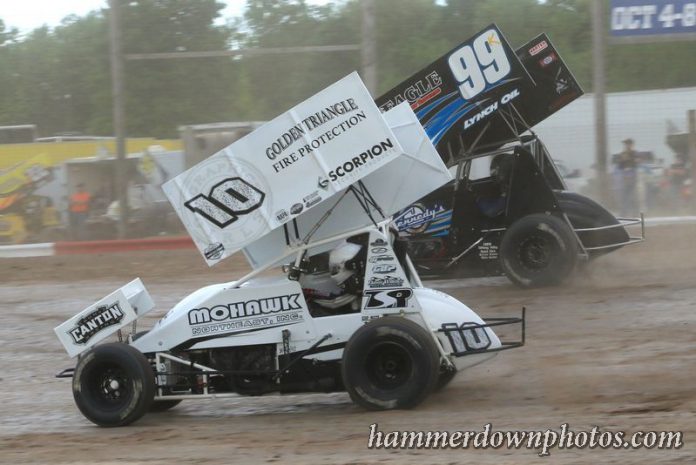 VERNON, NY – The Memorial Day tradition continues this Sunday, May 27, at Utica-Rome Speedway when the winged warriors of the Lucas Oil Empire Super Sprints make their visit of the season at the famed Vernon oval. Broedel Energy and Turn One will present the action that will also include a full program of DirtTrackDigest.com DIRTcar 358-Modifieds, Broedel Energy DIRTcar Sportsman, Ted’s Body Shop DIRTcar Pro Stocks, and Rookie Sportsman.

Mother Nature has not been kind to local fans as three of the first four events have been lost to rain but the one show for the DirtTrackDigest.com 358-Modifieds that was completed was an exciting affair. Jeremy Wilder put on a spirited battle with reigning champion Matt Shepperd only to have Sheppard prevail in the closing laps back on May 13. Wilder was just .042 seconds behind at the checkered flag with Mat Williamson close behind in third. Larry Wight, Billy Dunn, Jimmy Phelps, Tim Fuller, Rocky Warner, Marc Johnson, and Erick Rudolph rounded out the top 10.

Some of the best 360 Sprint drivers in the northeast will descend on to Utica-Rome Speedway this Sunday to try to claim the $2,000 top prize. After three events on the Lucas Oil Empire Sprints trail, defending series champion Jason Barney is on top of the standings over Coleman Gulick, Paul Kinney, Jonathan Preston, Matt Tanner, Billy VanInwegen, Matt Billings, Dylan Westbrook, Paulie Colagiovanni, and Mike Mahaney. Most of the top 10 are expected to be in attendance plus Chad Miller, Brett Wright, Shawn Donath, Dave Axton, Danny Varin, and Kelly Hebing. As always when the Sprints are in action on the big half-mile, it should be another action-packed show.

In the Broedel Energy Sportsman, AJ Filbeck was the opening night winner as he charged by Mike Button in the later stage of the event. Kyle Inman, Kyle Kiehn, Dave Marcuccilli, Tommy Collins Jr., Button, Matt Janczuk, Alan Fink, Stephen Denton, and Chris Mackey chased Filbeck across the line. Another solid field of DIRTcar Sportsman is expected to be on hand of the big holiday event.

Mike Welch and Shane Henderson put on a crowd pleasing battle for the win on May 20 in the Ted’s Body Shop DIRTcar Pro Stocks, with Welch earning the hard fought win. Pete Stefanski, Travis Welch, Bill Knapp, Jim Normoyle, Mike Kazlauskas, Aaron Page, Ernie Staelens, and Jerry Streeter round out the top 10 positions. The Pro Stocks always put on a fantastic show as they battle side by side around the Vernon oval.


Addison Bowman was the opening night victor in the Rookie Sportsman.

Pit gates will open for this exciting show at 3 p.m. while the grandstands will open at 3:30 p.m., with racing slated to begin at 6 p.m. Adult admission will be $22 with Seniors, Students, and Military admission set at $18. Kids under 16 will be admitted to the grandstands for free. Grab a friend and show them what all the buzz is about and bring them to Utica-Rome Speedway for some exciting short track racing.