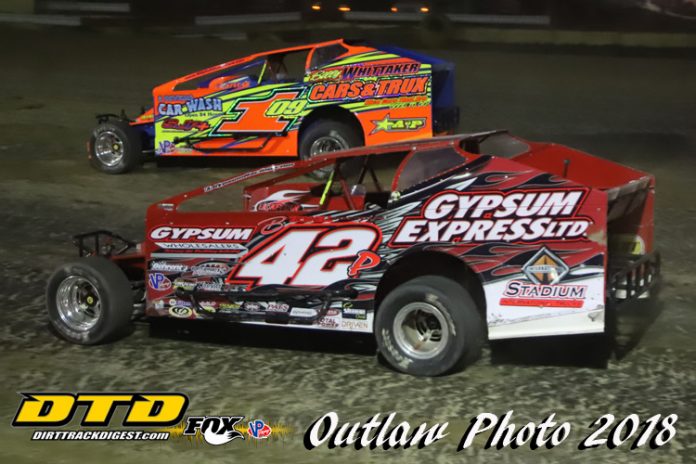 VERNON, NY- After weather claimed it’s fifth of six events this past Sunday at Utica-Rome Speedway, track officials are hoping for a break in this weather pattern as they prepare for another exciting this Sunday June 3. The King of Dirt Series for the 358-Modifieds, Sportsman, and Pro Stocks will be action along with the Rookie Sportsman on Wilber-Duck Chevrolet and Turn One LLC night.

Last season, Erick Rudolph and Matt Sheppard both won hotly contested events in the pair of visits by the King of Dirt 358-Modifieds Series. Last July, Rudolph bested a talent laden 43-car field, beating Marc Johnson, Alan Johnson, Ryan Susice, and Jessey Mueller to the checkered flag. When the series returned in August, Matt Sheppard into an unfamiliar CG Morey car but found himself in a familiar position as he sat in victory lane at the end of the night. Sheppard scored the win over Rudolph, Marc Johnson, Mike Mahaney, and Jeremy Wilder. Another stellar field is expected this Sunday as drivers look to capture the $2,000 top prize. In the season opener for the DirtTrackDigest.com 358-Modifieds, Sheppard held barely held off a relentless Wilder for the win

One driver has dominated whenever the King of Dirt Sportsman Series has invaded the Utica-Rome Speedway, but that will change this Sunday. Rocky Warner claimed every KoD Sportsman event at the Vernon oval but has made the move up to the 358-Modified division. That makes this Sunday’s $1,000 to win main event a wide open affair as some of the top Sportsman drivers in the region will try to stake claim to the winner’s check. In the lone Broedel Energy Sportsman main completed this season at Utica-Rome, AJ Filbeck bested a solid field of cars to claim his first win of 2018.

Last season, the King of Dirt Pro Stock Series made two stops to the historic Vernon oval with Rob Yetman and Chuck Dumblewski scoring the big wins. Whenever the Pro Stocks hit the spacious Utica-Rome surface, it is an exciting show of wheel to wheel and fender to fender action as the Pro Stocks typically put on one of the best shows of any given night. Will a KoD invader come in and steal the $600 winner’s share or with one of the Utica-Rome faithful keep the money home? Find out this Sunday as another solid field of cars is expected. Mike Welch was the winner of the opening night event for the Ted’s Body Shop Pro Stocks.

The 358-Modifieds, Sportsman, and Pro Stocks in attendance will all be awarded show up points towards the season long standings.

The Rookie Sportsman are also scheduled. On May 13, Addison Bowman took the opening night win over Ted Starr and Casey Cunningham.

Pit gates will open this Sunday, June 3, on Wilber-Duck Chevrolet and Turn One LLC night at 3 p.m. with the grandstand gates swinging open at 3:30 p.m., while racing is set to begin at 6 p.m.

Adult admission for the night’s racing action will be $18 for adults with Seniors, Students, and Military pricing set at $15. Kids under 16 are free.