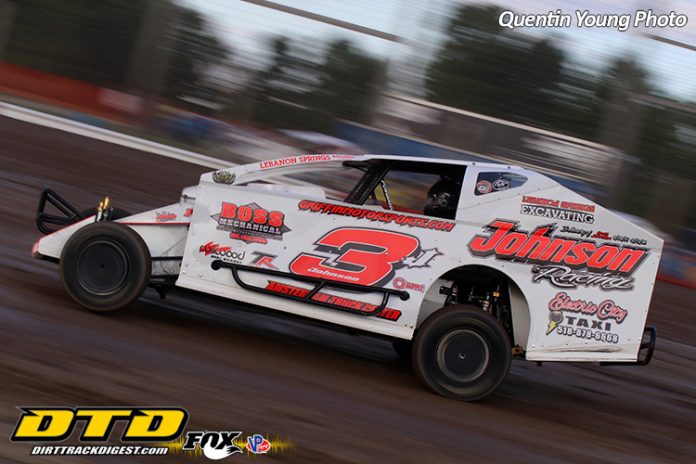 Billy Shantel Jr. would lead the opening circuit of the DirtTrackDigest.com 358-Modified 30-lap main event from his pole starting spot, with fourth place starter Jeremy Wilder making the pass to lead the talented field on the second circuit. Seventh place starter Marc Johnson would move into the third spot on lap four, and after a five lap battle with Shantel, he would grab the runner-up spot and attempt to chase down the leader Wilder.

Wilder and Johnson would put on a crowd pleasing battle for the lead for several laps and as lap 16 was being scored, Johnson edged ahead to be scored the leader. Wilder would not give up easily and spent the next couple of circuits trying to regain the lead, but Johnson was too strong and steadily began to pull away.

With about 10 circuits remaining, eighth place starting Bobby Herrington began to make his presence felt as he started to pressure Wilder for second. Wilder and Herrington ran side by side for the spot for several laps with Wilder holding the advantage the start/finish line. When the checkered flag flew, it was Johnson scoring his first career Utica-Rome Speedway win with Wilder hanging on to second over Herrington, Billy Dunn, Jack Lehner, Bobby Varin, Pat Ward, Shantel, Rocky Warner, and Billy Whittaker.

George Dyer and AJ Digsby brought the Broedel Energy Sportsman feature down to the green flag, and it was Digsby that gained the early edge by leading the first two circuits. Lap three saw AJ Filbeck drive by to grab the lead with eighth place starter Rocco Leone following Filbeck to the front. Leone would pressure Filbeck for the lead for a couple circuits, but eventually Filbeck would begin to pull away. A caution flag on lap 15 would give the field a shot at the leader, but Filbeck would power away to his second win of the season. Leone would hang on for a strong second place finish with 13th place starter Matt Janczuk making a late run to grab the final podium position. Dave Moyer and Charlie Tibbitts would fill out the top five positions.

The Ted’s Body Shop Pro Stocks 20-lap feature saw sixth place starter Travis Welch use a power move on the top of the track to drive by the top five to take the lead on the initial lap. Mike Welch moved into the runner-up spot on lap five and for the next handful of laps, it was the Welch and Welch show up front as the duo raced side by side for the lead, with Travis narrowly holding the lead each lap. Just past halfway, Travis would begin to open up a lead which he would on to for the remainder of the race. Mike would finish in second ahead of Shane Henderson, Bill Knapp, and Mike Kazlauskas.

Claude Hutchings Jr. jumped out to the lead at the drop of the green flag to begin the 20-lap Open Sportsman invitational with fellow front row starter Jim Rothwell giving chase. A couple of yellow flags slowed the pace, but on each restart, Hutchings was up to the task as he would lead the rest of the way to take the win. Rothwell would finish in second followed by Craig Pritchard, Brandon Kuhn, and Jim Walsh.

The Rookie Sportsman 15-lap feature finished out the racing action with Casey Cunningham beating Scott Mallette and Alexis Jacobs to the checkered flag to score his first ever win.

Next up on the Utica-Rome Speedway half-mile oval is the “Friday Night Double” featuring the Arctic Car All-Star Circuit of Champions for the 410 Sprints plus a special $2,000 to win event for the 358-Modifieds. Some of the best Sprint Car drivers in the country are expected to be in action for this rare Friday night event including Tony Stewart, Sammy Swindell, Dave Blaney, Jac Haudenschild, Carson Macedo, Aaron Reutzel, and more plus some local drivers including Mike Mahaney, Coleman Gulick, and Paulie Colagiovanni. For more information on this exciting event, visit us on Facebook, Twitter, or our website at www.uticaromespeedway.com. The speedway office can be contacted by calling (315)829-4557.