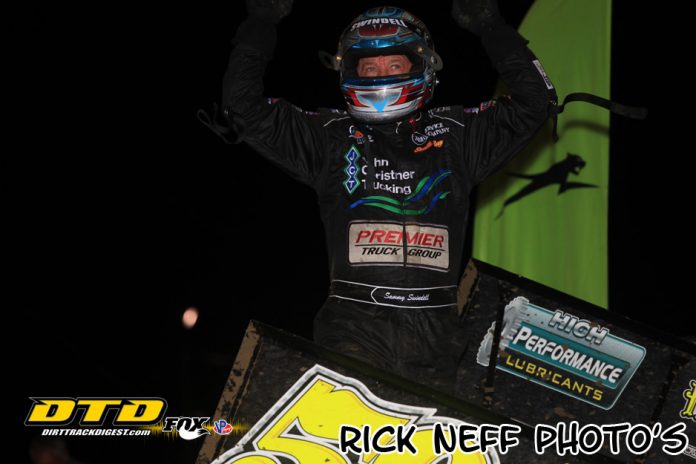 This year is one of the most competitive to date for the All Stars with 15 different drivers having claimed victories and a mere 18 points separating the top three drivers in the season long championship chase. Aaron Reutzel, Clute TX, is only four points ahead of Lemoore CA’s Carson Macedo, and eighteen points ahead of defending All Star Champion, Chad Kemenah, Findlay OH.

Those three among a score of others will be competition to a driver that was considered one of the big three in 410 Sprint Car racing. When you talk modern era of Sprint Car racing, you talk about Swindell, Doug Wolfgang and Steve Kinser.

Swindell is the most recent winner of an All Stars event, having captured the 30 lap contest at the 34 Raceway in West Burlington IA in July.

So far in 2018 Swindell has raced about 40 times with six victories, 22 top fives and a total of 26 top 10s. He has raced in 410 and 360 competition with multiple racing organizations throughout the country.


Last year when the All Stars invaded the Empire State in late summer, Swindell had a successful swing, having won one event, at the Orange County Fair Speedway, Middletown, and placing third in the other two, those being held at Outlaw Speedway, Dundee, and the Lebanon Valley Speedway, West Lebanon.

Slammin’ Sammy Swindell has he has affectionately been called has raced in Sprint Cars, all three of NASCAR’s top series and dabbled with Indy Cars. He has raced a dirt Modified at the New York State Fairgrounds, having once set fast time for the prestigious Super Dirt Week Modified event. Swindell also has been victorious in the Super Nationals Sprint Car portion at the Moody Mile.

Swindell has been known as a self-taught engineer, noted for his craftsmanship and ability to think outside the box with his racing machines.

During his career Swindell has won 294 World of Outlaw main events, in addition to 26 All Star Circuit of Champion races. He has three World of Outlaw point titles and five Golden Driller trophies for winning the prestigious Chili Bowl Midget Race Car event.

Always a threat when he enters the pit area, with the regular traveling Artic Cat All Stars, Swindell will add to the excitement of the Friday August 17th event.

For more information including complete pricing, please log on to www.uticaromespeedway.com. Information can also be found on our Facebook and Twitter page. The speedway office can be contacted by calling (315)829-4557.